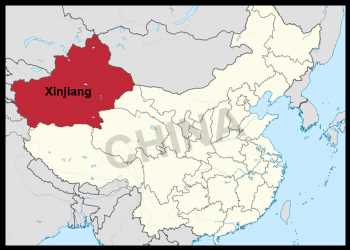 A new law that gives U.S. authorities increased powers to block the import of goods linked to forced labor by Uyghurs and other persecuted groups in China came into force Tuesday.

Under the Uyghur Forced Labor Prevention Act (UFLPA), entities both inside and outside the Xinjiang Uyghur Autonomous Region (XUAR) who seek to import to the U.S. must show that no part of their product was manufactured using slave labor.

Since 2017, Chinese authorities have committed crimes against humanity against Uyghurs and other Turkic Muslims in the northwest Xinjiang region, detaining as many as one million people and subjecting detainees and others to forced labor inside and outside Xinjiang.

“Today is an important day in the fight to stand up against the Chinese Communist Party’s genocide and forced labor of Uyghurs and predominantly Muslim ethnic groups in the Xinjiang Uyghur Autonomous Region (XUAR),” four members of the Congress who drafted the Bill said.

“The United States is sending a clear message that we will no longer remain complicit in the Chinese Communist Party’s use of slave labor and egregious crimes against humanity,” said U.S. Senators Marco Rubio (R-FL) and Jeff Merkley (D-OR), as well as U.S. Representatives Jim McGovern (D-MA) and Chris Smith (R-NJ).

All four lawmakers are leading members of the bipartisan, bicameral Congressional-Executive Commission on China.

The new law creates a presumption that goods made in whole or in part in Xinjiang, or produced by entities in China linked to forced labor, are not eligible to be imported into the United States.

The US Customs and Border Protection Agency has already issued guidance to importers on the law’s implementation. The guidance states that importers are expected to map their supply chains down to the raw material level to identify whether their products are made wholly or in part in Xinjiang or by entities linked to forced labor.

The guidance also clarifies that companies importing products from outside China should still investigate their full supply chain given the risk that goods were produced with forced labor in China before being transferred to third countries.

Credible research has linked a wide range of products imported into the US to forced labor in China, and Xinjiang specifically, such as the cotton in major clothing brands and the polysilicon in solar panels, according to Human Rights Watch.

Several imports from the resource-rich region, including cotton and tomatoes, have already been banned in the United States.