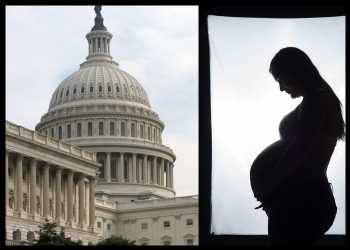 The Women’s Health Protection Act, a Democrat-led legislation to codify U.S. women’s reproductive rights including the right to abortion nationwide, failed to pass in the Senate after it fell short of the 60-vote threshold to avoid filibuster.

All the lawmakers, except Joe Manchin, voted in party line, resulting in 49 votes in favor and 51 votes against the Bill.

The Democrat Senator from West Virginia joined all 50 Republicans in opposing the procedural vote, presided over by Vice President Kamala Harris.

The Women’s Health Protection Act protects access to reproductive health care and would guarantee the right to choose nationally safe abortions, including in the case of rape and incest.

In a statement issued after the vote, President Joe Biden said, “This failure to act comes at a time when women’s constitutional rights are under unprecedented attack – and it runs counter to the will of the majority of American people.”

He blamed the Republicans in Congress – not one of whom voted for this bill – for having “chosen to stand in the way of Americans’ rights to make the most personal decisions about their own bodies, families and lives”.

To protect the right to choose, voters need to elect more pro-choice senators this November, and return a pro-choice majority to the House, according to Biden. “If they do, Congress can pass this bill in January, and put it on my desk, so I can sign it into law,” he added.

Biden vowed that his Administration will not stop fighting to protect access to women’s reproductive care, and will continue to defend women’s constitutional rights to make private reproductive choices as recognized in Roe v. Wade.

In light of the leaked Supreme Court decision draft overturning Roe v. Wade, there were reports that Republicans in the House and Senate will introduce legislation to enact a nationwide six-week ban on abortion.

Nearly two-thirds of Americans are against this, according to recent polls.