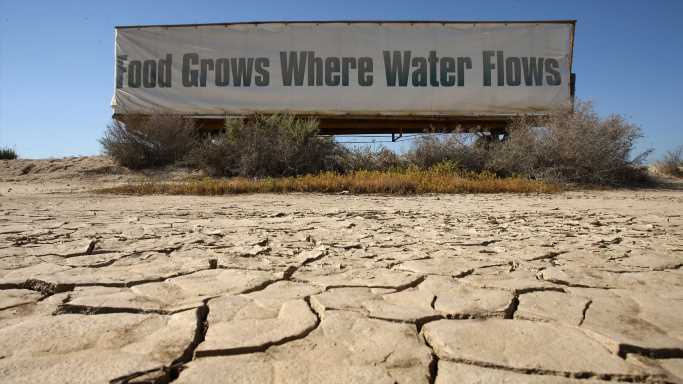 Droughts have come and gone over the course of U.S. history. The worst periods of drought were in the 1950s and 1930s, though the droughts of the Dust Bowl era of the ‘30s remain the most extreme. Over the past 50 years, climate conditions have been generally wetter than average but getting drier since 2000. Now, droughts are back with a vengeance, with global climate change exacerbating conditions.

Over half of the landmass in the lower 48 states and Hawaii is experiencing abnormally dry or drought conditions, with 30 of the 50 states registering some level of drought. To identify the states with the worst drought, 24/7 Wall St. reviewed data from the U.S. Drought Monitor. We ranked the 18 states registering some extreme or exceptional drought conditions by the percentage of land area in extreme or exceptional drought as of the week ending May 9, 2022.

The largest proportion of land area in extreme or exceptional drought is in the Southwest and West, areas that are also suffering from low levels of precipitation and high temperatures, extending drought conditions.

The current drought in the Southwest has lasted from 2000, with short periods of reprieve, making it the longest and driest spell of this length for the region since at least 1900 – with a good chance of continuing until 2030, according to a new study published in Nature Climate Change. The Colorado River, a critical water source, is suffering as a result, with its two famous reservoirs, Lake Mead and Lake Powell, at their lowest levels in history.

While the Southwest has been hit hardest, particularly New Mexico, with 79.1% of its land affected by extreme or exceptional drought, and Texas, with 50.9% of its immense landmass affected, drought conditions are also persisting elsewhere. In the West – in California, Oregon, and Washington – the inhospitable climate is threatening this year’s crops, which are heavily reliant on snowpack for irrigation. This year, snowpack is down 25% from long-term averages in Oregon and 30% in California. (States experiencing harsh drought conditions may also have wildfires. These are the 30 most destructive wildfires in the U.S. this century.)

Beyond the West and Southwest, the mountain states of Colorado, Idaho, Montana, Nevada, and Wyoming are among the 18 states enduring the harshest drought conditions. A few states in the Plains and the South are also on the list. Perhaps most surprising is that the tropical state of  Hawaii, otherwise famous for its reliably agreeable climate, is one of the states on the list, though a relatively small percentage of its population and 3.1% of its land is affected. (Climate change also affects water levels. These are cities around the world that will soon be underwater.)