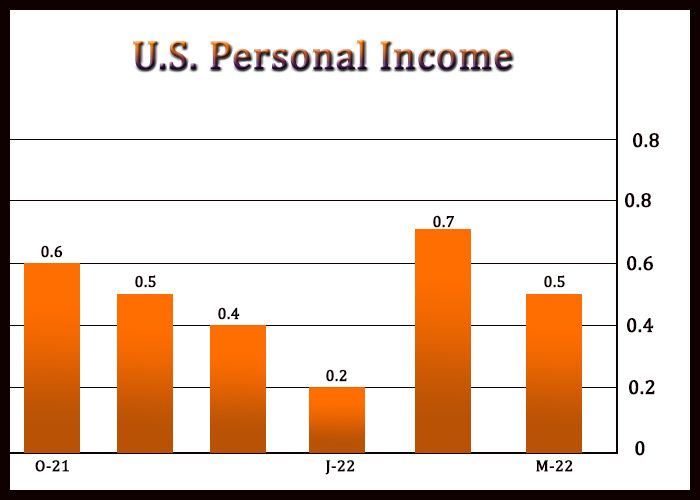 A report released by the Commerce Department on Friday showed U.S. personal income increased by slightly more than expected in the month of March, while U.S. personal spending jumped by much more than anticipated.

The Commerce Department said personal income rose by 0.5 percent in March after climbing by an upwardly revised 0.7 percent in February.

Economists had expected personal income to rise by 0.4 percent compared to the 0.5 percent increase originally reported for the previous month.

The report also showed personal spending jumped by 1.1 percent in March after advancing by an upwardly revised 0.6 percent in February.

Personal spending was expected to increase by 0.7 percent compared to the 0.2 percent uptick originally reported for the previous month.

Excluding price changes, real personal spending edged up by 0.2 percent in March after inching up by 0.1 percent in February.

“Higher prices, a constrained supply of goods, and a lessening of Covid fears led consumers to further pare back their purchases of goods while they continued to indulge in services,” said Lydia Boussour, Lead U.S. Economist at Oxford Economics.

With spending jumping by much more than income, personal saving as a percentage of disposable income slid to 6.2 percent in March from 6.8 percent in February.

Meanwhile, a reading on inflation said to be preferred by the Federal Reserve showed the annual rate of core consumer price growth slowed to 5.2 percent in March from 5.3 percent in February.

“While inflation is taking a larger bite out of households’ income, it is also encouraging a rotation of spending from goods to services which should help spur consumption growth in the months ahead,” said Boussour.