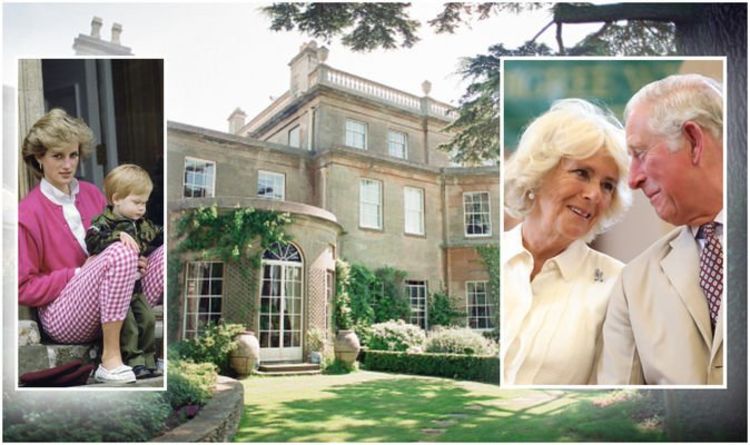 Prince Charles and Camilla have shared various glimpses inside their homes in the past, but official photos released in the 1980s gave royal fans a glimpse into how Highgrove House, Charles’ country home in Gloucestershire, is decorated. While Charles and Camilla have a main residence in London, Clarence House, they also have a country retreat in Gloucestershire. Highgrove House is the location of choice for the royal couple when they do not have any official engagements in the capital.

Prince Charles bought the property in 1980 and he first lived there with Princess Diana and their two sons Prince William and Prince Harry.

The nine-bedroom, six-bathroom mansion is renowned for its beautiful décor and stunning gardens. What’s it like inside?

Charles posed in the room in 1982, revealing cream walls and a cream patterned sofa with blue and green patterned cushions.

At one side, there was a dark chestnut wood table with framed photos, a glass bowl and a cream desk lamp on top, as well as an additional wooden table positioned in front of a white sash window.

In 1980, just before Prince Charles moved into the property in August, a full photo of the living room was unveiled.

It showed a floral sofa with matching curtains and various separate armchairs.

A 1980s photo of the dining room revealed a large table with space for six guests and more floral curtains.

A series of family photos were released in 1986. One showed Princess Diana playing with Harry and William in the garden on a children’s climbing frame and slide.

Princess Diana and Harry were photographed in the gardens with a Shetland pony. The area was framed with wooden fencing.

The family also had their own swimming pool.

An exterior shot of the property revealed it was covered in climbing plants, while the front door was cream with a glass panel at the top.

In 2005, Prince Charles and Camilla welcomed Ty Hafan Children’s Hospice into their home.

Photos revealed that Charles and Camilla had kept much of the same interiors as seen in the original photos, although they seemed to have switched out the large floral settee for a more muted patterned version.

Prince Charles often releases pictures of Highgrove on social media, and royal fans are usually impressed by what they see.

“I know they all love visiting there for family luncheons and dinners with strolling through the gardens with these adorable grandchildren.