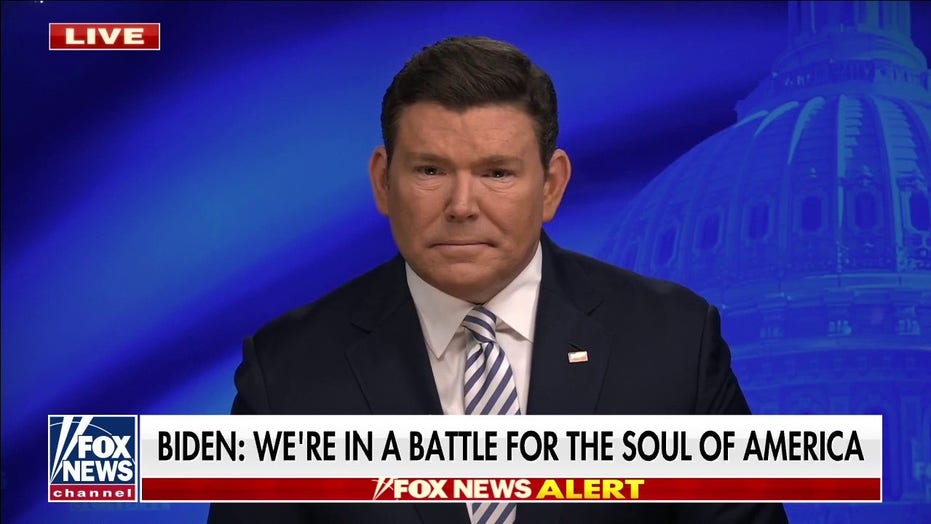 Fox News anchor Bret Baier reacts to the tone of the president’s speech marking one year since the Capitol riot.

The starting gun in the next White House race doesn’t fire for 10 more months, until after the 2022 midterm elections.

But President Biden’s most muscular comments to date regarding former President Donald Trump – as Biden gave a much talked-about address in Statuary Hall marking the one-year anniversary of the deadly attack on the U.S. Capitol – appeared to serve as a preview for a potential 2024 rematch between the two leaders.

The speech seemed to be a turning point for the president, who during much of his first year in the White House has directly avoided targeting his predecessor in office. But on Thursday, without using Trump’s name, the president accused him of inciting the mob that stormed the Capitol on Jan. 6, 2021 in hopes of disrupting congressional certification of Biden’s Electoral College victory in the 2020 election.

“We must be absolutely clear about what is true and what is a lie. And here is the truth: The former president of the United States of America has created and spread a web of lies about the 2020 election,” Biden charged, as he pointed to Trump’s repeated, unfounded claims that the 2020 election was “RIGGED” and “stolen” due to massive voter fraud.

“He’s done so because he values power over principle, because he sees his own interests as more important than his country’s interests and America’s interests, and because his bruised ego matters more to him than our democracy or our Constitution,” the president argued. 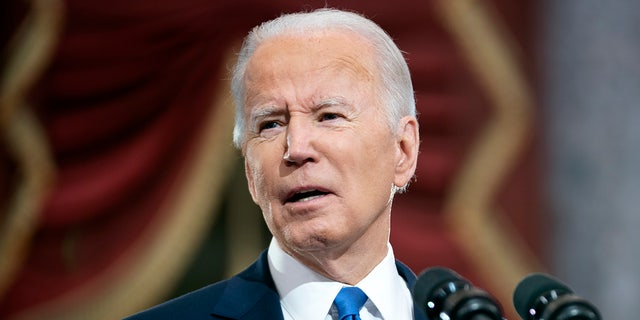 WASHINGTON, DC – JANUARY 06: US President Joe Biden gives remarks in Statuary Hall of the U.S Capitol on January 6, 2022 in Washington, DC. One year ago, supporters of then President Donald Trump attacked the U.S. Capitol Building in an attempt to disrupt a congressional vote to confirm the electoral college win for Joe Biden.
(Photo by Greg Nash-Pool/Getty Images)

And Biden emphasized that Trump’s “done what no president in American history…has ever, ever done: He refused to accept the results of an election and the will of the American people.”

Stressing that Trump’s “a defeated former president,” Biden accused him of “trying to rewrite history.” And looking ahead to what sounded like the next presidential election campaign, Biden pledged to “defend this nation. And I will allow no one to place a dagger at the throat of our democracy.”

Trump, who canceled his originally planned news conference on Jan. 6, fired off numerous statements throughout the day.

The former president argued that Biden “used my name today to try to further divide America,” labeling it “political theater.”

And Trump claimed that the president’s speech was “just a distraction for the fact Biden has completely and totally failed.”

Looking ahead to this November’s midterms, when the GOP hopes to win back majorities in the House of Representatives and the Senate, Trump said that “to watch Biden speaking is very hurtful for many people…this is an election year and MAGA Republicans should get elected and work with me to fix this horror.”

After his address, Biden told reporters that he referred to Trump in his speech as a “former president” rather than directly name him because he “did not want to turn” marking the one-year anniversary of the attack on the Capitol “into a contemporary political battle between me” and Trump.

But in some ways, what Biden said on Thursday sounded like the opening shots in the next White House race.

Expect Trump to fire back when he’s in front of cameras next weekend, as he heads to the crucial battleground state of Arizona to hold his first campaign style rally of 2022.

And then there were four

The Republican National Committee (RNC) has narrowed the list of contenders to host its 2024 presidential nominating convention down to four major cities.

The RNC confirmed to Fox News that staff from their site selection committee will be traveling to the four finalist cities to survey the convention plans. And committee members will discuss the 2024 convention cities, as well as the nominating calendar and presidential primary debates, when the RNC holds its winter meeting, early next month in Salt Lake City.

The news of the four finalists was first reported by Politico.

Former Secretary of State Mike Pompeo says he dropped 90 pounds over the past nine months thanks to exercise and dieting.

Pompeo told the New York Post that he hit a tipping point in June when he stepped on the scale and saw that his weight was nearing 300 lbs. for the first time in his life.

The Fox News contributor, a former congressman from Kansas who served as CIA director and then America’s top diplomat during the Trump administration, traveled to all four of the early voting presidential primary and caucus states last year, sparking plenty of speculation he’s mulling a 2024 White House run.

But the 58-year-old Pompeo said his weight loss isn’t about any possible presidential run.

“The truth is, I’m really getting ready for 2044 and hoping I’ll be around in 2054,” he told the New York Post, pointing to potential grandchildren. “My son’s getting married in July, and I wanted to be healthier and be around for what I hope the Lord will bless us with as grandkids before too terribly long.”