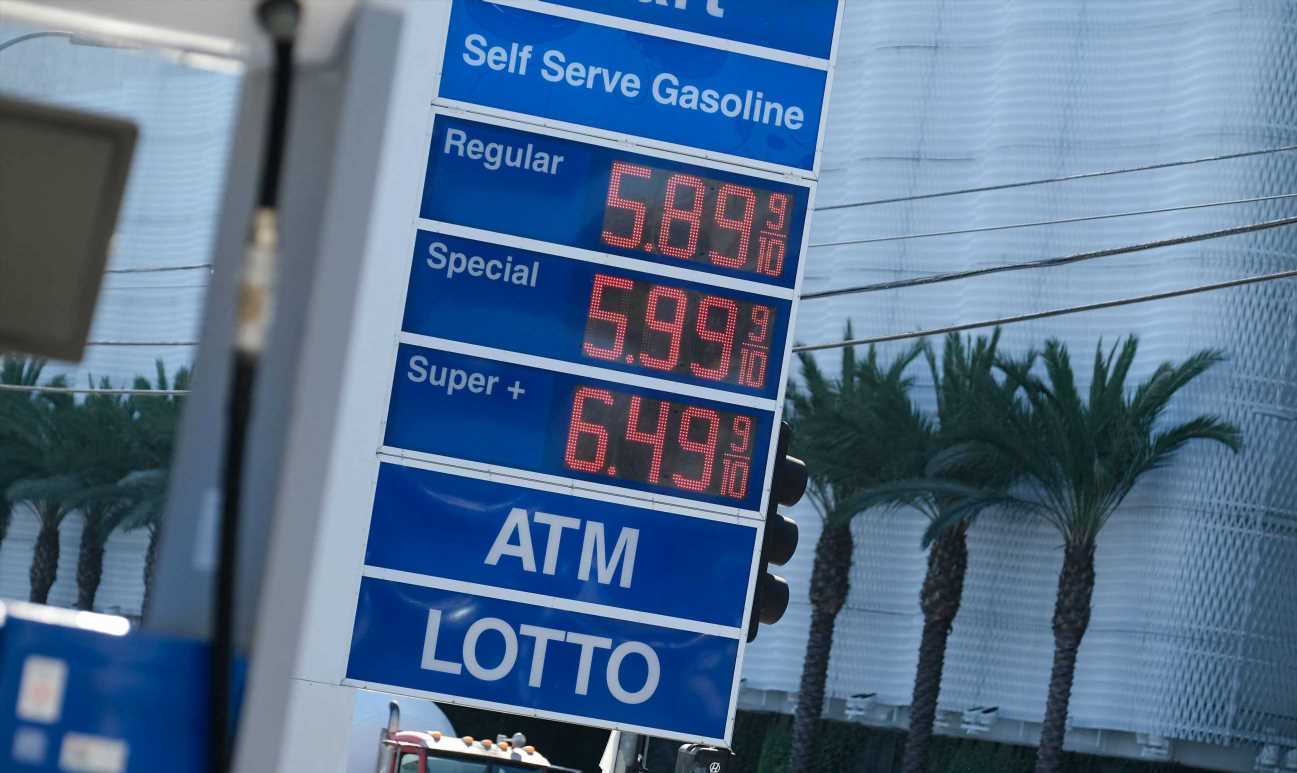 A popular trick at gas stations this fall is to slap a sticker featuring President Joe Biden pointing to the price per gallon and saying, "I did that."  But the real answer has more to with Wall Street than Pennsylvania Avenue.

The root cause of today's high gas prices isn't politics: It's financial pressure on oil companies from a decade of cash-flow losses that have made them change financial tactics. Investment in new wells has dropped more than 60%, causing U.S. crude oil production to plummet by more than 3 million barrels a day, or nearly 25%, just as the Covid virus hit, and then fail to recover with the economy. For an oil-drilling sector that lost 90% of its stock value from 2012 through early last year, it hasn't been the toughest call in the world.

"For really the decade that ended in 2019 or 2020, there was an energy revolution and what did the energy sector get? They were the worst performers in the S&P 500,'' said Rob Thummel, portfolio manager at Tortoise Capital in Overland Park, Kansas.

A Dec. 6 report by progressive advocacy group Accountable.US says 16 of 24 large U.S. energy companies have raised their dividends this year (through third-quarter earnings reports), while 11 made special dividend payouts totaling more than $36.5 billion of what the group says were $174 billion in industrywide profits. Indeed, one new financial trick popular with energy companies is a "variable dividend" that allows high payments in good times and a small base payout when profits are lower, Third Bridge analyst Peter McNally said.

The group only found $8 billion in share buybacks, but Exxon Mobil and Chevron alone pledged to buy back as much as $20 billion of stock in the next two years when they disclosed third-quarter earnings. Chevron's annual dividend is now 4.7% of the company's value, more than triple the average of 1.3% paid by members of the Standard & Poor's 500 Index.

"Strong operating cash flow enabled us to deliver on our financial priorities, including the resumption of share repurchases," Chevron CFO Pierre Breber said on the company's earnings call. "Cost efficiency and capital efficiency are essential to navigate commodity price cycles."

"The equity holders said, 'you've got to give me cash,'" according to McNally. "Now the companies are being run to generate free cash more than growth."

Much discussion, including on social media platforms like Twitter, as to why crude oil and gasoline prices have spiked has focused on politics, with followers of former President Donald Trump claiming he kept gas prices low before Biden made them climb. But if there are political leaders to take the credit, or the blame, according to Tom Kloza, president of Oil Price Information Service, the people most responsible are not Americans, but Russian President Vladimir Putin and Saudi Arabia's Crown Prince Mohammed Bin-Salman.

After oil prices tanked in 2014 and 2015, with the U.S. national average price for gasoline reaching an early-2016 low of $1.72 a gallon, the Organization of Petroleum Exporting Countries linked up with Russia to contain oil production, which had outstripped demand as U.S. production rose to 9 million barrels per day in 2016 from 5 million in 2008. Daily worldwide demand now is about 100 million barrels, according to a report last month by BP.

Production limits by the OPEC+ bloc let gas prices rise slightly during Trump's pre-Covid presidency. Even as U.S. crude production kept rising, peaking at 13 million barrels in November 2019, gas prices, which averaged $2.37 a gallon at Trump's inauguration, stayed between $2.24 and $2.92 until Covid sent them plunging to an April 2020 low of $1.77. That pushed U.S. oil drillers to finally cut production back to 9.8 million barrels per day by February 2021. Meanwhile, OPEC+ continued to hold its own production near-steady.

Another reason is that investment in finding new wells peaked in 2014 and has dropped sharply since, making it hard for drillers to react quickly to an improving economy. According to S&P Capital IQ data, 27 major oil makers tripled capital spending between 2004 and 2014 to $294 billion, ad then cut it all the way back to $111 billion by last year. Once old wells were capped, new ones haven't been available to fill the production gap quickly, explained CFRA Research analyst Stewart Glickman.

The managements of bigger oil companies like Oxy, ConocoPhillips and others are more fiscally conservative than the independents they took over, LeBlanc said. Instead of maintaining debt loads of 2.5 times their annual earnings before deducting interest and non-cash depreciation and amortization charges, or EBITDA, some companies are targeting debt loads of 1 times EBITDA, he said.

Hanging over all of this is pressure from environmentally conscious investors to push carbon emissions lower, and the awareness that gasoline demand will likely erode as electric cars get more popular. "Companies don't know where this is going and don't trust the future too much," LeBlanc added.

With crude still at $70 a barrel, even after a big dip caused by the emergence of the omicron variant of Covid-19, there would seem to be plenty of room to boost production with many areas of the U.S. flush with oil that would cost $50 or less to produce, according to IHS Markit data. And indeed, production has recovered to about 11.7 million barrels per day, helping to spur an 11-cent drop in gasoline prices in the last month.

But the most conspicuous part of the production jump has come from producers whose stock isn't publicly traded, according to experts. Privately owned oil and gas exploration firms are moving faster because they don't have the day-to-day shareholder pressure that has made CEOs and CFOs of bigger drilling companies change their tactics. One sign that the pressure is still working: The number of U.S. oil wells that have been drilled but are not completed, or ready to begin pumping, is still down more than 30% since 2018, according to government data.

The question is how long the restraint by publicly traded oil companies will last. Glickman is betting that it will be durable, with capital spending around $135 billion next year – less than half of 2014's level. Kloza suspects the discipline will break down sooner, helping gas prices keep falling.

The worst combination for gas purchasers would be a quick recovery from omicron, followed by a surge in economic activity and continued low spending. That could pull gas prices toward $4 a gallon again if the economy is strong, according to Glickman, while McNally said consumers could benefit from a recent rise in gasoline inventories.

For shareholders, the outlook is for more dividend hikes to protect 2021 gains in energy stocks, followed by stock buybacks rather than plunging into new drilling — and, ultimately, a shift in investment toward the future that many companies have already telegraphed.

"They'll start spending capex on decarbonization," Thummel said. "For these companies to get investors to return, you have to show a solid cash-flow-making business. It's kind of a prove-it story for the industry."