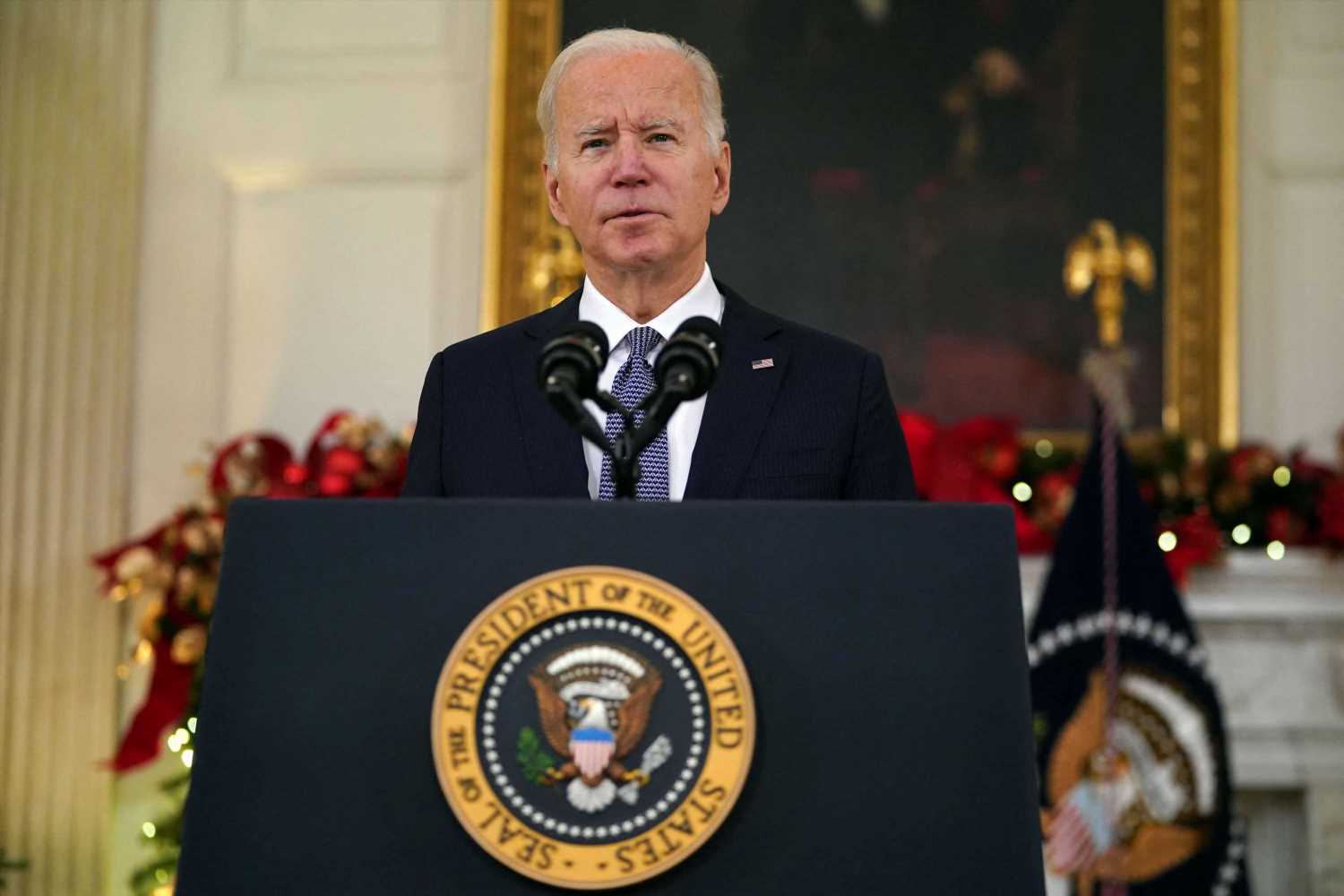 WASHINGTON — President Joe Biden glossed over the weak November jobs report Friday, instead focusing on the low unemployment rate and the yearlong trend of growth and economic recovery.

The U.S. economy created far fewer jobs than expected in November, in a sign that hiring started to slow even before the announcement of the new Covid omicron variant, the Labor Department reported earlier in the day.

Nonfarm payrolls increased by just 210,000 for the month, though the unemployment rate fell sharply to 4.2% from 4.6%. The labor force participation rate increased for the month to 61.8%, its highest level since March 2020.

In a speech at the White House officially billed as "remarks on the November jobs report," Biden skipped over the job creation data almost entirely.

"Today we got the incredible news that our unemployment rate has fallen to 4.2%," he said. "And we're looking at the sharpest one-year decline in unemployment ever."

The apparent disparity between the unemployment rate decline and the relatively weak job growth could be due to a variety of factors.

Several economists noted that the payroll tally used to assess the number of new jobs is different from the self-reported household survey used to arrive at the overall unemployment rate.

They said the apparent disconnect between a nonfarm payroll growth figure of 210,000 and an unemployment rate of 4.2% could in part reflect the differences between the two surveys.

The monthly Bureau of Labor Statistics household survey asks people whether they are currently employed. Thousands of Americans started small businesses from home during the pandemic, and those people would likely consider themselves employed for the purposes of the survey, even though they might only have one or two employees.

By contrast, the headline monthly jobs figure is based off of payroll reports from about 150,000 larger businesses and government agencies. So that survey could fail to capture the thousands of entrepreneurs who started tiny businesses in the past two years.

The result is that the jobs growth figure suggests a weaker economic recovery than the unemployment rate does.

It's not hard to see why the president chose to focus on the unemployment rate, and not on the jobs number, which he mentioned only once in passing. Biden also noted that initial jobs tallies this year have seen substantial upward revisions.

The October and September estimates were bumped up a combined 82,000 in the report released Friday.

"Because of the extraordinary strides we've made, we can look forward to a brighter, happier new year ahead," Biden said.

Yet even as he touted progress made in the past year, the president did not shy away from addressing the widespread anxiety among voters about inflation, supply chain issues and Covid.

"Families are anxious," he said. "Anxious about Covid, anxious about the cost of living and the economy more broadly, they're still uncertain. I want you to know that I hear you. It's not enough to know that we're making progress. You need to see it and feel it in your own lives and around your kitchen table and in your checkbooks."

Stocks fell on a combination of the weaker-than-expected jobs numbers and fears that the stronger unemployment rate would convince the Fed to speed up its tapering measures.

Responding to the November report, Commerce Secretary Gina Raimondo told CNBC that investors should look at the big picture and not any particular month. Job growth so far this year has topped 6.1 million. The 2021 average monthly gain of 555,000 jobs (not including November) positions the U.S. economy for full recovery from the pandemic — a return to the February 2020 unemployment rate of 3.5% — by the end of 2022.

This is earlier than many economists predicted.

Sectors showing the biggest gains in November included professional and business services (90,000), transportation and warehousing (50,000) and construction (31,000). Even with the holiday shopping season approaching, retail saw a decline of 20,000.

Worker wages climbed for the month, rising 0.26% in November and 4.8% from a year ago. Both numbers were slightly below estimates.

Still, economists generally shared the president's view that the November jobs data overall had more good news in it than bad news.