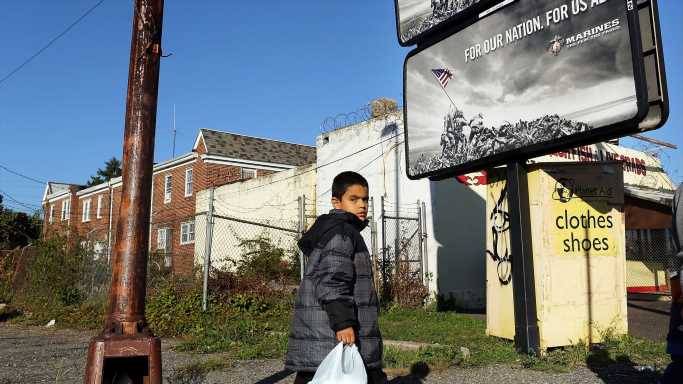 The World Bank predicts that the pandemic will have pushed somewhere between 88 million and 115 million people into extreme poverty some time this year. A number of Americans could certainly be among those falling into poverty this year, and in some parts of the country, COVID-19 has had an even greater impact. There are several dozen U.S. counties where more than a third of the population live in poverty.

Many Americans owe months of back rent, and many still face an unstable job situation or ongoing unemployment. According to a survey conducted between late June and early July by the Center on Budget and Policy Priorities, 27% of American adults, 63 million in all, said that it was somewhat difficult or very difficult to afford their usual expenses.

To determine the county with the highest poverty rate in every state, 24/7 Wall St. reviewed five-year estimates of the percentage of people who live below the poverty line from the U.S. Census Bureau’s 2019 American Community Survey. For reference, the Department of Health and Human services sets the official poverty threshold at an annual income of no more than approximately $26,000 for a family of four.

According to the 2019 five-year estimate from the census,13.2% of Americans live below the poverty line. The 50 counties and county equivalents on this list have poverty rates of at least 33% and as high as 55%.

People struggling with poverty can be found all over the country, but the places where poverty is especially common are concentrated in 14 states, primarily in the South in states that have among the highest poverty rates. The state of Mississippi is home to 11 of the 50 counties on this list.

While poverty rates do not correspond perfectly with median incomes, counties with higher poverty rates tend to have lower incomes. They also tend to have higher shares of residents receiving Supplemental Nutrition Assistance Program benefits, formerly known as food stamps.