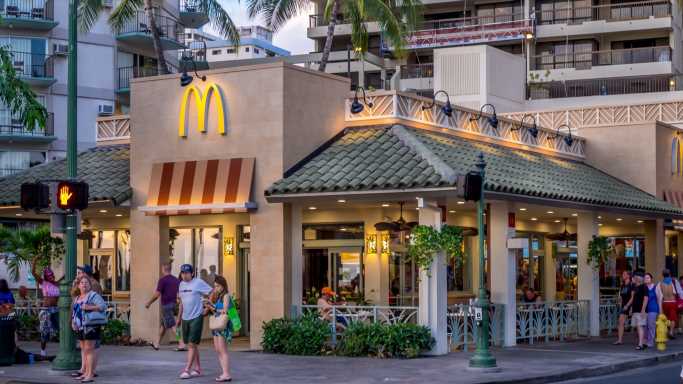 Among the largest retail chains in America, fast-food companies hold many of the top spots based on the number of outlets. There are over 197,000 fast-food restaurants overall. McDonald’s has over 13,000, while Pizza Hut has over 6,700.

And fast food is a huge business. McDonald’s revenue last year was over $19 billion. Its market capitalization is just shy of $200 billion.

Fast-food locations vary widely by state. Based on an absolute count, of course, the largest states by population would have the most. Another way to measure is by locations per 100,000 state residents.

To determine the fast-food capital of America (the state with the most outlets of the nation’s 10 most popular chains), 24/7 Tempo reviewed data collected by NiceRx, a patient assistance program and medication access company, using numbers for total fast-food restaurants taken from the U.S. Census Bureau and tracking the nation’s 10 most popular chains as determined by ScrapeHero. Population figures are five-year estimates from the U.S. Census Bureau’s 2019 American Community Survey.

We then ranked the states by their total number of fast-food restaurants per capita belonging to these top 10 chains: Subway, Starbucks, McDonald’s, Dunkin’, Burger King, Taco Bell, Dominos, Wendy’s, KFC, and Dairy Queen.

Hawaii, which has only about 1,500 of those establishments in total, tops our list because, due to the small size of its population, that works out to 97.5 per 100,000 people. That may reflect a local fondness for fast food, but those restaurants also cater to the Aloha State’s many visitors. Interestingly, the number 50 spot is occupied by the other non-contiguous state, Alaska, which has a comparatively few 61.9 of those chain outlets per 100,000 people.

Click here to see all the fast-food capitals of America.