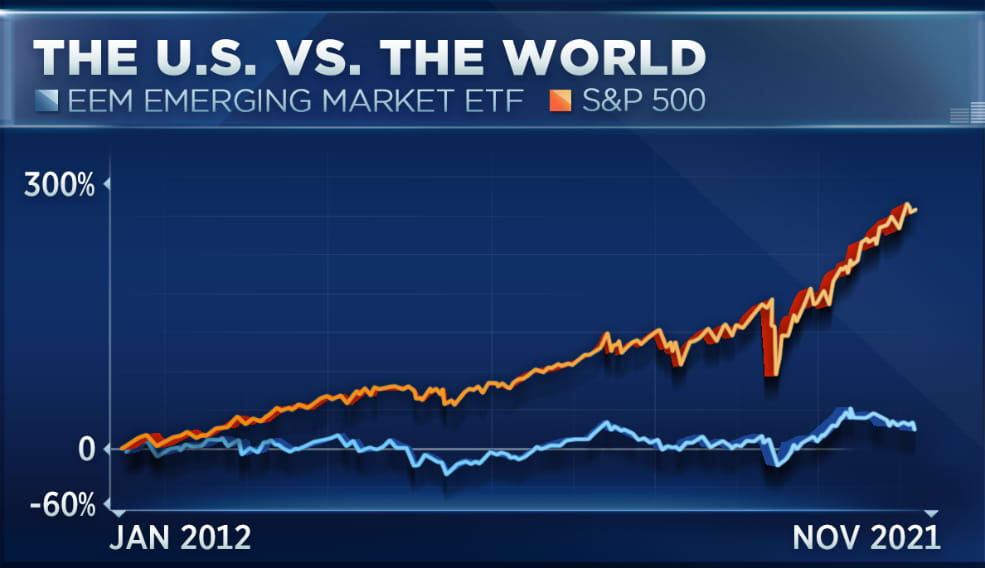 The S&P 500 has had a rough few days, but for emerging markets it's been even worse.

The EEM emerging market ETF has dropped more than 3% in the past week and is down 16% from a February peak. The MCHI China ETF and EWZ Brazil ETF have seen even bigger drops, down 30% from their 52-week highs.

A strong U.S. dollar has kept the pressure on through the summer, while the emergent omicron variant threat and an uneven global economic recovery have contributed to recent losses. Strength in the greenback makes it harder for emerging market economies to service U.S.-denominated debt.

Jeff Kilburg, chief investment officer at Sanctuary Wealth, is closely watching the U.S. dollar to determine how viable emerging markets are as an investment.

"The U.S. dollar index is hovering around 96. As long as it stays under 97, I think there is an opportunity here," Kilburg told CNBC's "Trading Nation" on Tuesday. "We have seen selling pressure in emerging markets as the U.S. dollar has been raising levels since July."

However, Kilburg is not blanket investing in the group — he says it serves investors well to be picky.

Emerging markets' long track record of weakness relative to the U.S. has Inside Edge Capital Management's Todd Gordon on the sidelines, though.

"The underperformance of EEM relative to Western markets is unbelievable. Last time we saw outperformance was 2008 up to 2010. And I just took the last 10 years today, not cherry picking, and the EEM returned 22% versus the S&P's [266%]. So there's no question. We have no international exposure in either of our growth or value portfolios to that EEM ETF," Gordon said.

Gordon adds that China's outsize weighting in the EEM ETF gives him pause, pointing to the country's issues with the Evergrande debt crisis and Beijing's tech crackdown.

"I don't see how that's investable right now. At some point mean reversion will come in and you can invest in it but not right now," he said.