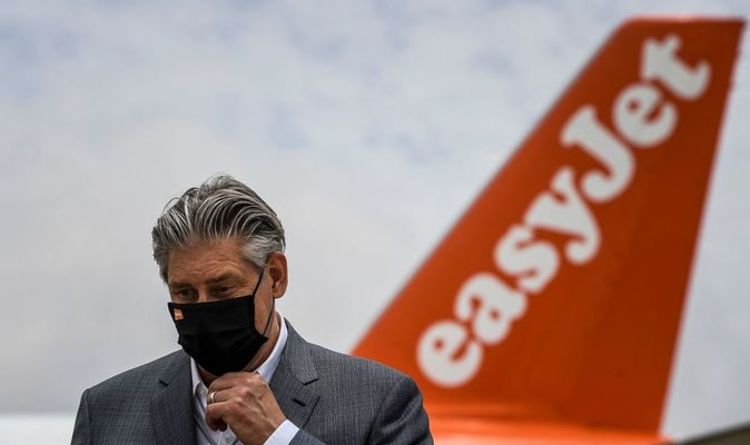 The low cost airline revealed passenger numbers had more than halved over the year with passenger revenue down 57 percent. Flights also had to change to an optimised schedule focusing on domestic flights and Europe where the travellers faced the least restrictions. Investment Director at AJ Bell Russ Mould predicted it could be a “bleak winter” for easyJet with fresh uncertainty over travel restrictions due to the Omicron variant. He said: “What happens if we get variant after variant of COVID-19? There are only so many times that shareholders will bail out airlines with another cash injection.”

Suggesting consolidation of the industry was inevitable he said: “EasyJet has already been subject to a takeover approach thought to be from Wizz Air, and it is no doubt in the sight of other players like International Consolidated Airlines.

“EasyJet is attractive strategically to many other airlines because of its strong position in the Western European market.”

Despite the grim figures easyJet is reporting a more positive outlook ahead with demand increasing for key periods such as Christmas and the skiing season.

Bookings for spring and summer next year are currently already ahead of 2019 levels.

Reflecting this EasyJet is now looking to expansion with slot increases at Gatwick as well as Linate, Lisbon and Porto ahead of summer 2022.

“These initiatives alongside our strong, investment grade, balance sheet provide easyJet with renewed strength to manage any further Covid related travel disruptions, as well as a platform to fast track our growth and deliver strong shareholder returns.”

EasyJet say bookings have already begun to improve as travel regulations stabilised in the second half of this year.

However it is as yet unknown what impact the spread of the Omicron variant might have.

Airlines were particularly badly hit last week as news of the new variant spread and new travel restrictions were imposed.

This morning easyJet’s shares have been down around 2.5 percent.

Sophie Lund-Yates, Equity Analyst at Hargeaves Lansdown, commented that “airlines can’t seem to catch a break” but believed easyJet had some cause for optimism.

She explained: “There are some competitive advantages where easyJet’s concerned.

“The biggest is that it’s a lower cost short-haul carrier, where demand should return at a faster rate than long haul. The group remains confident that capacity will be near pre-pandemic levels by next summer.

“A large pillar of that success comes down to easyJet’s favourable network too, with it holding more popular slots at prized airports.”

Like Ryanair, which recently left its listing on the London Stock Exchange, easyJet is also falling victim to EU foreign ownership rules which require airlines operating within the bloc to be owned by a majority of EU shareholders.

In its results easyJet confirmed only 35.68 percent of its shares were held by EU nationals meaning it has had to suspend voting rights for certain shares held by non-EU nationals.

Those affected will receive a notice in mid-January.