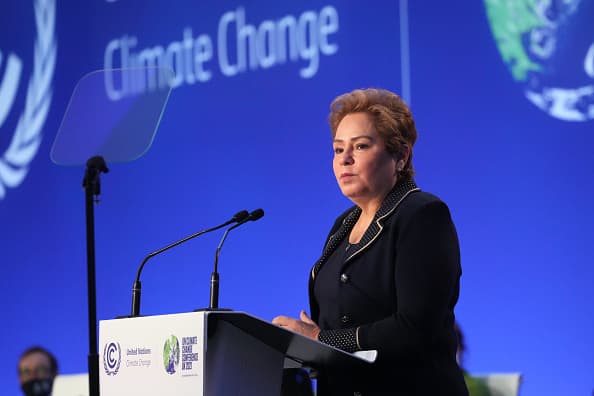 LONDON — There is reason for cautious optimism when it comes to negotiations at the COP26 climate change summit in Glasgow, Scotland, according to the United Nations' climate chief.

The pivotal conference, which the U.K. is hosting between Oct. 31 and Nov. 12, has seen a number of high-profile announcements in its first week.

In addition, 28 more countries joined an international alliance dedicated to phasing out coal, although notable absentees included China, India and the United States.

Bill Gates-backed battery company gets an outperform rating from Cowen

In an interview with CNBC's Steve Sedgwick on Thursday, Patricia Espinosa, the executive secretary of the United Nations Framework Convention on Climate Change, was asked how she viewed the progress made at Glasgow and if it was enough.

"I feel really encouraged by what … we have seen so far," she said. "Of course, we're coming to this conference with the clear message that the numbers we have in terms of emissions are not good," she added. "So that means that we really must come out of here with clarity on how we are going to move forward."

Elsewhere, the Glasgow Financial Alliance for Net Zero said more than $130 trillion of private capital had been "committed to transforming the economy for net zero."

"What we have seen here," Espinosa said, "these 120 heads of state and government … the Finance Day with ministers, heads of international financial institutions, people from [the] private sector also making pledges, announcing initiatives, I think there is … really a reason to be, to be hopeful … cautiously optimistic."

A huge amount is riding on COP26. The U.K.'s official website for the summit states it will "bring parties together to accelerate action towards the goals of the Paris Agreement and the UN Framework Convention on Climate Change."

Described by the United Nations as a legally-binding international treaty on climate change, the Paris Agreement aims to "limit global warming to well below 2, preferably to 1.5 degrees Celsius, compared to pre-industrial levels."

The challenge is huge, and the United Nations has noted that 1.5 degrees Celsius is considered to be "the upper limit" when it comes to avoiding the worst consequences from climate change.

In her interview with CNBC, Espinosa highlighted the ramifications of inaction. A report from the IPCC, she said, had shown that "the scenario of two degrees is … terrible, is catastrophic."

"And the prime minister of Barbados said it in the plenary, she said: 'For us, 2 degrees is a death sentence'," Espinosa added. "So that means that this is really not good enough and we need to be very frank and open about it."