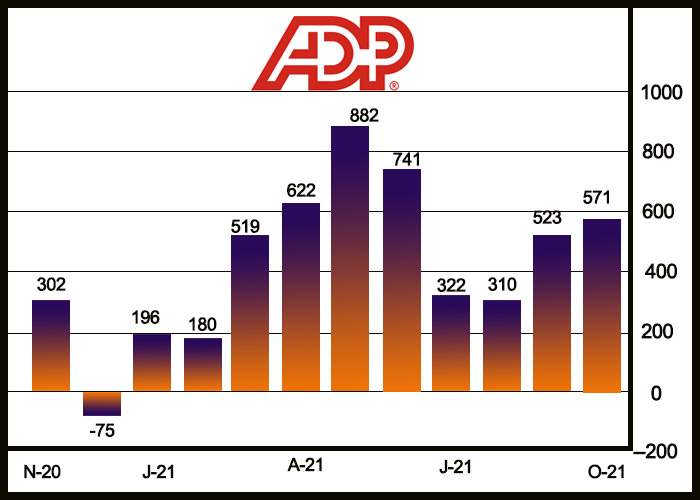 Payroll processor ADP released a report on Wednesday showing private sector employment in the U.S. increased by more than expected in the month of October.

ADP said private sector employment jumped by 571,000 jobs in October after surging by a revised 523,000 jobs in September.

Economists had expected private sector employment to climb by 400,000 jobs compared to the addition of 568,000 jobs originally reported for the previous month.

“The job market is revving back up as the Delta-wave of the pandemic winds down,” said Mark Zandi, chief economist of Moody’s Analytics.

“Job gains are accelerating across all industries, and especially among large companies,” he added. “As long as the pandemic remains contained, more big job gains are likely in coming months.”

The report showed employment at large businesses shot up by 342,000 jobs, while small and medium businesses added 115,000 jobs and 114,000 jobs, respectively.

The bigger than expected increase in private sector employment also came as employment in the service-providing sector spiked by 458,000 jobs.

Employment in the leisure/hospitality sector led the way higher, jumping by 185,000 jobs, while employment in the professional/business services and trade/transportation/utilities sectors also saw notable growth.

On Friday, the Labor Department is scheduled to release its more closely watched monthly employment report, which includes both public and private sector jobs.

Economists currently expect employment to jump by 425,000 jobs in October after rising by 194,000 jobs in September, while the unemployment rate is expected to edge down to 4.7 percent from 4.8 percent.