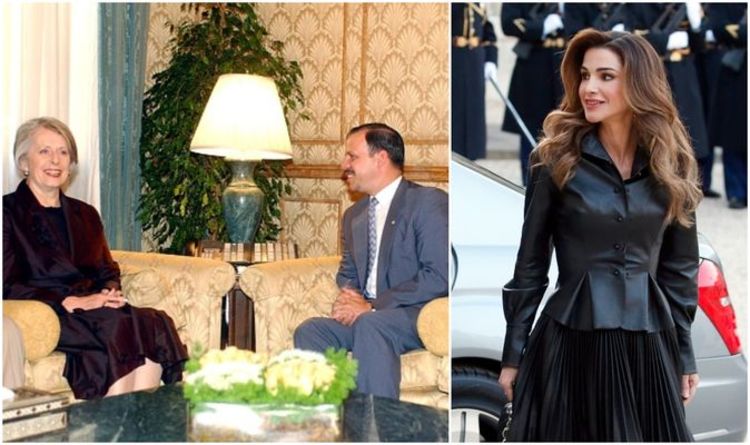 The royal couple married in 1993 and have four children: Crown Prince Hussein, 27, Princess Iman, 25, Princess Salma, 21, and Prince Hashem, 16. King Abdullah and Queen Rania’s official royal property, Raghadan Palace, was constructed in 1926 and became the residence of King Abdullah I, who reigned from 1921 to 1951. The palace was constructed in a traditional Islamic style, with coloured glass windows modelled on the al-Aqsa Mosque in Jerusalem.

The word Raghadan originates from the Arabic verb, “raghad” to reflect a comfortable life.

The woodwork in the palace generally and the Throne Hall in particular was designed to be exquisite.

It became the home of King Abdullah and his family, and was also used as offices for the Royal Court.

It underwent some renovation over the years, including in the late 1980’s following a fire that destroyed the roof in 1983.

The latest restoration and expansion included new flooring in the Throne Hall and to several other rooms.

In particular, the former ceiling fresco in the Throne Hall depicting Islamic art was remade to its original beauty and the same Islamic architectural features of the original building as well as the exterior, were all preserved.

A gallery on the ground floor, known as “al-Maqqar al-A’la”, meaning, a form of a sublime sanctuary, was used by King Abdullah for prayers, and remains like this today.

Today, Raghadan Palace contains one of the most important rooms of the Crown properties.

This is the Throne Hall, used for state occasions such as when the King receives good wishes from dignitaries and the general public during Eid al-Fitr and Eid al-Adha.

It is also used when His Majesty receives members of the Senate and the Lower House, and to deliver their replies to His Majesty’s Speech at the State Opening of Parliament.

The palace also houses some of the official gifts presented to King Abdullah and Queen Rania.

Additionally, the palace serves as a primary location for working meetings between the King and visiting heads of states and dignitaries.

Raghadan is located within the Royal Court compound.

The palace lies on a hill in the old quarter of Amman, Jordan’s capital city.

Although the current King Abdullah and his wife Queen Rania do not always reside in the palace, preferring to live in a family home in the suburbs of Amman, Raghadan continues to play a central role in public life.

It is a primary venue for major ceremonies and meetings between the king and visiting royalty and statesmen.

When King Hussein I died in 1999, it was to the Raghadan that dignitaries from all over the world came to pay their last respects.

The palace is surrounded by several other buildings, including the Basman Palace – used as the private living quarters of King Hussein in the early 1950s, and now houses the offices of the current king.

There is also the Al-Qasr Al-Sagheer, the birthplace of King Hussein I, and location of the offices of Queen Rania.

Queen Rania of Jordan has recently joined forces with Prince William and other leading world figures for his Earthshot Prize.

Her Majesty is a member of the global prize council deciding the winners of the Earthshot Prize, to be announced on October 17 in a glittering London ceremony, which the Duke and Duchess of Cambridge will attend.

In her own powerful words, she said: “When it comes to saving our planet, giving up is simply not an option,” adding she is “humbled and honoured” to be a part of “William’s visionary Earthshot Prize.”