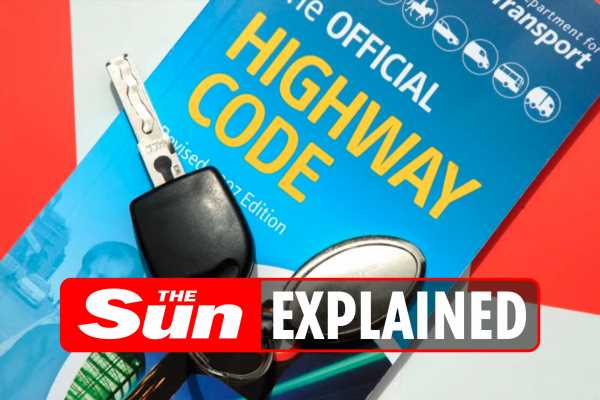 THE HIGHWAY Code has changed TODAY – with 33 updates to rules and two new laws being added.

Here's all you need to know before you hit the road… 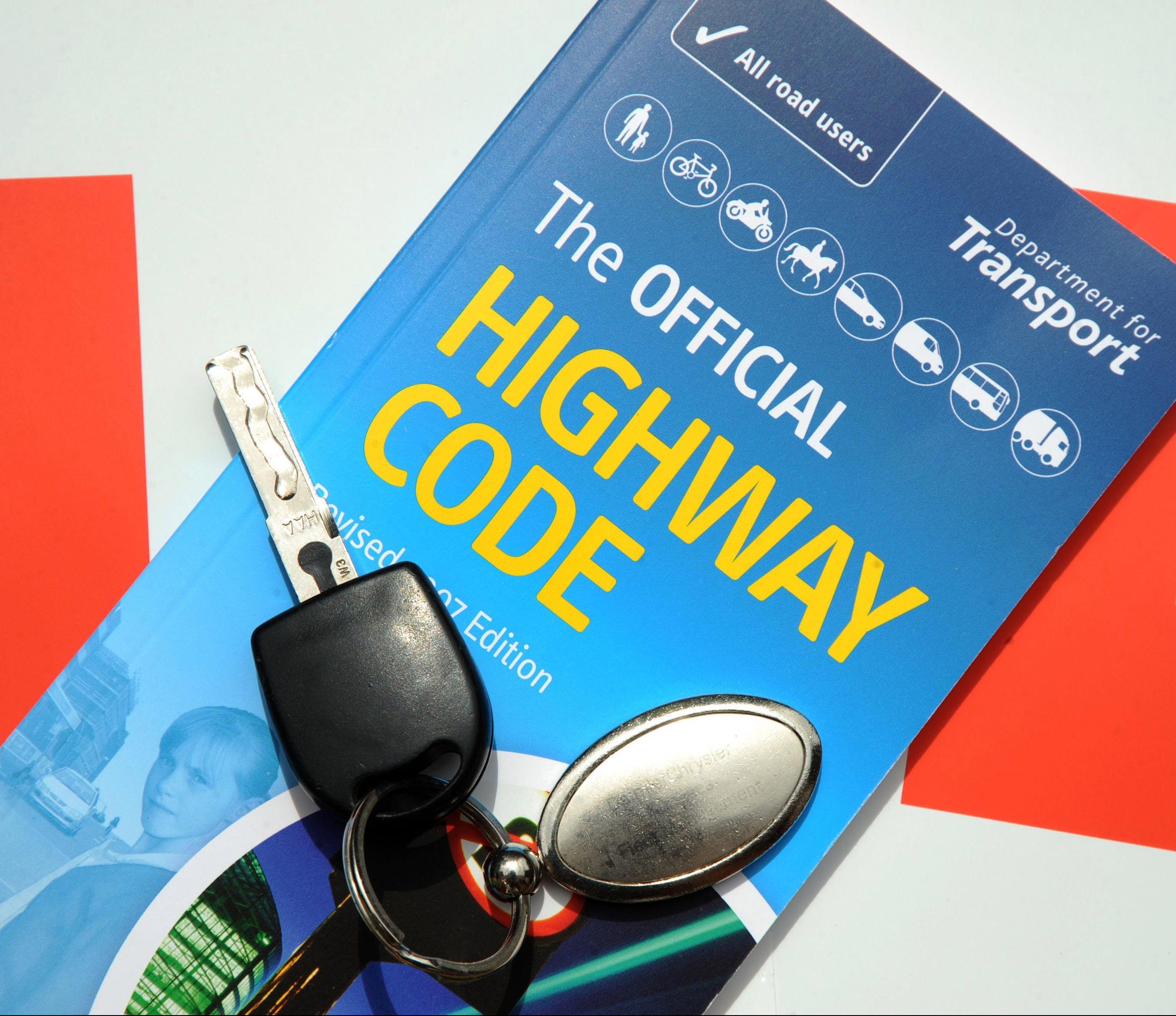 What are the new Highway Code rules 2021?

The new version of the Highway Code include a "hierarchy of road users".

This will ensure that people who can cause the most harm in a collision, such as those in vehicles, bear the "greatest responsibility to reduce the danger they may pose to others".

The hierarchy will be, in order of priority: pedestrians; cyclists; horse riders; motorcyclists; cars/taxis; vans/minibuses, with large passenger and heavy goods vehicles at the bottom.

Pedestrians will have priority on pavements and at zebra crossings.

A new rule makes clear that at a junction, drivers should give way to pedestrians crossing or waiting to cross a road into which or, or out of which, they are turning.

Cyclists will have priority at junctions when travelling straight ahead.

And there is also guidance on safe passing distances and speeds.

The new Code makes it clear that 20mph speed limits must not be exceeded by drivers.

For motorists who get annoyed with middle lane hogging on motorways, a tweak to the rules in 2021 says "you should return to the middle lanes and then the left-hand lane when it is safe to do so".

The Code already runs to more than 150 pages with over 300 rules.

The aim of the changes is also to improve guidance for drivers using motorways, including what to do during a breakdown or incident.

This follows concern over dozens of fatalities on so-called smart motorways, where there is no hard shoulder or the hard shoulder can be converted to live traffic.

Get sufficient sleep before embarking on a long journey.

If you feel sleepy, stop in a safe place. Do not stop in an emergency area or on a hard shoulder of a motorway.

Before setting off. You MUST ensure that you have a valid licence and insurance to drive the vehicle you intend to use.

You SHOULD ensure that:

• You have planned your route and allowed sufficient time for breaks and possible delays.

• You have sufficient fuel or charge for your journey, especially if it includes motorway driving.

It is recommended for emergency use that:

• You have a mobile telephone containing emergency contacts (e.g. breakdown assistance), and have high-visibility clothing.

A speed limit of 30mph (48km/h) generally applies to all roads with street lights (excluding motorways) unless signs show otherwise. 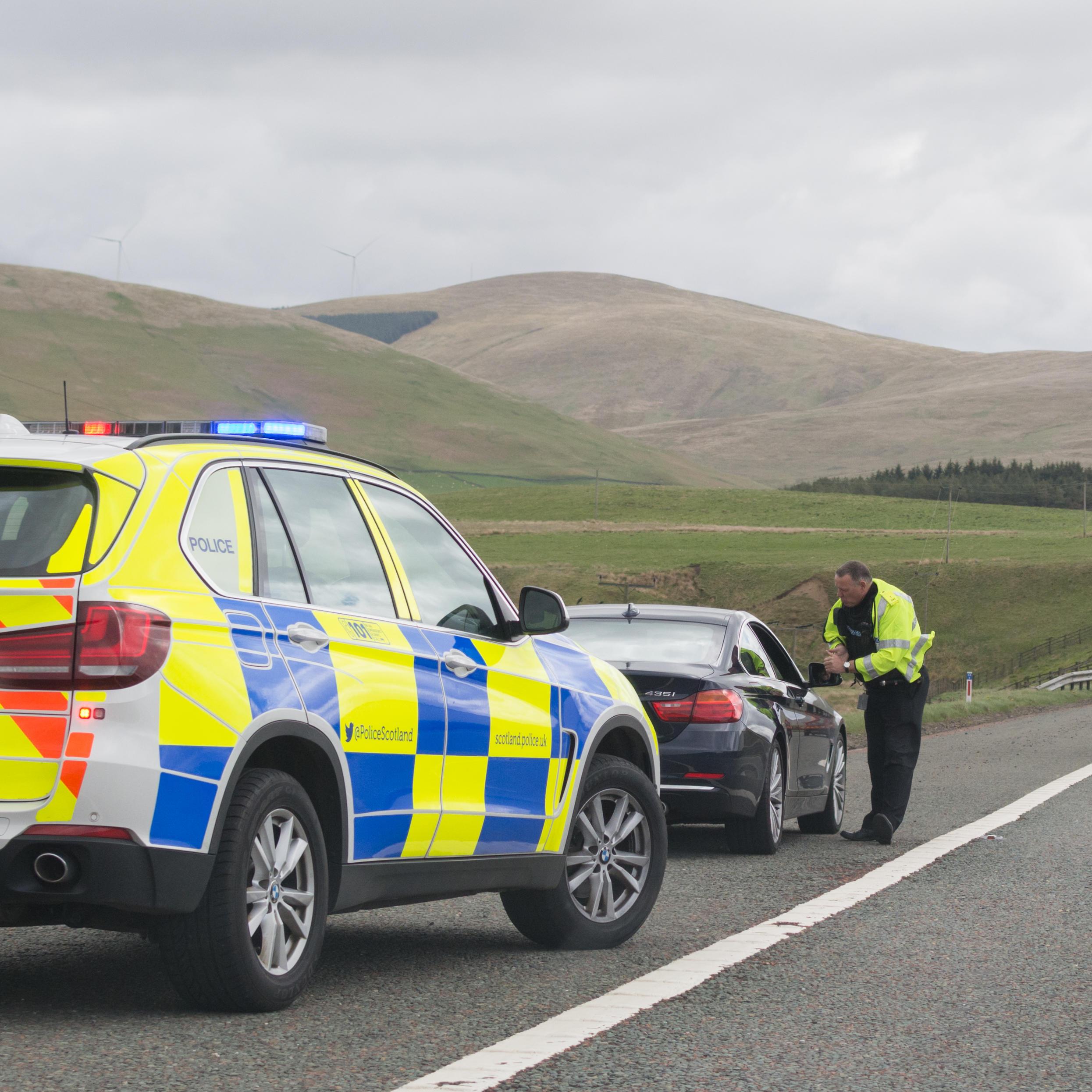 Allow at least a two-second gap between you and the vehicle in front on high-speed roads and in tunnels where visibility is reduced.

The gap should be at least doubled on wet roads and up to ten times greater on icy roads.

Before entering fog, check your mirrors, then slow down.

If ‘Fog’ is shown on a sign but the road is clear, be prepared for a bank of fog or drifting patchy fog ahead.

You MUST NOT stop or park on: 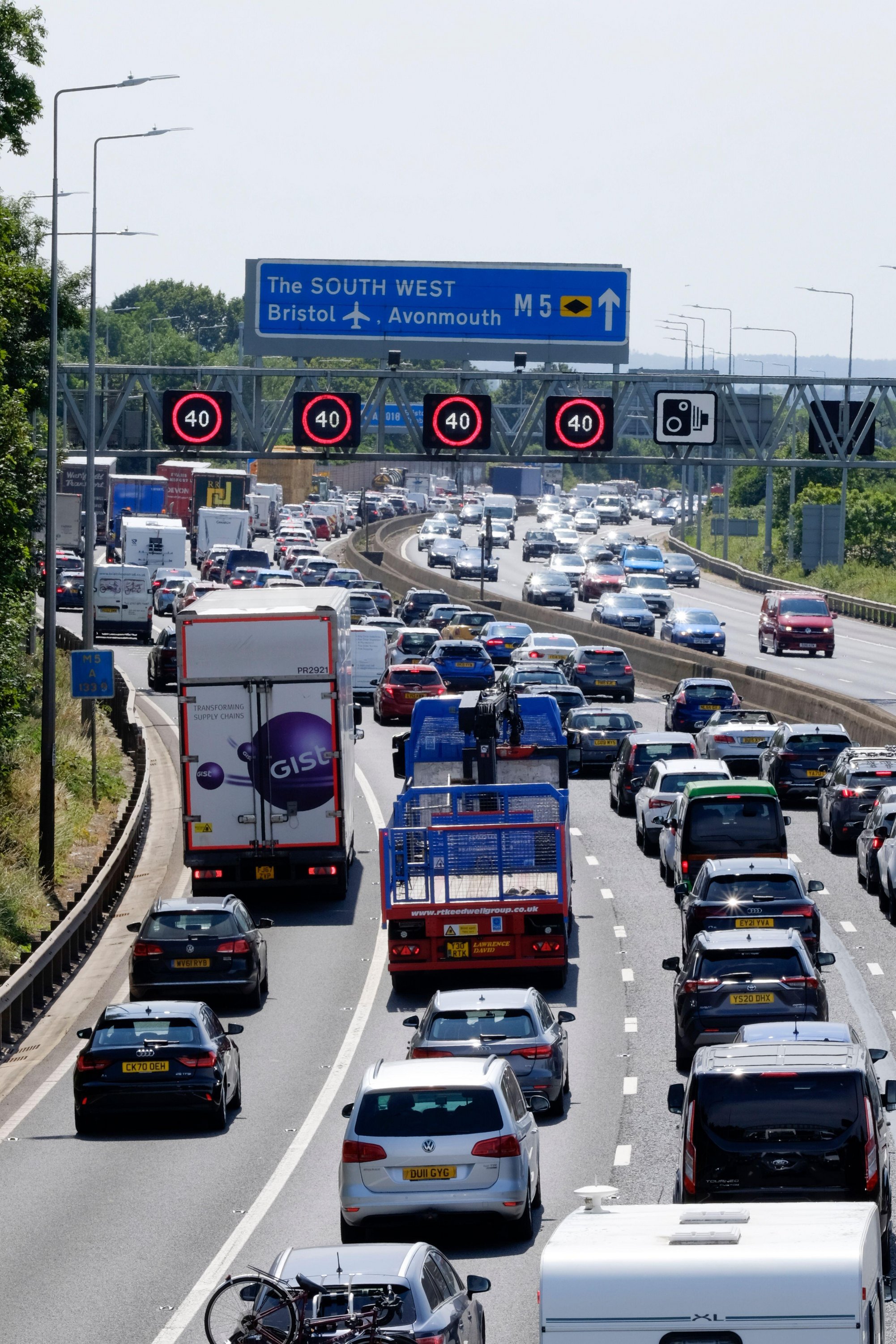 Provisional car licence holders MUST NOT drive on the motorway unless they are accompanied by a DVSA Approved Driving Instructor (ADI) and are driving a car displaying red L plates (or D plates in Wales) with dual controls.

Amber flashing lights. These signals warn of a hazard ahead. You should:

• Reduce your speed, be prepared for the hazard.

• Only increase your speed when you pass a signal that is not flashing, or a sign displaying a national speed limit or the word ‘END’, and you are sure it is safe to do so.

Red flashing light signals and a red ‘X’ on a sign identify a closed lane in which people, stopped vehicles or other hazards are present. You:

• MUST follow the instructions on signs in advance of a closed lane to move safely to an open lane.

• MUST NOT drive in a closed lane.

Where the left lane is closed at an exit slip road, this means that the exit cannot be used.

You MUST NOT exceed a speed limit displayed within a red circle on a sign.

Unless directed to do so by a police or traffic officer, you MUST NOT:

• Reverse along any part of a motorway, including slip roads, hard shoulders and emergency areas.

Keep in the left lane unless overtaking.

• If you are overtaking, you should return to the left lane when it is safe to do so.

Approaching a junction. Look well ahead for signals, signs and road markings. 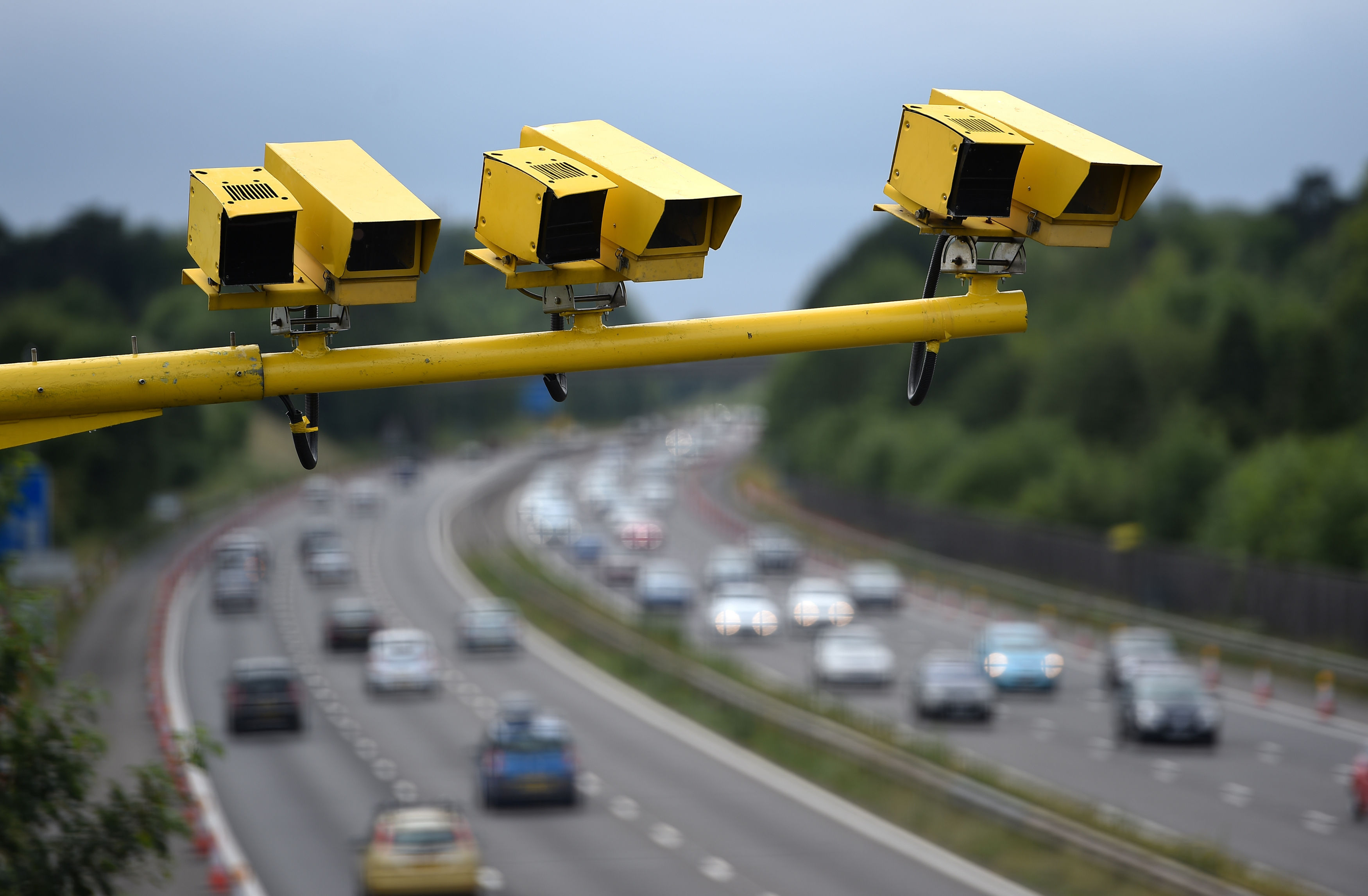 Emergency areas are located along motorways with no hard shoulder or where the hard shoulder can be used as an extra lane (see Rule 269) and MUST only be used in an emergency.

They are marked by blue signs with an orange SOS telephone symbol and may have orange surfacing. 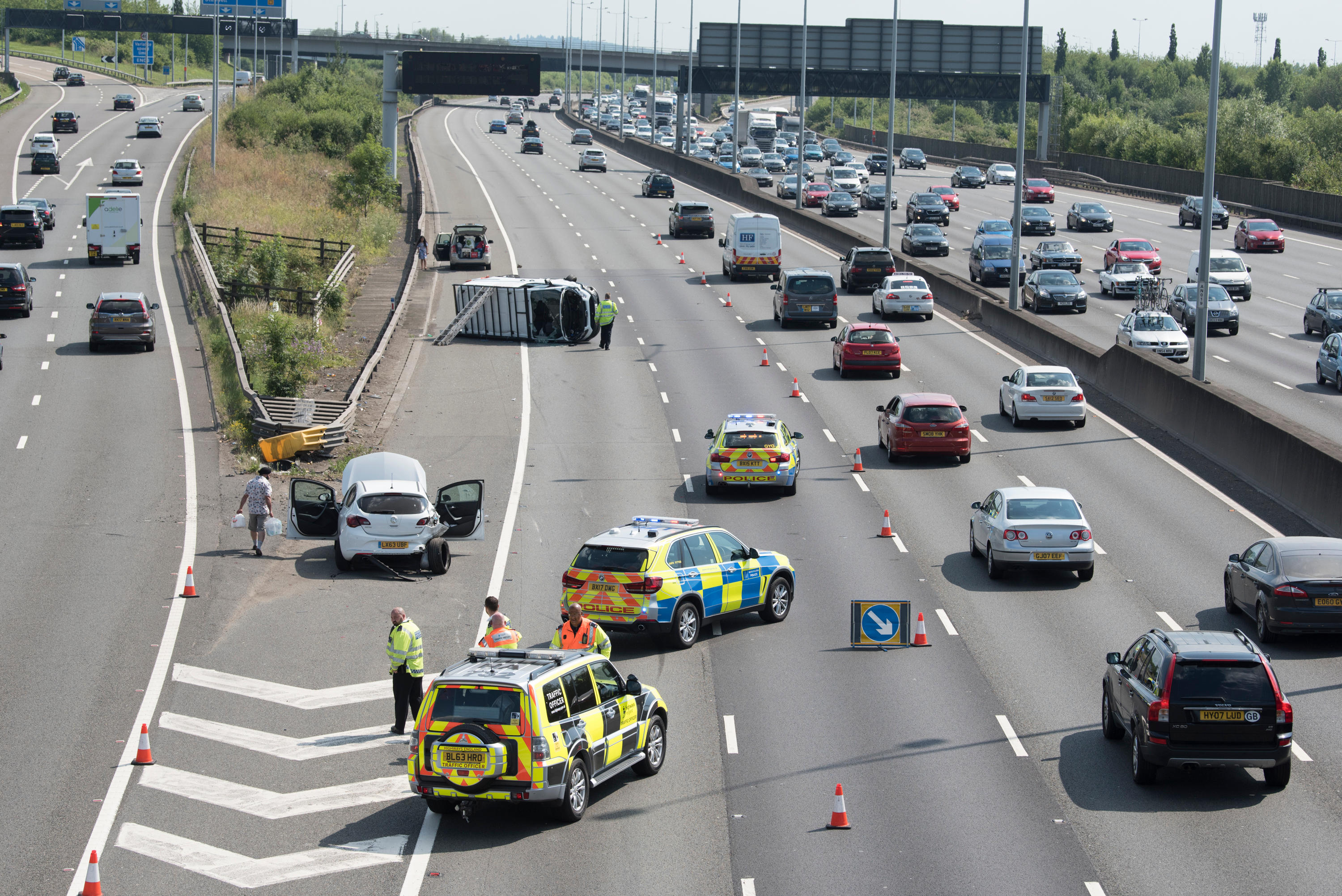 You MUST NOT stop on any carriageway, emergency area, hard shoulder, slip road, central reservation or verge except in an emergency, or when told to do so by the police, traffic officers, an emergency sign or by red flashing light signals.

Do not stop on any part of a motorway to make or receive mobile telephone calls, except in an emergency.

If you need to stop your vehicle in the event of a breakdown or incident, try to stop in a place of relative safety… where you, your passengers and your vehicle are less likely to be at risk from moving traffic.

Be aware that hard shoulders provide less protection than other places of relative safety because they are so close to high-speed traffic.

You and your passengers should, where possible, keep well away from your vehicle and moving traffic.

Otherwise moving traffic could collide with your vehicle, forcing it into you and your passengers.

Also, exit your vehicle by the side furthest from traffic:

If you are involved in an incident or collision or stop to give help:

Stephen Edwards, interim chief executive at Living Streets, said: "The Highway Code currently treats children walking to school and lorry drivers as if they are equally responsible for their own or other people's safety.

"These changes will redress that balance.

"Road users who have potential to cause the greatest harm should take the greatest share of responsibility to reduce the danger they pose."