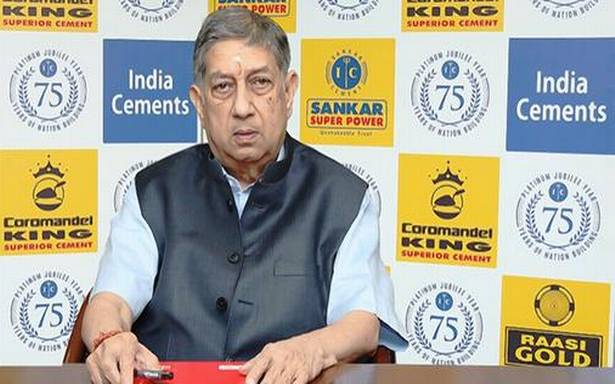 Cement consumption in the country is expected to go up with the Centre raising investments in infrastructure and State governments also spending on housing, irrigation and roads, among other projects, said N. Srinivasan, vice-chairman and MD, The India Cements Ltd. (ICL).

At the firm’s 75th AGM on Wednesday, he said there were signs that the COVID situation was easing and that cement demand was also picking up. He also cited reports of ‘good’ rainfall for the third consecutive year, with the farm sector and the rural economy expected to do better, thus creating more rural demand. There was an increase in house-building and construction activity in urban and semi-urban centres due to relocation of workplaces and increasing work-from-home options, he pointed out.

The new government in Tamil Nadu had started giving a push to housing and infrastructure development, he said. Andhra Pradesh and Telangana governments were also implementing irrigation, road-building and other infrastructure projects and new housing schemes, he added. These developments gave room for cautious optimism for cement demand in the coming months, he said, adding that capacity utilisation would rise in proportion with demand. Asserting that there was uncertainty over the possibility of a third wave, he cautioned: “Therefore, one has to be cautiously optimistic about the immediate future.”

Highlighting that plant capacity utilisation had improved to 50% in Q1 against 35% a year earlier, he said it was slightly better in Q2 and was expected to improve further. To raise capacity, ICL would undertake de-bottlenecking of one or two plants in the South and also set up a new plant in Madhya Pradesh, he said.

At the AGM, shareholders approved Mr. Srinivasan’s re-appointment as MD for five years effective May 26, with requisite majority.