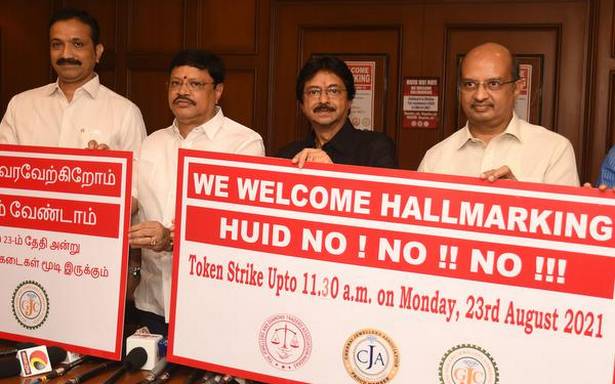 “Chennai is home to over 1,000 jewellery shops employing about 40,000 people direct and indirect,” the statement said.

Jewellers in Chennai would partially close shops on Monday as part of protesting against Bureau of Indian Standards’ (BIS) decision of on the new hallmarking process, gold traders said on Sunday.

The Chennai Jewellers’ Association has extended its support to the nationwide protest to be observed also on Monday as announced by the National Task Force on hallmarking comprising members of the gems and jewellery associations across the country, a press release said.

"Gold marking, a purity certification was voluntary in India. The BIS, made gold hallmarking mandatory from June 16, in about 256 districts across the country that have Assaying and Hallmarking centres. Due to capacity inadequacy 16 to 18 crore pieces were lying idle without hallmarking," Chennai Jewellers Association, president, Uday Vummidi said.

“Chennai is home to over 1,000 jewellery shops employing about 40,000 people direct and indirect,” the statement said.

According to him, there was an estimated three-year backlog as the current capacity of hallmarking centres was only about two lakh pieces a day.

"HUID can pose a threat to a customer’s privacy as the system demands customers to reveal their personal details. We have no problem with hallmarking. We welcome hallmarking since it serves the purpose of ensuring the purity of gold jewels. HUID is not about quality. It is a type of tracking mechanism," he alleged.

The Jewellers and Diamond Traders Association president Jayantilal said, "as it stands today, HUID is arbitrary. It is unfriendly to customers and detrimental to the growth of the industry especially the small and medium jewellers."