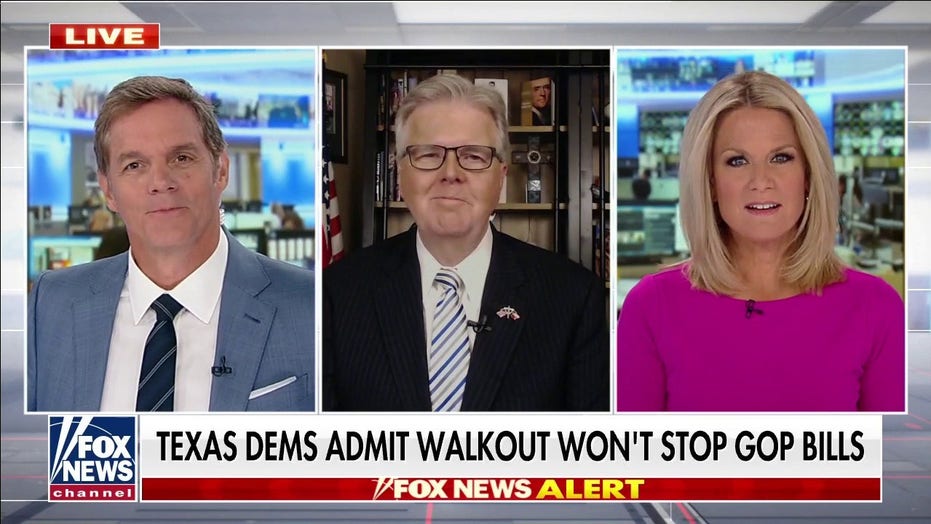 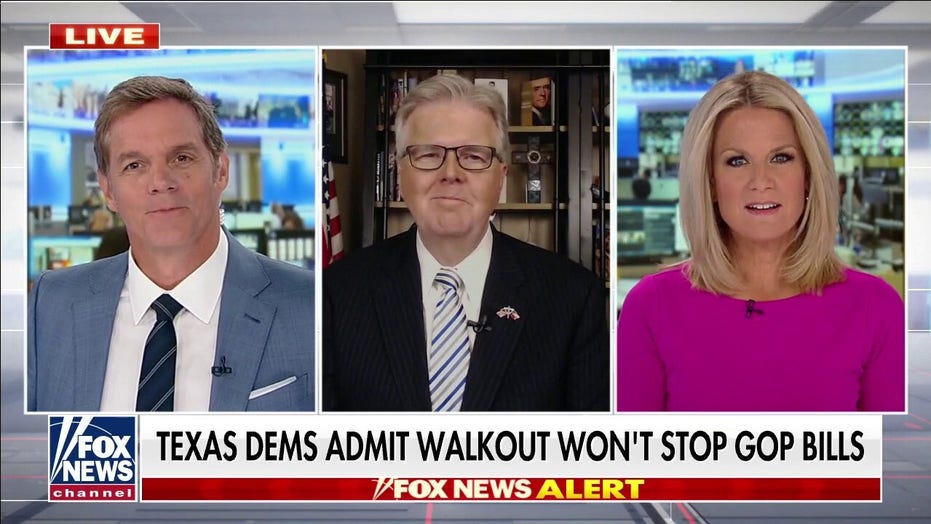 The grounds surrounding the U.S. Capitol had only been open for a few days on Monday. So it was no surprise to see some tourists and locals crossing the East Front of the Capitol, taking in the building and asking a handful of TV news crews who they were staking out.

The answer was U.S. senators en route to a vote.

The answer is that there is no “back” to the Capitol. There are two fronts. One on the West Front stares down the National Mall. The other faces the Library of Congress and Supreme Court.

“Is this where they attacked the building?” asked another passerby.

Yes. But a complete answer is that rioters attacked the entire Capitol on Jan. 6.

And then, a tall man in a linen shirt ambled by.

He looked around. Said hello. And continued on his way.

The man returned a few moments later. Per usual, he asked what the TV news crews were doing there.

And then the man identified himself.

“I’m one of the Texas legislators,” he announced.

The man then dug into his pocket, unearthing his Texas legislator ID badge. Democrat Joe Deshotel of Port Arthur, Texas. 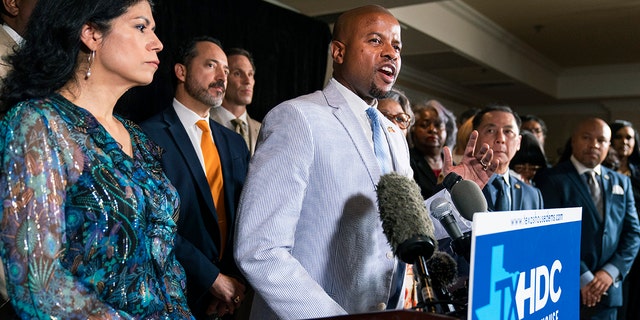 Deshotel is a wanted man – in addition to many other Democrats from the Texas statehouse.

Texas legislators fled the Lone Star State to prevent the legislature from constituting a sufficient quorum to conduct business – let alone pass a new voting law. In a parliamentary version of Texas hold ‘em, the statehouse directed the sergeant-at-arms for the legislature to “send for all absentees whose attendance is not excused for the purpose of securing and maintaining their attendance, under warrant of arrest, if necessary.”

When the legislature issues such an arrest order the Texas Rangers (not the baseball team) and other law enforcement agencies can conceivably go anywhere, deep in the heart of Texas, to apprehend the lawmakers on the lam. But the long arm of the Texas law only reaches to the state line. Those authorities have no power outside of Texas.

So, the Texas Democrats fled to a safe haven: Washington, D.C.

“We have no input,” groused Deshotel about the GOP voting bill. “We are to (Republicans) a warm body to make a quorum. They ask for nothing in our opinions. It’s like just ‘drop dead.’”

Woody Allen famously declared that “90% of success in life is just showing up.” That other 10% must be not showing up to block a legislative assembly from conducting business. Most legislative assemblies, be that the U.S. House and Senate down to town councils require a “quorum” (frequently a majority of all members) to meet. If you can’t meet, you can’t pass bills or laws.

“What if Republicans just left, en masse, in Washington, D.C., so they couldn’t form a quorum in order to move forward in the Senate?” asked Fox News Contributor and former Rep. Jason Chaffetz, R-Utah. “Everybody would be going crazy.” 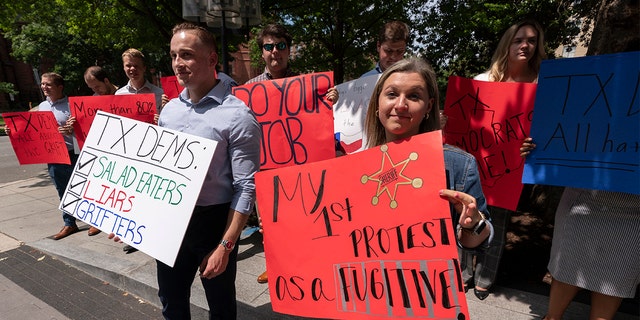 Everything’s bigger in Texas. Except when it comes to political power. That would be Washington, D.C. So the Texas legislators descended on Capitol Hill to meet with Democratic House members and senators. They secured an audience with Vice President Kamala Harris.

“These lawmakers are great, they’re courageous and they’re simply fighting for the rights of every Texan, to have the right to vote,” said Senate Majority Leader Chuck Schumer, D-N.Y.

Everything old is new again.

The decision by the Texas Democrats to bolt from Austin is reminiscent of Texas legislators paralyzing the state legislature in 2003 by secretly stealing away to Oklahoma to block a quorum and avoid arrest. The Texas statehouse was trying to approve a controversial, Congressional redistricting plan. Former House Majority Leader Tom DeLay, R-Texas, helped develop the redistricting maps which would cost Democrats several House seats.

The “cut and run” approach goes back to 1979. Twelve state senators went AWOL for a few days to prevent the state from altering the Texas primary system. Those legislators were known as “The Killer Bees.”

Still, there’s irony in the tactics of Texas Democrats.

By jilting Austin in favor of Washington, the Texas Democrats exploited a loophole in the legislature’s quorum rules to stall the voting bill. Yet, when the lawmakers arrived on Capitol Hill, they implored Democratic U.S. senators to alter their procedures on the filibuster in order to pass a voting bill they support.

Republicans found this to be a little rich – especially after Senate Democrats embraced the campaign by their Texas brethren.

“The Democratic majority in the Senate is concerned about minority rights in the Texas state [legislature],” mused McConnell. “Live long enough and you’ll see anything around here.”

Some Democrats are now demanding a special, filibuster “carve-out,” specifically for voting rights legislation. In other words, senators could still filibuster all other types of legislation. But senators would elevate voting rights bills (or perhaps this particular bill) to an elite, parliamentary pantheon, inoculated from the filibuster threat.

It’s unclear exactly how a voting rights carve-out may work. First of all, the Senate isn’t going to change its filibuster “rules.” That’s too complicated. If they pursued it at all, the Senate would likely establish a new precedent for filibusters and voting legislation.

The Senate’s witnessed two carve-outs pertaining to the filibuster before:

In 2013, then Senate Majority Leader Harry Reid, D-Nev., altered filibuster precedent for administration nominees, except the Supreme Court. McConnell topped that by establishing new filibuster provisions for Supreme Court nominees in 2017 when he was majority leader.

The filibuster “carve out” which remained centered on legislation. In other words, senators of both parties whittled away at the filibuster for everything but good old-fashioned bills.

The pressure is on now for Schumer and Democrats to move.

“As I’ve said before, everything is on the table,” said Schumer when asked about the demands of the Texas Democrats.

During an interview with NPR, Harris suggested she’s working on the filibuster-voting rights issue behind the scenes.

“I’m certainly having conversations with folks,” said Harris. “Obviously it’s going to require all of the Democrats in the Senate to agree with that approach.”

Altering Senate filibuster provisions requires 50 Democrats plus Harris, casting a tie-breaking vote. But some Democrats are leery of establishing a new filibuster precedent on voting rights or anything else.

“So we’re going to continue to press,” said Deshotel about the quest of the Texas legislators. “We thought it timely that we impress upon the White House the need to press harder.”

Little changed, despite this latest pressure campaign. It comes down to the math. And so far, the math doesn’t work to alter the filibuster or advance the voting bill. Everyone in Washington has known that for a while.

In 2003, the Texas legislators eventually relented. They decamped from their temporary outposts in Oklahoma and returned to Austin. The Texas legislature finally secured a quorum and passed DeLay’s redistricting plan for the House.

The outcome on the Texas voting bill may be a fait accompli.

Or, as they would say it in Texas, this ain’t their first rodeo.