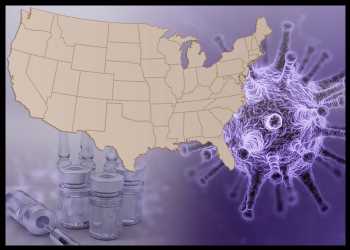 As the world, especially the West, is passing through a relatively lean period of the coronavirus pandemic when compared to the first and second waves, the United States has been ranked as the best place to be in the Covid-19 era.

Since November 2020, Bloomberg’s Covid Resilience Ranking has tracked the best and worst places to be in the pandemic every month, based on 10 measures such as mortality rates, infection counts, freedom of movement and economic growth.

The addition of these criteria has resulted in dramatic changes to the ranks. “The U.S. is now No. 1, with its fast and expansive vaccine rollout, dominated by the highly effective Messenger RNA shots, stemming what was once the world’s worst outbreak,” Bloomberg says.

U.S. replaces countries such as New Zealand and Singapore that topped the ranking consistently by stamping out local transmission of COVID through aggressive lockdown measures.

The United States tops the Bloomberg Covid Resilience Ranking list, consisting of 53 countries, with a Resilience Score of 76.

With more than 50 per cent of its population covered by vaccination, the U.S. currently has 334 vaccinated travel routes.

The United States is followed by New Zealand, Switzerland, Israel and France in the top five bracket.

Four European countries are in the top 10 as they open their borders to vaccinated tourists while hospitalizations fall.

Asian and Latin America countries, including, India, the Philippines and Argentina, are placed among the worst places to be in the pandemic.

“While the failure of powerful, developed economies to curb the spread of the coronavirus remains a lasting legacy of the pandemic and leaves a deep scar — the U.S., U.K. and parts of Europe have some of the highest mortality-per-capita rates in the world — these places are proving faster and better at exiting the Covid era, mostly thanks to domination of vaccine supplies,” Bloomberg says in its latest monthly report.

A fact-sheet released by the White House earlier this month had claimed that due to President Joe Biden’s COVID-19 strategy, “the virus is in retreat”. 300 million shots have been administered in 150 days, COVID-19 cases and deaths have decreased by more than 90 percent, and the economy is experiencing the strongest rebound in decades, it added.

“The progress on vaccinations has brought COVID-19 cases, hospitalizations and deaths down to their lowest levels since the start of the pandemic last year,” according to the White House.

A total of 28,962,849 people have so far recovered from coronavirus infection in the country, which lost 604,115 lives due to the pandemic as of Tuesday.

The coronavirus test positivity rate across the nation has fallen to 2.4 percent.

The Biden administration has announced plans for large celebrations in communities across the United States on Fourth of July to celebrate what it called “independence from the virus.”