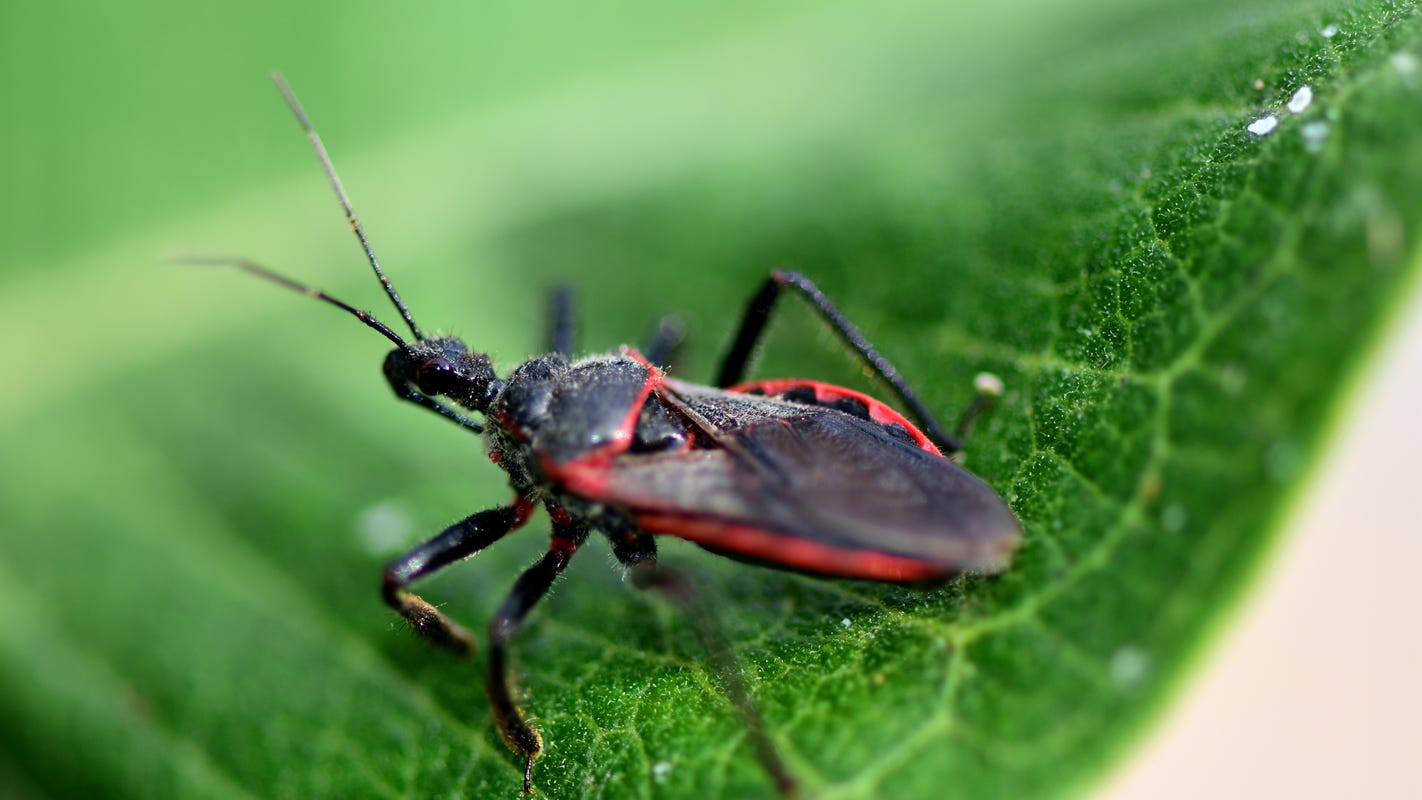 Every summer, health officials warn Americans to be on the lookout for disease-carrying pests such as mosquitoes and ticks. But few people are aware of the kissing bug.

Triatomine bugs, commonly known as kissing bugs, are vectors for a dangerous parasite that can cause a debilitating illness in humans called Chagas disease. If left untreated, theinfectious disease can become lifelong and painful, and in some cases lead to death.

The key is early treatment, but many Americans living with the disease are unaware they have it, and a recent study suggests doctors are underdiagnosing it.

“It’s such a neglected disease,” said Melissa Nolan, assistant professor at the University of South Carolina and lead author of the study published this week in Emerging Infectious Diseases, a peer-reviewed journal by the Centers for Disease Control and Prevention.

But health experts say the disease is not only difficult to diagnose – sometimes requiring multiple tests – it may require CDC intervention to treat.

“Chagas is not something that most doctors think about in the U.S.,” said Dr. Wesley Long, medical director of microbiology at Houston Methodist Hospital. Doctors are taught, “when you hear hoofbeats, think of horses, not zebras. Chagas is a zebra.”

What is Chagas disease and how can you get it from a kissing bug?

Chagas disease is caused by a parasite called Trypanosoma cruzi. The kissing bug can pick up this parasite when feeding on the blood of an infected animal.

Kissing bugs are commonly found in South and Central America, and Mexico, but doctors are starting to count cases in states like Texas, Arizona, Arkansas, Louisiana, Mississippi, Tennessee, Utah and California, according to a Texas A&M University program studying Chagas disease.

The rate of kissing bugs infected by the parasite is abnormally high compared with other insects that carry disease, said Gabriel Hamer, associate professor in the department of entomology at Texas A&M. Up to 60% of kissing bugs carry the parasite that causes Chagas, compared with only 0.1% of mosquitos that carry dengue, an infectious disease occurring in tropical areas.

Although more than half of kissing bugs carry the disease-causing parasite, Hamer said it’s still difficult for a person to be infected. Unlike mosquitoes or ticks, the parasite isn’t transmitted through saliva or blood during feeding. Instead, it’s transmitted through the bug’s feces.

The kissing bug usually feeds around a person’s face when the person is sleeping, which is how the insect got its name. After feeding, the bug defecates near the wound. People normally become infected when they rub that fecal matter into the wound or near the eye. 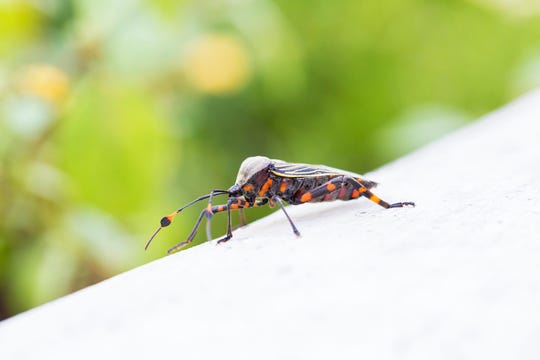 “It’s a very inefficient form of transmission for humans,” Hamer said. “There’s been studies that suggest that if you have a positive kissing bug feeding on a human, it could take up to 2,000 feeding events for that human to become positive.”

If kissing bugs establish a colony in the house, they feed on a person multiple times, increasing the chance of transmitting the parasite, he said. Kissing bugs are most active when they venture out in search of a meal or a mate, which can start start as early as April and end as late as October, depending the region.

There are two phases of Chagas disease: acute and chronic. During the acute phase, a person may have no symptoms or mild ones, such as fever, fatigue, body aches, headache, rash, loss of appetite, diarrhea and vomiting, according to the CDC.

A swollen eyelid, known as Romaña’s sign, may also be a signof acute Chagas. This typically occurs when the parasite infects the eyelid after rubbing bug feces into the eye.

Chronic Chagas can last for life. In those cases, the parasite invades the heart tissues, causing an enlarged heart, heart failure, an altered heart rate or cardiac arrest. It also can cause gastrointestinal complications including an enlarged esophagus or colon and lead to difficulties with GI functions.

The CDC estimates more than 300,000 people in the U.S. live with Chagas disease. One in 3 people develop the chronic stage of the disease, which can lead to heart attack, stroke or sudden death.

Doctors may be underdiagnosing Chagas disease

Patients can recover with early detection and treatment, but if left untreated, the infection can become a lifelong, painful and deadly disease. The problem is, most people infected in the U.S. don’t know they have Chagas disease, and this week’s study suggests doctors may be partly to blame for missing diagnoses.

From August 2015 to July 2017, researchers looked at 97 patients with a heart condition called nonischemic cardiomyopathy in a Houston hospital. All came from a country or lived in an area where kissing bugs are found, putting them at risk for Chagas disease, yet doctors never tested them.

Overall, 7% of those patients seeking treatment for heart failure management tested positive for the Chagas disease parasite by the CDC, according to the report.

“Clinicians should be better informed about Chagas as a potential underlying factor – even in the absence of non-ischemic cardiomyopathy, which occurs years even decades after infection,” said Kacy Ernst, professor and program director of epidemiology at the University of Arizona’s College of Public Health, who is unaffiliated with the study.

More than 85% of patients came from Latina America, where the CDC estimates as many as 8 million people may have Chagas disease. Nolan,the study author, said doctors should have “automatically been thinking of Chagas disease in these patients” when they arrived to the hospital.

“Physicians aren’t even thinking about (Chagas) with someone who’s from the classic endemic environment,” she said, “so how are they going to think about people who are born and raised in the United States?”

Ernst said it’s important for patients to be aware of the risk factors associated with Chagas disease and advocate for their own screening.

“The fact that only two of the positive cases (in the study) had heard of Chagas and only one understood the transmission indicates that patients themselves may not have enough knowledge about the risk to advocate screening,” she said. “Empowering both individuals and clinicians with knowledge is important.”

Why it may be difficult to diagnose and treat Chagas disease

While it’s important to consider and screen for Chagas disease, health experts say diagnosing and treating a patient is easier said than done.

During the acute phase, which lasts eight to 10 weeks after infection, a diagnosis of Chagas disease can be made by looking for parasites in a blood smear under a microscope. The CDC accepts and tests samples to help confirm results.

However, many patients who go to the hospital are past the acute stage and may already have entered the chronic stage. At this point, doctors test for antibodies. Long, of Houston Methodist, says suchtesting can be unreliable, producing false positives or false negatives.

“A drawback of serological tests is that you’re looking for antibodies that react against the parasite, but you may have antibodies that aren’t due to the infection but still react with the test – giving you a false positive,” he said.

Every test has a false positive rate, he said. If doctors tested every patient with symptoms of acute Chagas, they would spend more work verifying those false positives than finding an actual diagnosis.

Mosquitos and ticks and wasps, oh my!: How to stay safe from 5 common but dangerous bugs this summer

Cicadas action figures and monsters?: People get creative with art inspired by the periodical insects.

Long says doctors may have to order multiple tests to the confirm a diagnosis, and in some instances, send resultsto the CDC for confirmation.

Benznidazole was approved by the Food and Drug Administration in 2017 as the first drug to treat Chagas disease. It was approved for use in children 2 to 12 years of age, but Long says doctors may use it off-label for adult patients.

In 2020, nifurtimox, under the brand name Lampit, was the second drug approved by the FDA for treatment of Chagas disease in patients under 18 years old.

Since the two drugs were approved after the recent study was conducted, Long said it may have been harder for doctors to prescribe them without CDC intervention.

Doctors should inquire about a patient’s history before screening and testing for Chagas disease, health experts say. Has the person lived in South or Central America, or Mexico? Did they live in housing conditions where a kissing bug is most likely to appear? Have any of their family members had Chagas disease?

“It’s important for doctors to think about Chagas disease in the right patients,” Long said. “It is something that doctors in America need to be thinking about” before cardiac symptoms appear and become severe.

“You could be doing the patient a huge service.”