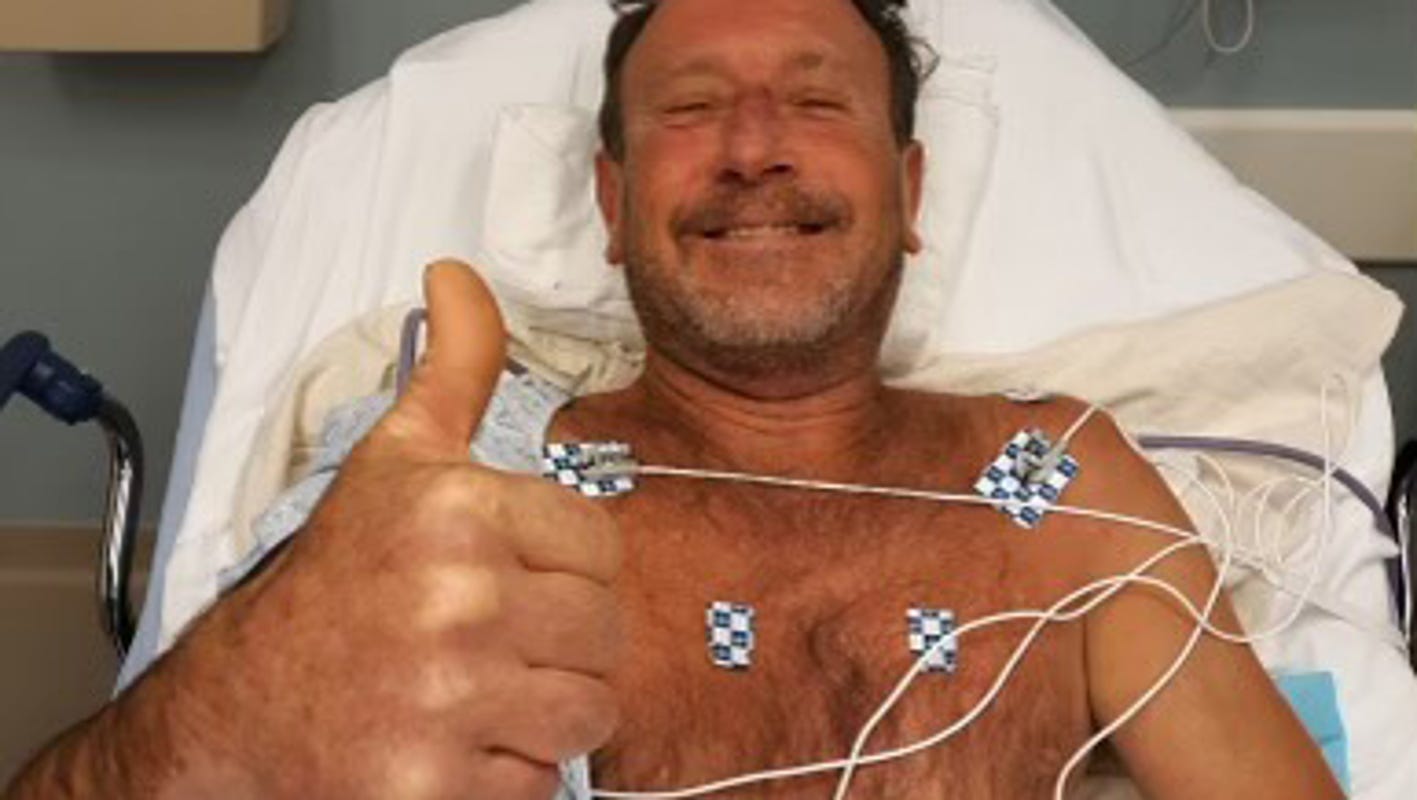 PROVINCETOWN, Mass. — In what is an exceedingly rare incident, a commercial lobster diver was seriously injured Friday morning when he was caught in the mouth of a humpback whale feeding near a beach, his sister said.

Michael Packard, 56, is at Cape Cod Hospital with at least one broken leg, Cynthia Packard said.

“He was swallowed by the whale, he was in his mouth for about 20 seconds,” Cynthia Packard said in a phone interview Friday morning.

Packard spoke with crewman Josiah Mayo, who relayed some of the details to her. Packard said the whale burst to the surface, and Mayo thought it may have been a great white shark.

Michael Packard, 56, of Wellfleet, gives the thumbs up Friday morning from Cape Cod Hospital in Hyannis, where he was taken after he was injured in an encounter with a humpback whale while diving for lobsters. (Photo: Courtesy of Packard family)

“There was all this action at the top of the water,” Packard said Mayo told her. Then the whale released her brother.

Dangerous waters: Florida man once bitten by alligator is chomped by 8-foot shark while on vacation

The call came in a little before 8 a.m. ET that a diver had suffered serious injuries to the legs after interacting with a whale. Provincetown Fire Chief Michael Trovato said he did not go to the call but confirmed that he heard that the diver had been injured by a whale.

What do lobster drivers do?

Commercial lobster divers are a tough breed. In Provincetown, Massachusetts, they brave the cold waters to grab migrating lobsters off a sandy shelf when they emerge from an adjacent deep channel and pause to acclimate to the somewhat warmer water.

A crewman topside follows the bubbles of the diver below as he or she drifts with the strong current. It’s a spot that is fraught with danger, and commercial lobster divers have seen more than their share of close calls and tragedy.

“Thank god, it wasn’t a white shark. He sees them all the time out there,” Packard said. “He must have thought he was done.”

Charles “Stormy” Mayo, a senior scientist and whale expert at the Center for Coastal Studies in Provincetown, said this is exceedingly rare. Humpbacks are not aggressive animals, and he said he feels this was likely an accidental encounter while the whale was feeding on fish, likely sand lance.

“People direct dive on them (humpbacks) in the tropics, not here. In those places I’m not aware of a single incident of people having problems with them,” Stormy Mayo said.

“Michael (Packard) is a smart guy and an exceptional diver,” said Stormy Mayo. “For that to happen to him, you can be sure he did everything he was supposed to do.”