CNN’s Brian Stelter getting panned for interview with Jen Psaki, the New York Times being criticized for ‘biased’ tweet against Joe Manchin, and Peter Daszak getting cited by media fact-checkers and Facebook round out today’s top media headlines.

“I’m not using hyperbole when I say the ‘interview’ that @brianstelter did with Jen Psaki yesterday should be studied in journalism school. It’s one of the most sycophantic interviews of a state official you’ll ever see. This is how state TV functions,” Greenwald wrote to accompany video of the CNN host seeking advice from the Biden flack.

Greenwald mocked various clips of the interview, even writing “Have I been a bad boy, Jen? I want to be a good boy,” in response to Stelter asking the press secretary what the media gets wrong when covering the Biden administration.

Stelter asked Psaki, who was a colleague of Stelter as a CNN commentator during the Trump era, if she fears Republicans will ruin the country before their children grow up, which Greenwald felt was so over-the-top that the CNN host could have made his guest uncomfortable.

“Somehow Brian Stelter managed to take his humiliatingly ‘tell-me-why-I’m-bad-Jen’ start to his interview and get even more sycophantic from there. Even Psaki had to be thinking: ‘oh my god, the intensity of his adoration is…. uncomfortable,’” Greenwald wrote. 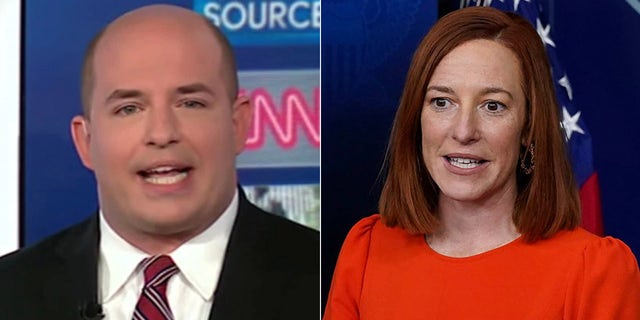 Other questions included, “Five months in, do you feel like that you’ve made any progress with … defeating the lies?” The hardest-hitting question Stelter asked Psaki was why President Biden hasn’t held more than one solo press conference, which Psaki did not directly answer, saying he “takes questions several times a week.”

Psaki’s appearance on the ratings-challenged “Reliable Sources” was criticized from both sides of the aisle. Stelter took to Twitter to vent about the backlash.

“My Twitter mentions right now: liberals mad because I asked @PressSec about why Biden won’t hold more press conferences. Conservatives enraged because I asked her ‘what do you think we get wrong?’ And I feel so old fashioned thinking to myself, ‘judge the interview in context,’” Stelter tweeted.

Far-left media watchdog Oliver Willis responded, “Both sides are mad at me so I must be doing something right is a classic dodge.”

“[It] pretty much sums up CNN coverage of politics,” Jacobson told Fox News. “Given CNN’s collapsing viewership, perhaps it’s time for CNN to move on to holding the current administration accountable.”

Psaki is one of many members of the mainstream media who ditched the Fourth Estate to work for the Biden administration. She left CNN to become a senior adviser for the Biden-Harris transition team and was eventually named press secretary.