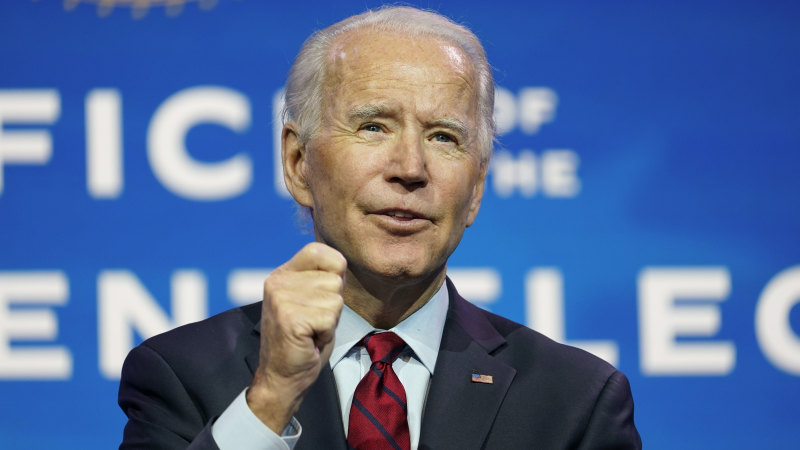 A sprawling $US250 billion ($324 billion)-plus suite of legislation aimed squarely at enhancing America’s ability to compete with China, along with a grab bag of other anti-China measures, is winding its way through the US Congress.

The bill, which started life as a $US100 billion, 150-page proposal labelled the “Endless Frontier Act” has grown to more than 2000 pages and been re-labelled the “United States Innovation and Competition Act” as at least six different proposals targeting China have been combined in negotiations in the US Senate. 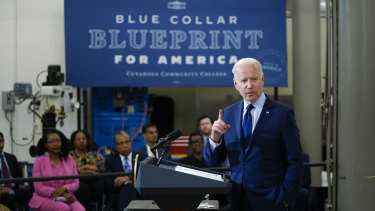 The bill would represent a quite dramatic escalation of US efforts to improve its competitiveness against China.Credit:AP

The senators keep adding new sections targeting everything from crackdowns on international technology transfers to advocating a diplomatic boycott of the 2022 Beijing Winter Olympics.

A Senate vote on the bill was postponed last Friday as mainly Republicans continued to advocate for more amendments but is likely to occur once Congress resumes after its Memorial Day break in a week or so.

At the core of the legislation is spending designed to provide incentives for domestic semi-conductor manufacturing and research and development in strategic sectors like artificial intelligence, 5G wireless, quantum computing, biotechnology and robotics – industries that China has identified as central to its plans for global technology leadership and into which it is pouring state funds.

The original ambition has, however, grown into a far broader response to China’s challenge to US hegemony.

It includes a reorientation of foreign affairs-related spending and diplomacy to the Indo-Pacific and funds to counter China’s influence globally.

It calls for Taiwan’s inclusion in international bodies; requires an unclassified report on the origins of the coronavirus; opposes international development banks’ assistance to China; provides funding to counter “predatory bi-lateral lending” (read China’s “Belt and Road” program) and would impose more sanctions on China for its treatment of the Uighurs in Xinjiang.

There’s also proposed sanctions against those engaged in cyber attacks against the US, with particular reference to China, and “transparency requirements ” and the threat of withdrawal of funding from colleges that have Confucius Institute partnerships with Chinese colleges and universities.

Along with the $US360 billion of the continuing Trump administration’s tariffs on China’s exports to the US, which the Biden administration appears in no hurry to revisit, the bill would represent a quite dramatic escalation of US efforts to improve its competitiveness against China.

It’s also another very expensive program within an unprecedented spending splurge by the new administration, which unveiled a proposed $US6 trillion budget last week.

The bill has a core of bipartisan support in the Senate, albeit that new proposals – like another measure that focuses on the trade imbalance with China – keep being added.

It might face tougher hurdles in the House but the legislation reflects a bipartisan hostility towards China and a determination to protect and improve America’s position in the key economic battlegrounds of the 21st century while trying to suppress China’s efforts to challenge it.

It also reflects the experience of the pandemic, which exposed economic vulnerabilities, and not just in America, to global supply chains and the global over-reliance on semi-conductor manufacturers in Taiwan and South Korea in particular.

While there has been some pushback from US businesses to some of the proposed measures – particularly one that would crack down on technology transfers – and some conservatives oppose the extent of the central direction in the bill and the creation of new bureaucracies to manage the programs, the congressional quibbles are over detail rather than direction. 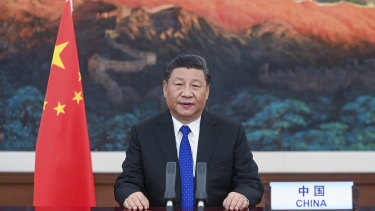 Xi Jinping’s China is feeling pressure from the United States and Europe.Credit:AP

The bill, if enacted, would overlay the pre-existing trade war between the US and China.

While the new US Trade Representative Katherine Tai and China’s vice premier Liu He have had an initial conversation in which the Trump tariffs and the current “truce” were discussed, there is no suggestion the Biden administration will lift the tariffs or the requirement under the truce agreement that China increase its purchases of US products by $US200 billion in 2020 and 2021.

Even though its imports from the US have been growing, China’s has met only about 60 per cent of its commitments under the truce and its trade surplus with the US has been blowing out as the US economy bounces back from last year’s pandemic-induced depths.

The legislation reflects a bipartisan hostility towards China and a determination to protect and improve America’s position in the key economic battlegrounds of the 21st Century while trying to suppress China’s efforts to challenge it.

The US isn’t the only front where China’s ambitions are being resisted.

The European Union has followed up its freezing of a trade pact it tentatively signed with China very late last year (after China sanctioned some EU officials in response to the EU’s own sanctions on Chinese individuals over human rights abuses in Xinjiang and Hong Kong) with a leaf from the Trump administration’s trade war manual.

It is drafting legislation that would penalise imports and investment from industries overseas that receive subsidies.

While the measures could apply to any country, the biggest exporter to Europe – and the economy where state subsidies are central to its economic plans and international ambitions – is China.

Along with penalties for subsidised imports, there would be restrictions on the ability of companies that receive subsidies investing in EU companies and, as is occurring around the globe, efforts to reduce the EY’s dependence on international supply chains for strategic products.

Those include healthcare products, energy, raw materials and others related to Europe’s response to climate change. It is estimated (by the EU) that China supplies about half the products where the EU has plans to increase its self-sufficiency. 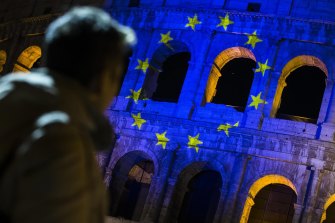 The European Union has followed up its freezing of a trade pact it tentatively signed with China very late last year with a leaf from the Trump administration’s trade war manual.Credit:EPA

The abrupt change in the EU’s attitude towards China – from embracing an investment agreement in the dying days of the Trump administration to freezing it – may relate to China’s sanctioning of EU officials but it also owes something to the thawing of relations between the EU and the US under Biden.

Biden has made restoring US relations with its key post-war partners and allies – relations badly damaged during the Trump years – a priority.

The US and the EU have been holding talks that could see the US lift tariffs on European steel and aluminium exports imposed by Trump in 2018 on “national security” grounds, which provoked retaliatory tariffs from the EU.

Further EU tariffs on US exports were planned but have been suspended pending the outcome of the talks, which are occurring against a backdrop of much warmer relations between the US and Europe.

Thus the two major Western economic blocs are adopting measures that are likely to adversely impact China’s ability to fulfil its aspirations, albeit that the EU’s actions are nowhere near as overt or as overtly hostile as America’s.

China poked the bear with the transparency and scale of its ambition of toppling the US’s global technological and economic leadership and by detailing the central role the state would play in achieving it.

It’s now seeing the response which, in the US, is broad and aggressive and which now seems to be gathering some support elsewhere.

Start the day with major stories, exclusive coverage and expert opinion from our leading business journalists delivered to your inbox. Sign up here.