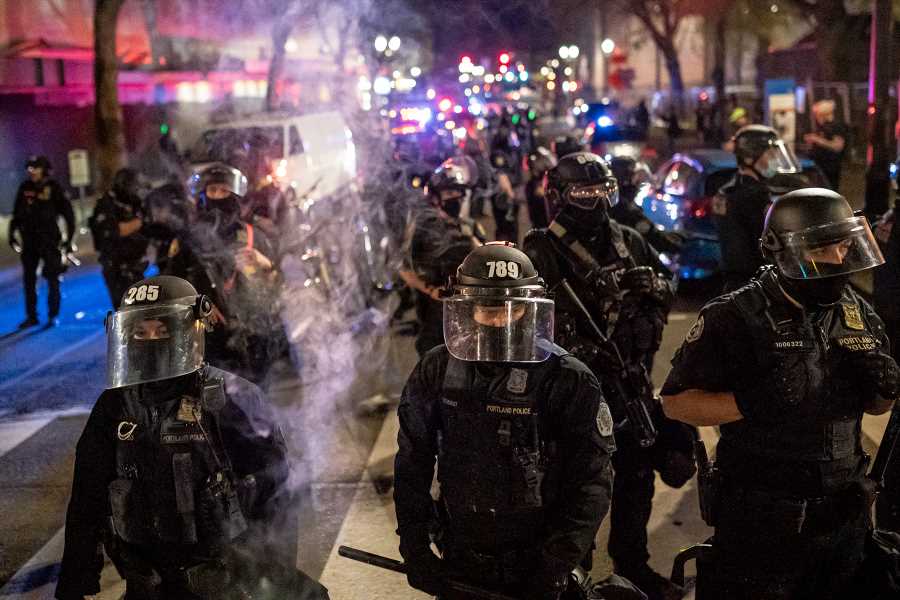 PORTLAND — The Department of Justice has delivered a striking rebuke of the Portland Police Bureau for its brutal policing of last year’s racial justice protests, calling out the police for violations of bureau policy and the U.S. constitution, while criticizing a leadership structure that “lacks critical self-assessment” and broadly views “all force as justified.”

In the aftermath of the George Floyd murderer by Minneapolis policeman Derek Chauvin last May, Portland erupted in a months-long streak of nightly protest demanding racial justice and police accountability. (Portland protests also made national news after President Trump deployed federal officers, who clashed with protesters and swept suspects off the streets in unmarked vans.) The city’s activists recently got a shout out from Floyds’ younger brother Rodney after Chauvin was found guilty. “I’d like to thank the people that stayed in the streets marching night and day — the people of Portland stayed in the streets for 83 days,” he said, “making a statement with us, encouraging us on our dark days.”

In real time, the protests against police violence were met with brutality from the Portland Police Bureau, whose commissioner is also the city’s mayor, Ted Wheeler. The Police used force against protesters more than 6,000 times, ranging from firing less-than-lethal munitions, to launching tear gas, to individual beatings delivered with batons. (Rolling Stone explored the contradiction of this progressive city’s violent cops in a dispatch last summer.)

PPB has been under federal supervision since 2012 — under an agreement to settle DOJ findings that PPB engaged “in a pattern or practice of unnecessary or unreasonable force,” particularly against people experiencing mental illness. In February, in response to the policing of protests, DOJ found that PPB had again fallen out of compliance with its obligations.

The new letter from DOJ is dated May 5th and was published by The Oregonian. It is the federal government’s response to a PPB self-assessment of its work policing the nightly protests. In that assessment, the police appeared not to understand the public anger directed at the bureau, blaming the protests on shiftless youth, writing: “many younger people, lacking entertainment and work, often attended the protests, with some gathering regularly to socialize and drink and a portion of those then engaging in criminal activity.” Independent contractors, hired by the city to offer oversight, had earlier slammed PPB’s assessment as “tone deaf.“

In its letter the DOJ is scathing, calling the PPB self-assessment “an advocacy piece to justify what PPB did, blame shortcomings on other entities and circumstances beyond PPB’s control, and seek additional funds for new equipment, training, and personnel.” It notes, acidly, that the PPB report was “not sufficiently comprehensive” and “lacks critical self-assessment.” The letter mocks the bureau for having written: “The Portland Police Bureau… did an excellent job handling the nightly protest.” (Emphasis added by the DOJ.)

The Department of Justice found much to criticize in PPB’s “abnormally high” use of force. And it calls out PPB leadership for its inability or unwillingness to impose restraint, writing, “PPB command broadly portrays all force as justified.”

The DOJ hits PPB for practices it describes as unconstitutional and violations of PPB policy. In particular, it denounces the bureau’s failures to deliver individualized warnings before resorting to violence, writing that “PPB policy and the Constitution require adequate justification and feasible warnings for each use of force.” The Portland police routinely use an LRAD (Long Range Acoustical Device) truck to make blanket demands that protesters disperse under the threat of violence. “PPB incorrectly suggests that a sound truck provided all necessary warnings for PPB members to use force against individuals,” DOJ writes. “PPB’s reliance on a blanket announcement…is inconsistent with established requirements,” it continues, adding that a federal review of protest footage “suggests that direct warnings to individuals immediately prior to an officer’s use of force could have been feasible in many situations.”

In practice PPB, will often declare a riot and then bull-rush protest crowds, throwing slow-moving individuals to the ground and sometimes clubbing them. DOJ writes that “PPB policy requires that officers attempt to de-escalate to avoid employing force” and that “PPB’s policy requirements are not suspended by a riot declaration.” It also criticizes the police bureau for a “pattern of misusing the phrase ‘active aggression’ to justify force against individuals who engaged in passive resistance or merely failed to disperse.”

Portland Police Chief Chuck Lovell did not respond to a request for comment. Civilian oversight of the bureau rests with Wheeler, who also did not respond to questions from Rolling Stone. In his tenure, Wheeler has shown little appetite for clashing with the police; indeed, his top adviser on public safety is a former PPB commander, who used to lead the local police union.

Public anger at the police bureau runs deep. Racial disparities in arrests in Portland are the fifth worst in the nation. This year the city paid out a $2 million settlement to the family of Quanice Hayes, a Black teenager who was killed while on his knees in 2017 by a PPB officer with an AR-15. Last month, the police killed a man experiencing homelessness, Robert Delgado, who appeared to be in mental distress. As seen in video of the incident, the officer shot Delgado with an AR-15 from long distance while taking cover behind a large tree trunk. (The shooting is under state and county investigation.)

Mum on the police shooting, Wheeler has instead used his platform to call for vigilantes to help the city counter vandalism by protesters, the most extreme of whom have smashed storefront windows and damaged buildings. “These self described anarchists want to burn, they want to bash,” Wheeler said on April 23rd. “These people often show up in cars. And they’re all dressed in all black.” Wheeler asked the public to “unmask” protesters by taking pictures of them or their license plates. “Let’s make it hurt them a little bit,” he added.

Portland has a dark history of right-wing violence, and Wheeler’s comments were condemned by civil rights groups as endangering city residents. The city has since seen multiple incidents where groups of protesters have been struck by cars. On Thursday, a driver of a pickup truck pulled a gun on protesters before being tackled to the ground. Wheeler, who is facing a recall campaign, did not answer questions about whether this violence had prompted any critical self-assessment of his call to “make this stand and take our city back.”