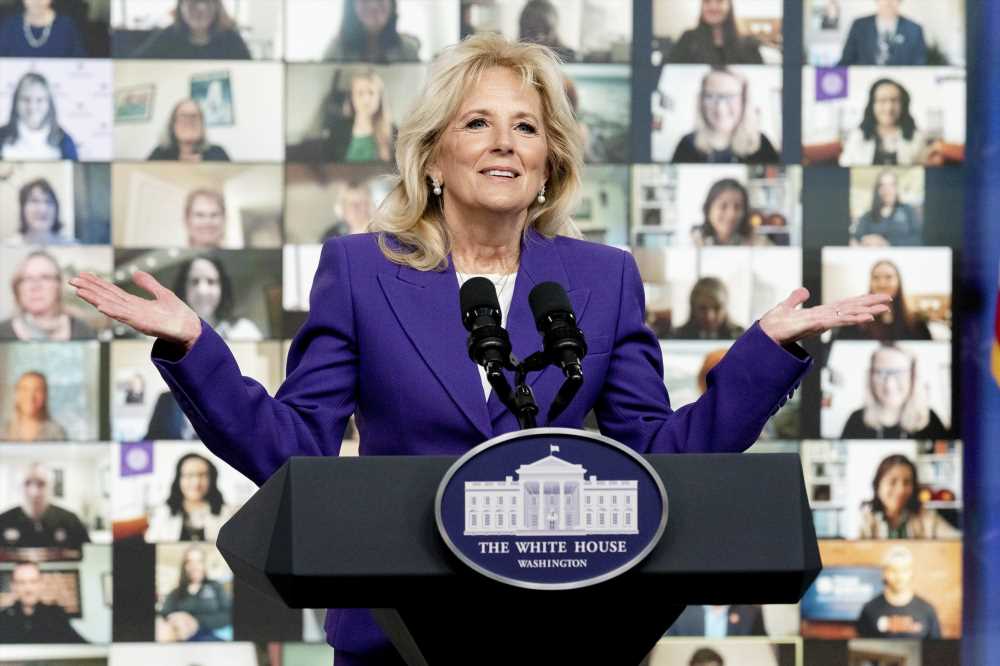 First Lady Dr. Jill Biden is expanding her Obama-era work with military families — a cause close to her heart.

On Wednesday, she met virtually with U.S. military family members who tuned in from around the world as she revealed the next phase of her "Joining Forces" initiative

The first lady noted her own military ties: Her father was a Navy Signalman in World War II and went to college on the GI Bill, and her son Beau served with the Delaware Army National Guard.

"When Beau served for a year in Iraq, I saw how his children navigated his deployment," she said, according to reporters in attendance.

"I often wondered how people so small could be so strong," she continued. "Without a doubt, being a part of this military community has shaped who I am."

Biden spoke from the Eisenhower Executive Office Building in front of three giant screens with a grid of more than 100 military family members. She spoke with Ryzun Hazen, a senior at Ramstein High School in Germany. He discussed life as a military kid, before introducing the first lady. She thanked him for sharing his experience, adding, "It's that resilience a heart that makes military kids like you so special." She described Hazen as "open and funny and sincere" as she recalled meeting him earlier this year with President Joe Biden.

Dr. Biden also recounted christening the USS Gabrielle Giffords in June 2015, as she compared the military to a ship. "And yet, so much of its power is unseen beneath the waves: the engines, the anchor, the rudders that give it direction and purpose," she said.

"The families of our service members and veterans; the caregivers who lift up our wounded, ill, and injured; and the survivors who grieve those we've lost — you may not wear a uniform," she continued. "But you serve and you sacrifice for us all. Military families are as critical to our national defense as a rudder is to a ship. And we must always act upon that truth."

She went on to reveal the next phase of "Joining Forces," the initiative she started 10 years ago with then-First Lady Michelle Obama.

After reviving the initiative in January when she returned to the White House, Dr. Biden is continuing to focus the program's efforts on employment, education and health for military and veteran families, caregivers and survivors.

"We have an all-volunteer force — and it continues only because generations of Americans see the honor, dignity, and patriotism of this calling," Dr. Biden said. "How can we hope to keep our military strong if we don't give our families, survivors and caregivers what they need to thrive? If we don't act on our sacred obligation?"

She noted that the military spouse unemployment rate before the COVID-19 pandemic was around 22 percent, according to the Department of Defense. "Spouses — all of you — deserve opportunities to do the work you love, whether that means keeping your job when you move from base to base or owning your own business," she said.

She went on to advocate for quality childcare for working military spouses, adding that there are more than 2 million kids whose parents are service members, National Guard, reservists or veterans.

"Our schools want to support all students, but they don't always know how to do so," the first lady said. "We're going to work with educators and our government partners to make sure you, our military-connected kids, have what you need to succeed." "Just 1 percent of our country has shouldered the burden of 20 years of war," she continued, underlining the need for health and wellness. "No one has more strength, grit and resilience than our military families, but you can't do this alone. We have to help you carry this weight — by improving access to mental health resources, ensuring everyone can put food on the table and supporting caregiving families and our survivors."

She was briefed by health and wellness consultants after sitting in on a call.

The first lady has partnered with the Departments of Defense, Labor and Education on expanding "Joining Forces."

"And this is just the beginning," she said Wednesday. "Our effort will take all of our government working together, and we expect every agency to step up and be a part of it."