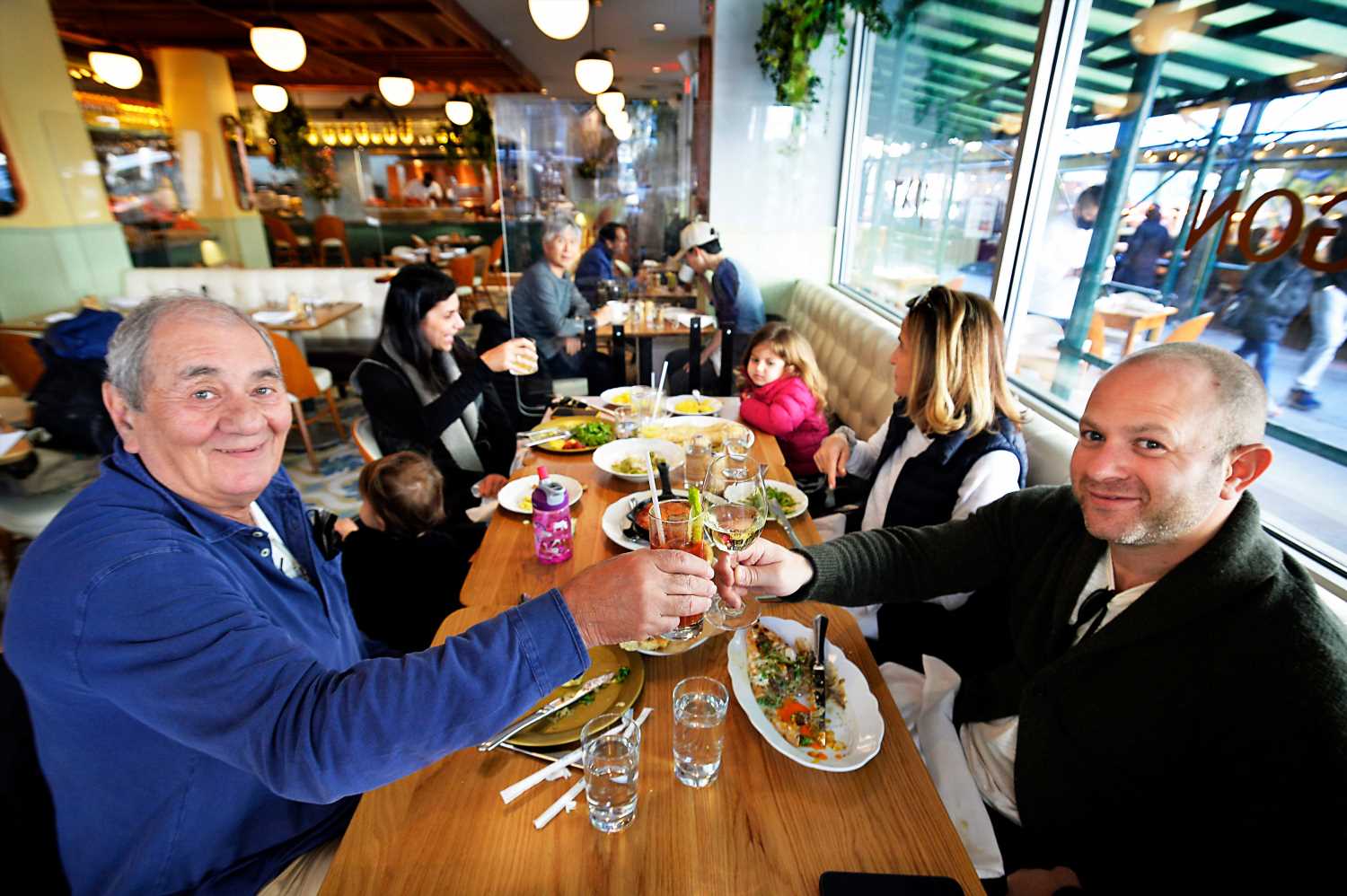 More than a year after the coronavirus lockdowns slammed the Big Apple, life appears to be returning to parts of Manhattan, which is helping the island’s struggling restaurant industry bounce back.

While areas dominated by office towers continue to struggle, people are returning in droves to residential areas like the Upper West and Upper East sides, real-estate sources said. And that’s boosting business for area restaurants.

“Business is coming back in all neighborhoods,” said Simon Oren, a restaurateur with 15 eateries across Manhattan, including in the Flatiron District, on the Upper West and Upper East sides and in Hell’s Kitchen. “It is nicer out, so people are getting out more and sitting outside. And now there is 50 percent indoor-dining capacity, which is a fantastic boost.”

“That combined with nicer weather is helping every neighborhood — although we are very far from our 2019 numbers,” he said.

While Oren is seeing a boost across the board, he acknowledges that the biggest rebounds have been at his restaurants on the Upper West and Upper East sides, which emptied out last summer as well-off residents fled to the Hamptons and the city’s suburbs.

But now people are flocking to those areas. The Upper West Side saw 655 real-estate contracts signed between January 2021 and March 2021 — a 62.94 percent jump in over the same time last year, according to John Walkup, co-founder of real-estate data firm UrbanDigs.

Ditto for the Upper East Side, which saw a 54.65 percent jump in real-estate contracts to 757.

Downtown Manhattan, by contrast, has seen only 757 new contracts signed, up 52 percent from last year, despite encompassing multiple neighborhoods, including resident-friendly Tribeca and Greenwich Village.

The boom in residents tracks with a boom in restaurants for select neighborhoods. At least a couple dozen new eateries have either recently opened or are slated to open in the coming months on the Upper West Side, including Oren’s Dagon, an Israeli restaurant at West 90th Street and Broadway dubbed the city’s best pandemic opening by The Post’s Steve Cuozzo.

While Dagon has been in the works since before the pandemic took a knife to the economy, other restaurateurs have been lured to new opportunities by cheap rents.

For example, Leticia Skai Young-Mohan of LoLo’s Seafood Shack in Harlem and her husband, executive chef Raymond Mohan, have signed a lease to take over the former Cascabel Taqueria space at 2799 Broadway near Columbia University, also on the Upper West Side.

“There are now a ton of restaurants on the market,” Young-Mohan said. “Raymond saw this sign ‘restaurant for rent’ while he was on his bike, and that’s how we found it.”

“You can actually get cheaper rents on the Upper West Side than in Harlem now,” she said.

The restaurant-owner couple are planning to open a 1,500-square-foot LoLo’s Taco Shack there, inspired by their travels to the Yucatan and Leticia’s family roots in Belize. They hope to open on June 19, which holds significance as Juneteenth, a holiday commemorating the emancipation of slaves in the United States.

Other new restaurants in the area known for its town houses and proximity to Central Park include omakase spots Kissaki and Sushi Nonaka, as well as Blue Marble Ice Cream from Brooklyn, and Le Pecora Bianca, which taking over the spot where Isabella’s used to be.

There’s also Izzy’s BBQ Smokehouse, a kosher barbecue spot from Brooklyn; and Noi Due Cafe, which offers kosher Italian food; as well as Joe’s Steam Rice Roll, which has spots in Flushing, Chinatown and on St. Mark’s Place; and Mimi Cheng’s Dumplings, from the East Village.

SA Hospitality Group, which operates the popular Italian restaurant and wine bar chain Felice, is also planning to open on the Upper West Side at 240 Columbus Avenue, in a 4,000-square-foot space previously occupied by Oxbow Tavern, which closed down last June.

The restaurant is slated to open next summer.

“We have always looked for the perfect location for a Felice on the Upper West Side,” SA partner Jacopo Giustiniani said, noting that the pandemic provided a perfect opportunity. “The Upper West Side is an iconic neighborhood, and we hope this opening will help in its recovery.”