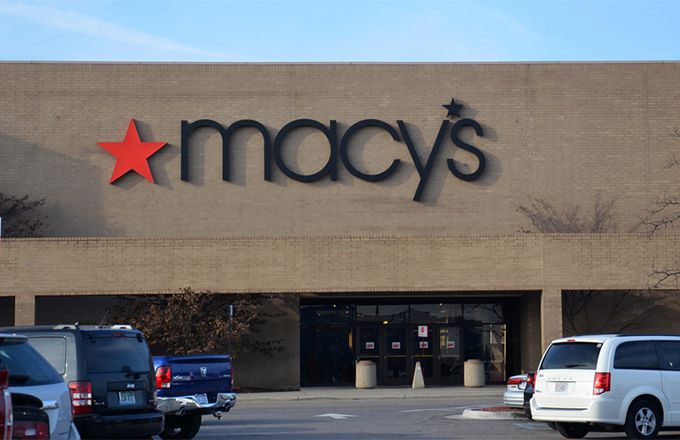 Traders have pushed the share prices for Macy's, Inc. (M) around dramatically surrounding the GameStop Corp. (GME) phenomenon. However, over the past month traders have held Macy's stock in a tight range ahead of its quarterly earnings announcement. Despite this, option traders have paid a premium expecting the stock to rise. It seems to imply that they are expecting very good news.

There's no way to accurately predict the direction a stock will move after an earnings announcement. However, a comparison of the price action between stock prices and option prices shows that if Macy's shares jump, diverging away from the 20-day moving average in the first few days after the announcement, uptrend-focused traders are in a position to capture the best profits.

Option trading represents the activities of investors who want to protect their positions or speculators who want to profit from correctly forecasting unexpected moves in an underlying stock or index. That means option trading is literally a bet on market probabilities. By comparing the details of both stock and option price behavior, chart watchers can gain valuable insight, although it helps to understand the context in which this price behavior took place. The chart below depicts the price action for Macy's share price and the setup leading into the earnings report. 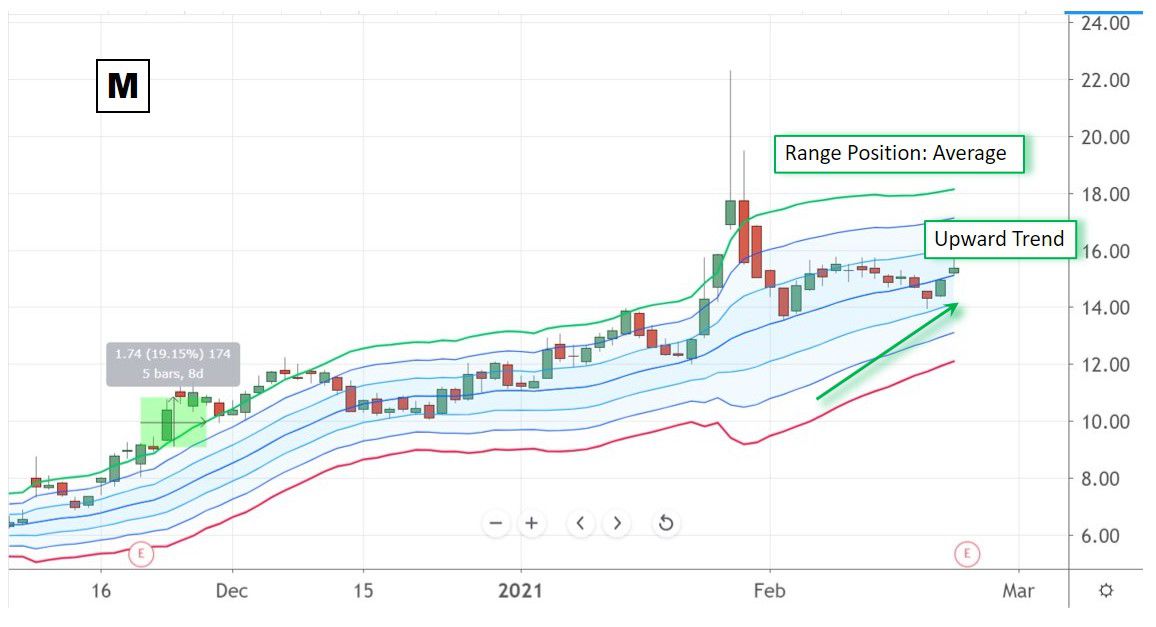 The one-month trend of the stock has the shares pushing above its extreme range before moving back to its average. It is notable that over the past month Macy's rose to over $17 per share at the end of January. This resulted, in part, from the rise in many retail stocks. There was only a slight retracement to $15 per share as the announcement day draws near. The price closed in the middle region depicted by the technical studies on this chart. The studies are formed with 20-day Keltner Channel indicators. These depict price levels that represent a multiple of the Average True Range (ATR) for the stock. This array helps to highlight the way the price has moved from the upper extreme back to its average range and held in that range. This price move for Macy's shares implies that investors may be cautiously optimistic for the upcoming report.

The Average True Range (ATR) has become a standard tool for depicting historical volatility over time. The typical average length of time used in its calculation is 10 to 20 time periods, which includes one to two weeks of trading on a daily chart.

In this context where the price trend for Macy's has been moving from the upper extreme to the middle, chart watchers can recognize that traders and investors are expressing cautious optimism going into earnings. That makes it important for chart watchers to determine whether the move is reflecting investors' expectations for a favorable earnings report or not.

Option trading details can provide additional information to help chart watchers form an opinion about investor expectations. Option traders are favoring calls over puts, suggesting that investors are expecting good news from the company report. Supporting evidence can also be found in the comparison of the volatility range depicted on the chart by the purple lines and the purple box in the background. Even though prices have remained in such a tight range, they are drifting toward the upper half of the volatility range. This position for the price suggests that investors have high expectations for the earnings report.

The Keltner Channel indicator displays a set of semi-parallel lines based on a 20-day simple moving average and an upper and lower line. Because the upper lines are drawn by adding a multiple of ATR to the average and the lower lines are drawn by subtracting a multiple of ATR from the average price, this channel indicator makes for an excellent visualization tool when charting historical volatility.

Option traders recognize that Macy's shares are in an average range and have priced their options as a bet that the stock will close within one of the two boxes depicted in the chart between today and Feb. 26, the Friday after the earnings report is released. The green-framed box represents the pricing that the call option sellers are offering. It implies a 72% chance that Macy's shares will close inside this range by the end of the week if prices go higher. The red box represents the pricing for put options with a 74% probability prices go lower on the announcement.

It is important to note that trading on Tuesday featured over 33,000 call options traded compared to roughly 12,000 put options, demonstrating the bias that option buyers had. That only 26% of the trades were put options implies that option traders are strongly optimistic, as shown in the chart below. 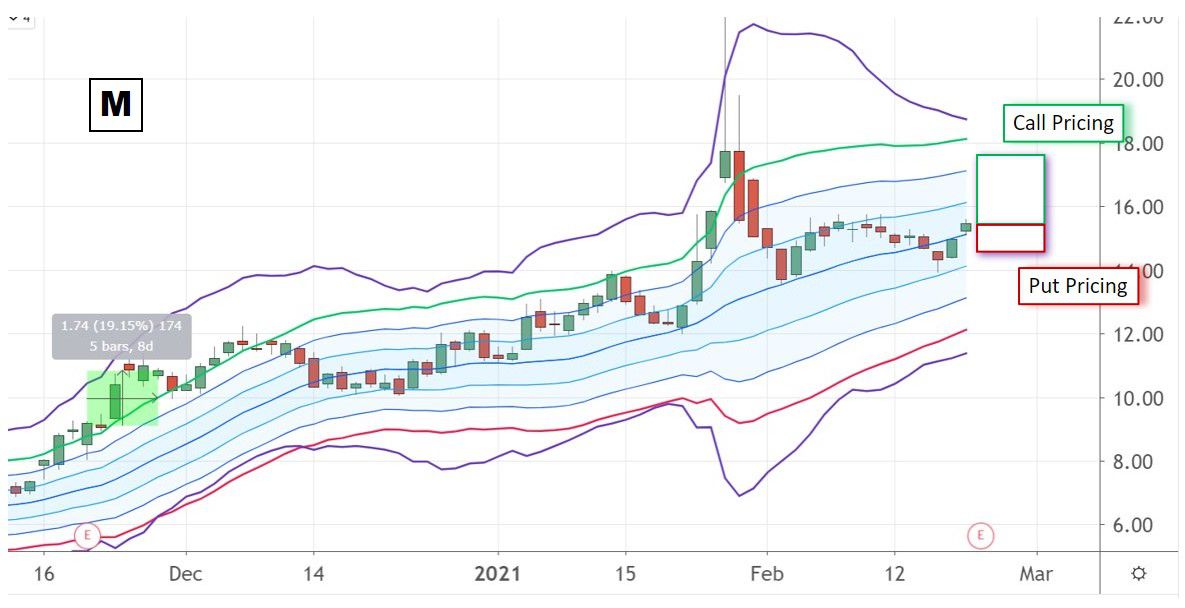 The purple lines on the chart are generated by a 10-day Keltner Channel study set at four times the ATR. This measure tends to create highly correlated regions of strong support and resistance in the price action. These regions show up when the channel lines make a noticeable turn within the previous three months. The levels that the turns mark are annotated in the chart below. What is notable in this chart is that the call pricing is larger than the put pricing, suggesting that traders expect the price to jump after earnings. 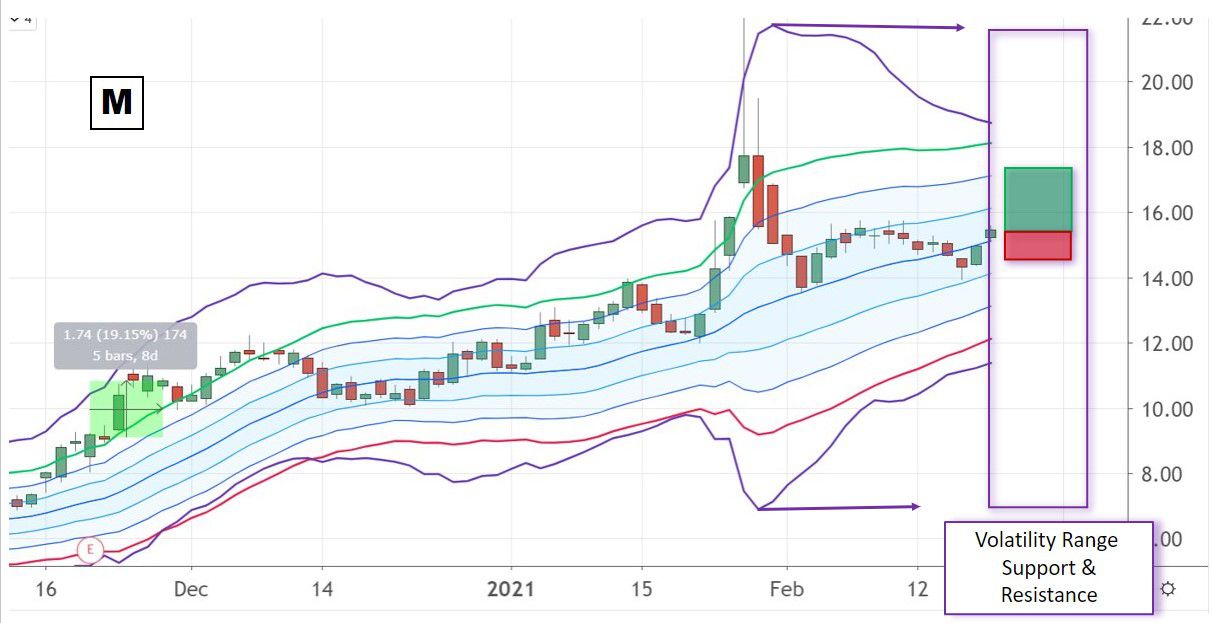 These support and resistance levels show an unusually large range of support and resistance for prices. This is likely driven by anomalous circumstances. It is possible that neither good or bad news will generate a large price move. After the previous earnings announcement, Macy's shares rose by over 19% in the days following. Investors may be expecting the same kind of move in price after this announcement. With an unusual amount of room in the volatility range, share prices are unlikely to rise or fall more than expected.

The effect of Macy's earnings report is not particularly influential to the market because of the retail sector's diminished influence on major indexes since the pandemic hit. However, the company's report occurs on the same day as two other influential stocks in the consumer discretionary sector: The Home Depot, Inc. (HD) and Lowe's Companies, Inc. (LOW). No matter what the report from Macy's says, the impact will be magnified by its timing. The combined effect of these companies' reports will likely have a significant impact on stocks in the consumer discretionary sector.

Now that more than 70% of the S&P 500 companies have reported earnings so far this season and a large majority have beaten estimates, investors will likely expect the same from Macy’s. Anything less would be a shock. A positive report could lift other stocks in the sector such as Home Depot, The Walt Disney Company (DIS), or even Amazon.com, Inc. (AMZN). It would also affect exchange-traded funds (ETFs) such as State Street's Consumer Discretionary Select Sector SPDR Fund (XLY) and potentially State Street's SPDR S&P 500 ETF Trust (SPY).

Option traders on Macy's are favoring call options by a strong margin over put options before the company's earnings announcement. Traders appear to be less nervous about bad news and more opportunistic for a possible jump higher in prices. Even if a bad report did materialize, Macy's shares may not drop significantly, because investors might want to buy the dip as the company's shares are priced so comparatively low at this time. The volatility price range size is enough to exceed the call pricing, allowing for a large move higher if the company were to somehow manage a positive surprise. Traders' expectations may be overly optimistic because of the recent activity in retail stocks. Nonetheless, they remain optimistic.