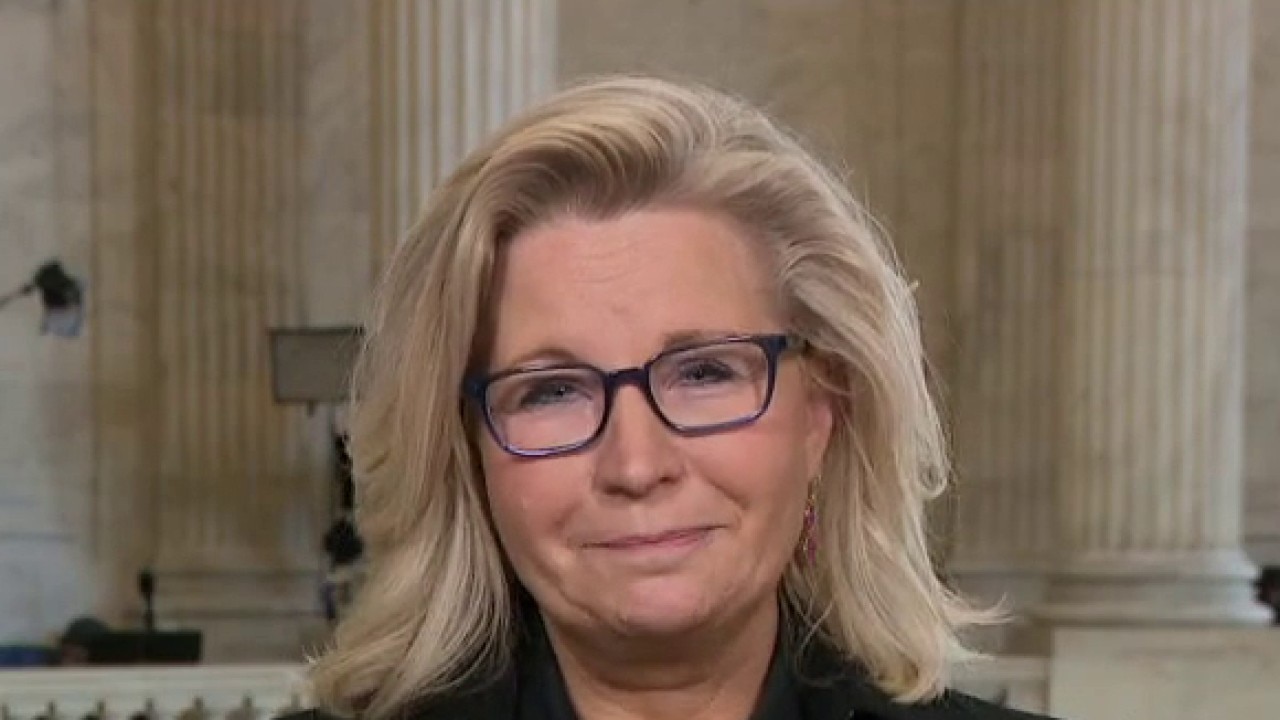 Rep. Liz Cheney reacts to the heat she’s taken from her caucus over voting to impeach former President Trump on ‘America’s Newsroom.’

As Rep. Liz Cheney of Wyoming reaches out to GOP House colleagues ahead of a Wednesday meeting to consider a push to strip the congresswoman of her No. 3 House Republican leadership position, a high-profile Republican senator is defending her.

Cheney’s under fire from numerous House Republicans over her vote three weeks ago to impeach then-President Trump on a count of inciting the Jan. 6 insurrection at the U.S. Capitol. Cheney was the most senior of 10 Republicans who joined all 222 House Democrats to impeach Trump, with 197 GOP representatives voting against impeachment.

But Sen. Lindsey Graham of South Carolina is supporting Cheney.

“I believe @RepLizCheney is one of the strongest and most reliable conservative voices in the Republican Party. She is a fiscal and social conservative, and no one works harder to ensure that our military is well prepared,” Graham tweeted on Tuesday.

Graham, a major Trump ally and supporter, emphasized in a second tweet that Cheney’s experience and leadership are “invaluable to the Republican Party.”

The congresswoman, who’s long followed in the footsteps of her father – former Vice President Dick Cheney – in advocating for a hawkish and muscular U.S. role overseas, was a vocal critic of Trump’s “America First” policies of limiting the use of American troops in international conflicts.

Graham later told reporters at the Capitol that while he disagreed with Cheney on her impeachment vote, “for me I think she on national security she’s one of the smartest people I’ve ever known” and a “valuable member” of the GOP.

Rep. Liz Cheney, R-Wyo., is calling for a temporary halt to tours at the U.S. Capitol as the coronavirus continues to spread. (Photo by: William B. Plowman/NBC/NBC NewsWire via Getty Images)

“Liz Cheney is a leader with deep convictions and the courage to act on them,” McConnell said in a statement. “She is an important leader in our party and in our nation. I am grateful for her service and look forward to continuing to work with her on the crucial issues facing our nation.”

While McConnell and Graham are praising Cheney, House GOP Leader Kevin McCarthy has given her tepid support to remain as House Republican Conference chair.

Multiple sources close to the three-term statewide representative tell Fox News that Cheney’s been working the phones, calling fellow GOP House members, with some Republicans calling the congresswoman. They add that Cheney will likely make her case at the meeting but is not expected to apologize for her impeachment vote. Instead, she’s expected to talk about the future of the Republican Party.

Last week the former president’s political action committee, Save America, released a poll that suggested that Cheney was politically wounded among Republicans by her vote to impeach Trump. The survey was showcased the next day as Rep. Matt Gaetz of Florida, a top Trump ally, took aim at Cheney at a large rally on the steps of the Wyoming capitol.

Gaetz told the crowd that he had spoken with Trump and said the former president wanted to him to share the poll results. “Liz Cheney is less popular among Republicans in her own state than Muammar Gaddafi was among the Libyans,” Gaetz cracked. 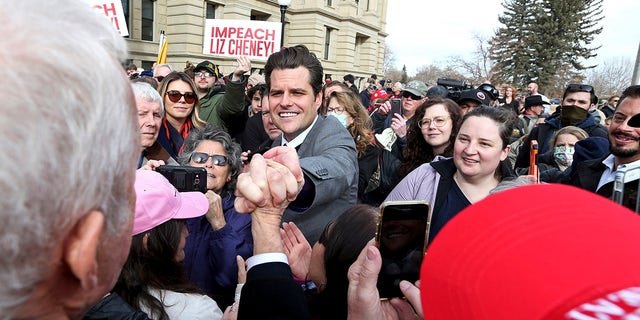 U.S. Rep. Matt Gaetz, R-Fla., grabs the hand of a supporter following a rally against U.S. Rep. Liz Cheney, R-Wyo., Thursday, Jan. 28, 2021, outside the Wyoming State Capitol in Cheyenne. Gaetz spoke to hundreds, bashing Rep. Cheney after she voted to impeach former President Donald Trump for his role in the Jan. 6 insurrection at the U.S. Capitol, and called for a group effort in finding the right nominee to replace her when she is up for reelection in 2022. (Michael Cummo/The Wyoming Tribune Eagle via AP)

Seconds later, Donald Trump Jr. called into the rally to also attack Cheney. Pointing to her father’s infamous hunting accident, when the then-vice president wounded a friend, Trump’s eldest son argued: “It seems like Liz Cheney’s favorables there are only slightly worse than her father’s shooting skills.

“Since the people of Wyoming are clearly not thrilled with Liz Cheney, let’s find someone who can replace her,” Trump Jr. implored.

But he warned against having multiple primary challengers that could divide the anti-Cheney vote in next year’s primary saying, “Let’s not split this vote up and blow an opportunity to get rid of a RINO.”

Sources tell Fox News that Wednesday’s closed-door meeting is expected to take place at 4:30 p.m. ET at the Capitol Visitor Center auditorium. They add that they’re hopeful House Republicans will be able to “blow off steam” at the meeting, with McCarthy expected to try and keep the focus on wining back the House majority in next year’s midterm elections rather than infighting between members.

A vote on stripping Cheney of her leadership position is not expected. But if a resolution is presented at the meeting, a two-thirds vote would be needed to suspend the meeting’s rules and force a vote. If the vote fails, the resolution would be referred to a committee within the House Republican Conference. That committee could then rule on the resolution favorably, bringing it back to the full conference for a vote at a later date, or they could rule on it unfavorably, which would essentially kill the move to strip Cheney of her leadership role.

The showdown over Cheney comes as the former president has repeatedly vowed to play an influential role in the GOP going forward and is also flirting with a 2024 presidential run to try and win back the White House.

While politically wounded by the Jan. 6 attack on the U.S. Capitol by right-wing extremists and other Trump supporters intent on disrupting congressional certification of Biden’s White House victory – after encouragement from the then-president – the latest polling indicates Trump remains very popular among Republicans. And Trump’s grip remains formidable over a party he reshaped and ruled with an iron first during his four years in the White House.

Rep. Adam Kinzinger of Illinois, who like Cheney voted to impeach Trump, said in an interview this week with Fox News that Wednesday’s meeting is “really going to force people out of hiding” and put them “on the record on what they want this party to look like. Is it going to be a right-wing cancel culture or are we going to be a big tent party?”

But the No. 2 House Republican, Minority Whip Steve Scalise, predicted Tuesday on Fox News’ “America’s Newsroom” with Bill Hemmer and Dana Perino that “at the end of the day, we’re going to work through that internally. We’re going to resolve these internal battles and divisions.”