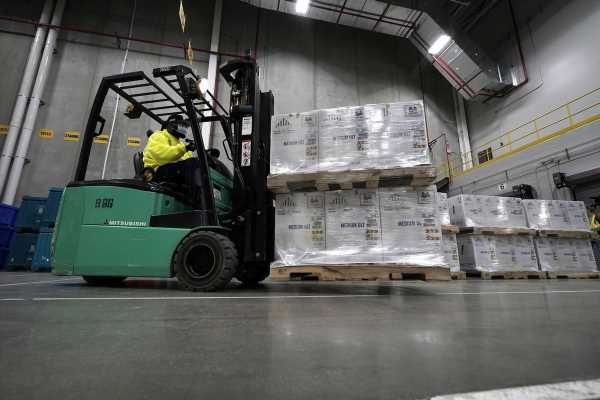 President Joe Biden said his administration intends to order 100 million more doses each of Pfizer Inc. and Moderna Inc.’s coronavirus vaccines, and at least temporarily speed up shipments to states to about 10 million doses a week.

The new purchases would increase total U.S. orders for the two approved vaccines by 50%, to about 600 million shots, according to a senior administration official — a supply that it expects to have available by the end of the summer, and which would be enough for 300 million people.

Delivering a minimum 10 million doses to states would represent about a 16% increase from the current weekly pace, though the higher pace may only last three weeks and it’s not clear where the new doses are coming from. The government also plans to give states better forecasts of forthcoming shipments — three weeks’ worth, up from one week now.

“This is going to allow millions of more Americans to get vaccinated sooner than previously anticipated — we’ve got a long way to go, though,” Biden said at the White House Tuesday, flanked by his Covid-19 coordinator, Jeff Zients. Biden cautioned that the vaccination effort is an overwhelmingly difficult logistical effort.

“A lot of things can go wrong along the way,” he said.

Biden has pledged to administer 100 million shots in his first 100 days in office, though it wasn’t immediately clear if the measures announced Tuesday would help him more easily meet that goal. He complained that “the vaccine program is in worse shape than we anticipated or expected” before entering office, though under the Trump administration, the pace of shots was already accelerating to one million per day.

The effort is also constrained by limits on the number of sites and medical professionals who can give shots. The senior administration official said the administration is working with states to relieve that bottleneck, including by delivering more doses through retail pharmacies.

The official briefed reporters Tuesday on condition of anonymity ahead of Biden’s remarks. The White House did not immediately respond to questions about the cost of the new order of doses or where the funding would come from.

Biden said he hopes that vaccinations are accelerated enough that by summer, the U.S. has a surplus.

The president has made curbing the pandemic his top priority, while warning it will drag on for months even with more aggressive action by the government. He has pleaded with Congress to pass his proposed $1.9 trillion pandemic relief bill, which would include billions of dollars to accelerate vaccinations.

Biden administration officials briefed governors on the vaccination effort on Tuesday, as well.

Biden said Monday that he thinks the U.S. can reach 1.5 million vaccinations per day, and that any American who wants a shot may be able to get one by spring. His deputies have tamped down expectations following that remark, returning to previous projections that most U.S. adults won’t be vaccinated until later in the year.

“Everybody won’t be eligible this spring, as you all know, even as the CDC continues to provide updated guidance,” White House Press Secretary Jen Psaki said Tuesday, referring to the Centers for Disease Control and Prevention.

The U.S. is administering about 1.3 million doses per day right now, according to an average compiled by the Bloomberg Vaccine Tracker. That includes Monday, when only 1.1 million shots were recorded.

The increase in weekly shipments appears to be largely from Moderna. Government data shows 10.15 million doses that will be made available to states, territories and federal entities for later shipment.

The transition between administrations created confusion about how many shots, if any, the federal government had received but not yet allocated or shipped to states. Shortly before he left office, former President Donald Trump’s administration announced it would release second doses of the Pfizer and Moderna shots that had been withheld. States subsequently complained that they saw no spike in shipments.

The senior administration official who briefed reporters on Tuesday said the federal government does not have a significant inventory of shots on hand, beyond what the official described as a small reserve for emergencies.

The two vaccines approved so far, from Pfizer and Moderna, each require two doses — meaning that 100 million shots would inoculate half as many people. Approval of a third candidate would speed vaccination rates.

Johnson & Johnson is expected to soon report results of clinical trials of its coronavirus vaccine, which requires only one shot, and could receive FDA authorization soon afterward. But the official said the Biden administration is not counting on having any additional authorized vaccines before the summer.

The U.S. recorded 166,000 new coronavirus cases on Monday, down from record highs earlier this month but still well above figures seen throughout the fall. Another 1,757 people died in the U.S., pushing the pandemic’s toll to more than 422,000 dead.