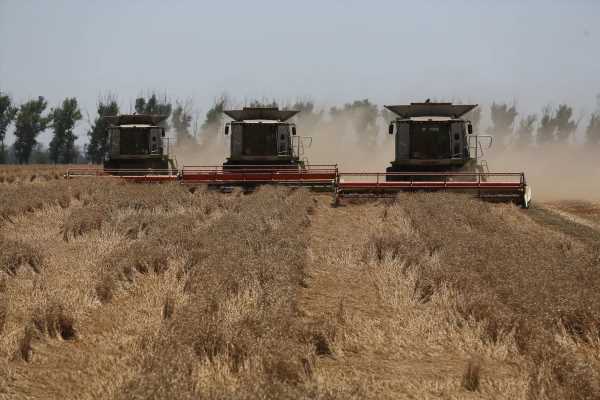 Dmitry Bravkov is the kind of farmer that makes Vladimir Putin proud. The Russian president regularly touts his country’s rise to the top of the world’s agricultural exporters as another sign of its global power.

But after 14 years of running a dairy and grain farm 300 miles southwest of Moscow, Bravkov has suddenly found himself on the wrong end of Kremlin policy. In three weeks, he’ll get less for his wheat because of new tariffs and quotas designed to curb exports and drive domestic prices lower.

With Putin’s popularity barely back from record lows, the policy is an attempt to mollify a public battered by falling incomes and rising food costs. Protests at the weekend demanding the release of jailed opposition leader Alexei Navalny now give Putin another reason to try to shore up support.

Russia’s position as the world’s biggest wheat exporter means the move is already reverberating through global markets, and a short-term domestic advantage could lead to longer-term damage to faith in the country as a reliable supplier.

“The introduction of the duty is an attempt to cash in on the farmers,” said Bravkov, 47, who employs 60 people in a village in the Bryansk region. “There’s plenty of wheat in the world. If Russia doesn’t supply it, someone else will.”

World grain prices have soared to the highest level in six years after poor weather hampered harvests in some key producers and China embarked on an agricultural buying spree. The knock-on effect is particularly acute for developing nations because food is a bigger share of household spending.

Uncertainty over Russia’s restrictions has already hurt some buyers, with top wheat importer Egypt canceling a tender on Jan. 12—a rare occurrence—after supply offers dried up.

“Russia wants to have it both ways,” said Abdolreza Abbassian, a senior economist at the UN’s Food & Agriculture Organization in Rome. “It wants to have a big chunk of the export market, and at the same time, not be exposed to problems within the global food sector. Usually such plans aren’t successful in the long-run.”

While Putin was boasting of a record harvest last year, ordinary Russians had to shell out 20% more for bread and 65% more for sugar than in 2019. Memories of food shortages in the Soviet Union and soaring inflation after its collapse have made prices a politically sensitive issue in Russia.

Russia’s history wasn’t lost on Putin as he scolded ministers on national television last month for not doing enough to stop rising prices, even as he boasted about huge grain exports. Russia’s wheat output has nearly doubled in the past two decades.

“Back then, they said that everything is available in the Soviet Union, just not enough for everyone, but there wasn’t enough because there were shortages,” he said. “Now there might not be enough because people don’t have enough money to buy certain products at the prices we see on the market.”

One day after the comments were aired—and three days before Putin was due to address the nation in his annual televised press conference—the government proposed a levy on wheat from mid-February though the end of June. The duty will start at 25 euros ($30.40) a ton before doubling from March 1. Wheat-export prices in Russia have climbed 43% in the past six months to $297 as of Jan. 20, data from consultancy IKAR show.

The government is also pressing ahead with a previously announced grain-export quota for the same period. Price curbs may be implemented on other food products such as pasta, eggs and potatoes.

Russia has a history of disrupting the wheat market with restrictions and duties. The country imposed an export tax in 2007 to combat rising food costs, helping push global wheat prices to a record, and some researchers see an export ban in 2010 as an indirect contributor to the Arab Spring uprisings.

Indeed, few other exporters have dared to go down the protectionist route because the results can be counterproductive. The strategy is particularly risky because the Kremlin has worked so hard to overtake the U.S. and European Union and become the dominant global supplier of wheat.

The measures will cost wheat farmers as much as 135 billion rubles ($1.8 billion) in potential revenue losses, and more if export duties are extended to other foodstuffs, according to Andrey Sizov Jr., managing director at consultant SovEcon in Moscow.

Importers are already turning toward other suppliers such as Australia and even India, according to Evgeniya Dudinova, a member of the International Association of Operative Millers Eurasia leadership council. In the United Arab Emirates, where she’s based, purchases from Russia have totaled about 330,000 tons so far this season, a third of last year’s volume.

Key importers will try to avoid Russian wheat when the taxes kick in, said Muzzammil R. Chappal, chairman of the Cereal Association of Pakistan. The country is the fifth-largest importer of Russian wheat this season.

At his farm, Bravkov said he hasn’t received any help from the government in the past. He’s in the process of switching from dairy to grain farming after milk prices stagnated, which will force him to lay off workers to stay profitable. “With such measures our government just helps protect our European competitors,” Bravkov said.

— With assistance by Anatoly Medetsky, and Ismail Dilawar