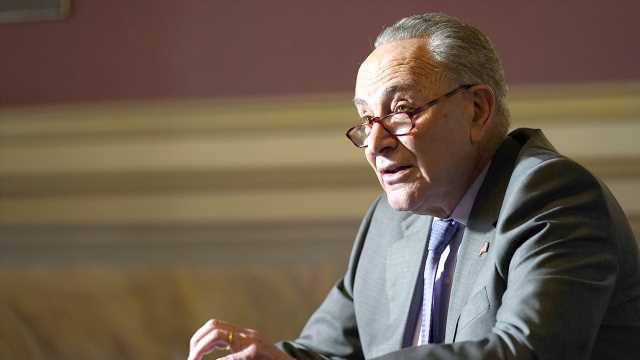 Senate Minority Leader Chuck Schumer, D-N.Y., has called on the administration to place those inside the Capitol during last week’s riots on the no-fly list, claiming that some desired to return to Washington or commit violence elsewhere.

“We are concerned about these people getting back on airplanes and doing more violence,” he said during a press conference in New York City.

He added that “the insurrectionists who breached the U.S. Capitol fall under the definition of threats to the homeland and should be immediately added to the TSA [Transportation Security Administration] no-fly list.”

“We are calling on the authorities — the FBI, the TSA — any of those who were inside the Capitol should be placed on the no-fly list and not be allowed to fly.”

In a statement Monday, TSA said it was beefing up law enforcment’s presence at three major airports in the D.C. area. The agency clarified that it was screening travelers and that those on no fly-lists would not receive boarding passes.

Schumer’s briefing came after President Trump criticized Big Tech companies earlier in the day, suggesting they were creating anger in the country.

“I think that big tech is doing a horrible thing for our country and to our country,” he told the press, apparently referring to restrictions on his account and others.

“And I believe it’s going to be a catastrophic mistake for them. They’re dividing and divisive, and they’re showing something that I’ve been predicting for a long time … But I think big tech has made a terrible mistake, and very, very bad for our country. And that’s leading others to do the same thing, and it causes a lot of problems and a lot of danger.”

When asked about his role in last week’s violence, Trump appeared to defend a speech he gave on the national mall just before rioters stormed the Capitol.

At his press conference, Schumer suggested Trump was blaming others and engaging in a “pathological technique used by the worst of the dictators.”

He added that Trump’s statements were further evidence for his ongoing demand that the president be removed from office before President-elect Joe Biden’s inauguration on Jan. 20.