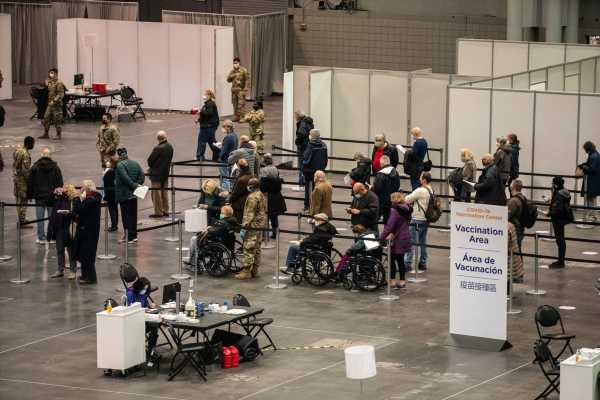 New York Governor Andrew Cuomo said he asked Pfizer Inc. if the state could buy vaccines directly from the company because the U.S. government has failed to increase supply.

The Centers for Disease Control and Prevention expanded eligibility to more than 7 million New Yorkers from 5 million “practically overnight,” Cuomo said Monday in a letter to Pfizer Chief Executive Officer Albert Bourla. At the same time, the CDC hasn’t increased — and in some cases reduced — the supply to states. New York will get 250,000 doses this week, 50,000 fewer than last week.

At that rate, it would take seven months to inoculate those eligible, Cuomo said during a subsequent press briefing. Pfizer is supplying the federal government with 200 million doses of the vaccine after receiving emergency use authorization.

No state has ever purchased vaccines directly from the producer, but “my job is to pursue every avenue,” Cuomo said. He declined to say how many doses he was seeking or how he’ll pay for it, telling reporters, “First things first. First they have to agree.” Michigan Governor Gretchen Whitmer also is seeking to buy vaccines directly from Pfizer.

The company said it’s open to collaborating with the U.S. Department of Health and Human Services in a way “that will allow the drugmaker to quickly distribute its vaccine to as many Americans as possible.”

“However, before we can even consider direct sales to state governments, HHS would need to approve that proposal based on the EUA granted to Pfizer by the FDA,” the New York-based company said in a statement.

Cuomo also said the state will give fewer or no new doses to health-care facilities that are slow to administer the vaccine, while those that are faster will get more. He pointed to a wide disparity of administration, with many places using all of their allotment and others distributing 20% to 50%.

“Places that get it out first will get priority,” he said. All facilities will have enough doses for their staff, he said.

New York has ramped up its vaccine administration over the past five weeks, from about 35,000 during the first week to 330,000 last week, the governor said. To date, more than 1 million doses have been administered.

The state is in a “footrace” with the vaccination rate and the Covid infection rate, Cuomo said. The state’s positivity rate is down statewide, and the hospitalization rate is slowing. Still, new variants of the virus could bring another wave, he said. He urged the government to immediately begin testing all international travelers and to stop those coming from the U.K., South Africa and Brazil, where variants have emerged.