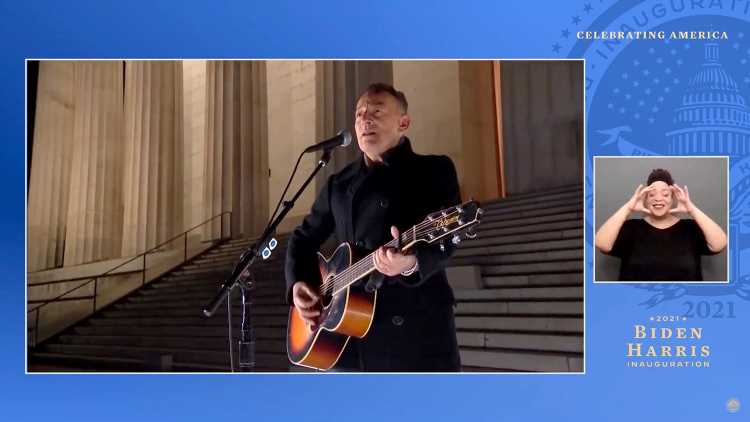 The 90-minute special, hosted by Tom Hanks, was an adjustment amid the COVID-19 pandemic as officials encouraged the public to watch inaugural events at home and switched much of the programming to remote formats.

Celebrating America would "showcase the American people's resilience, heroism, and unified commitment to coming together," organizers have said of the primetime event, meant to replace the glitz and glamor of the usual Washington, D.C., gatherings.

The special, which is airing on the major networks and online, kicked off with a performance by Bruce Springsteen, followed later by Jon Bon Jovi and the Foo Fighters.

There were segments spotlighting regular people who had distinguished themselves through service as well.

The special included a mix of remote and pre-recorded appearances.

Partway through, Hanks introduced Biden from the steps of the Lincoln Memorial for a brief speech following his earlier inaugural address at the U.S. Capitol.

"We've learned again that democracy is precious," Biden said. "Because of you democracy has prevailed. That's Jill and I, Kamala and Doug, wanted to make sure our inauguration is not about us but about you, the American people."

Early on in the show, audiences watched as Brayden Harrington – a young boy who spoke about how Biden made him feel confident despite his stuttering problem during the Democratic National Convention — read lines from John F. Kennedy's inaugural address.

Eva Longoria and Kerry Washington also appeared and organizers had said they "will introduce segments throughout the night ranging from stories of young people making a difference in their communities to musical performances."

Ant Clemons and Justin Timberlake performed their song "Better Days" and Demi Lovato, Katy Perry and others are set to sing.

Timberlake said on the Today show that he was "incredibly excited" by the opportunity, calling it an "honor."

The song's message, as Hubbard (one half of Florida Georgia Line) said, is of unity, a parallel to Biden's campaign.

Perry alluded to her own performance as part of Celebrating America late in a photo posted to Instagram on Tuesday.

The photo featured several patriotic microphones from her archives, and later that night, the Biden Inaugural Committee confirmed the news that Perry would indeed be featured in the special.

The two were sworn in to office on Wednesday morning, kicking off a day of ceremonies celebrations that included a virtual parade, wreath-laying ceremony and military salute.

Celebrating America began airing on Wednesday at 8:30 p.m. ET on ABC, CBS, CNN, MSNBC and NBC as well as Facebook, Twitter and YouTube and other streaming platforms.