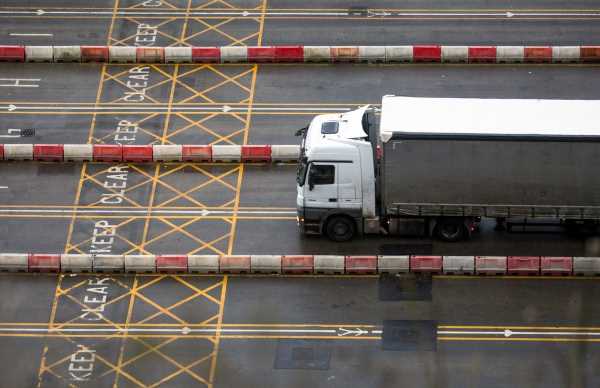 A week on from Brexit, the main road to Dover has been so quiet that officials were able to close half of it Thursday for a litter-picking operation without causing delays for drivers.

But behind such placid scenes, many truckers are still warning of chaos as they struggle to adjust to the new paperwork required by Britain’s departure from the European Union. Drivers are being held up for hours because they lack the right documents, they say.

With traffic well below its usual levels, the pain has so far manifested itself out of sight at factory gates and truckers’ depots. It’s likely to spread to the ports as activity rebounds in coming days, according to seven firms interviewed by Bloomberg.

“It’s an absolute mess,” said David Zaccheo, operations manager at Alcaline U.K. Ltd., whose fleet of 145 vehicles shuttles goods between Britain and the EU. “What’s going to happen next week? We’re not even that busy at the moment.”

Zaccheo said his firm has had vehicles stuck in Italy since Monday because of a lack of correct transit documents. In another case, a trailer destined for Milan had to wait for two days in the U.K. before it could move because it didn’t have the right paperwork, he said.

Not So Fast! What Brexit Means for Border Crossers: QuickTake

Faced with the threat of chaos at the border in the weeks after Brexit, many firms decided to stockpile goods or delay deliveries, leaving Dover eerily quiet. Traffic through the port is down 85% from its 2019 average. With the industry expecting activity to pick up in coming days, Britain faces the first major test of its Brexit readiness.

The Cabinet Office, the government department responsible for Brexit preparations, didn’t immediately respond to a request for comment.

While the U.K. may have struck a trade deal with the EU avoiding tariffs and quotas, companies are facing new frictions affecting cross-border trade. Firms now have to fill in forms such as customs declarations and export health certificates that weren’t required when Britain was a member of the bloc. The problem, some logistics firms say, is many customers don’t understand what documents are required.

Ellis Blackham, an account manager at JJX Logistics, a Kingswinford, England-based firm that moves goods from the U.K. to the EU, said it took six hours — at least three times longer than usual — to load one of its trucks up with pharmaceutical products bound for Germany because the customer didn’t have the correct paperwork.

“It’s a nightmare,” Blackham said. “It starts right from the top and goes all the way down, the level of confusion.”

He said another company had sent them a pallet of manufactured goods to be shipped to France, but they had provided no accompanying documents. They were surprised when they were told it wouldn’t be possible to send it, Blackham said.

“The customers are massively confused about what’s needed,” he said. “I don’t expect it to be until March at least before people familiarize themselves.”

Bowker Group, a Preston, England-based company that moves freight into the EU, said it had a trailer of chemicals stuck on a quay in Belgium for more than two days this week because of confusion over who was responsible for obtaining the customs clearance.

“It’s fire-fighting all the time at the moment,” said Jason Tiffen, international operations manager at Bowker. “Customs clearance agents are overstretched and under-resourced.”

The industry has long been warning of a shortage of trained staff to fill out the extra 400 million customs declarations that will be required each year for goods moving between Britain and the EU at a cost of about 13 billion pounds ($18 billion).

The Customs Clearance Consortium, which is helping to run a U.K.-government-backed program to assist traders with the forms, told customers this week there is still a “huge shortage” of agents.

“The first few days of the new rules have been very tough,” according to the note by Robert Hardy, the consortium’s co-founder. “There are so many new processes and a massively steep learning curve.”