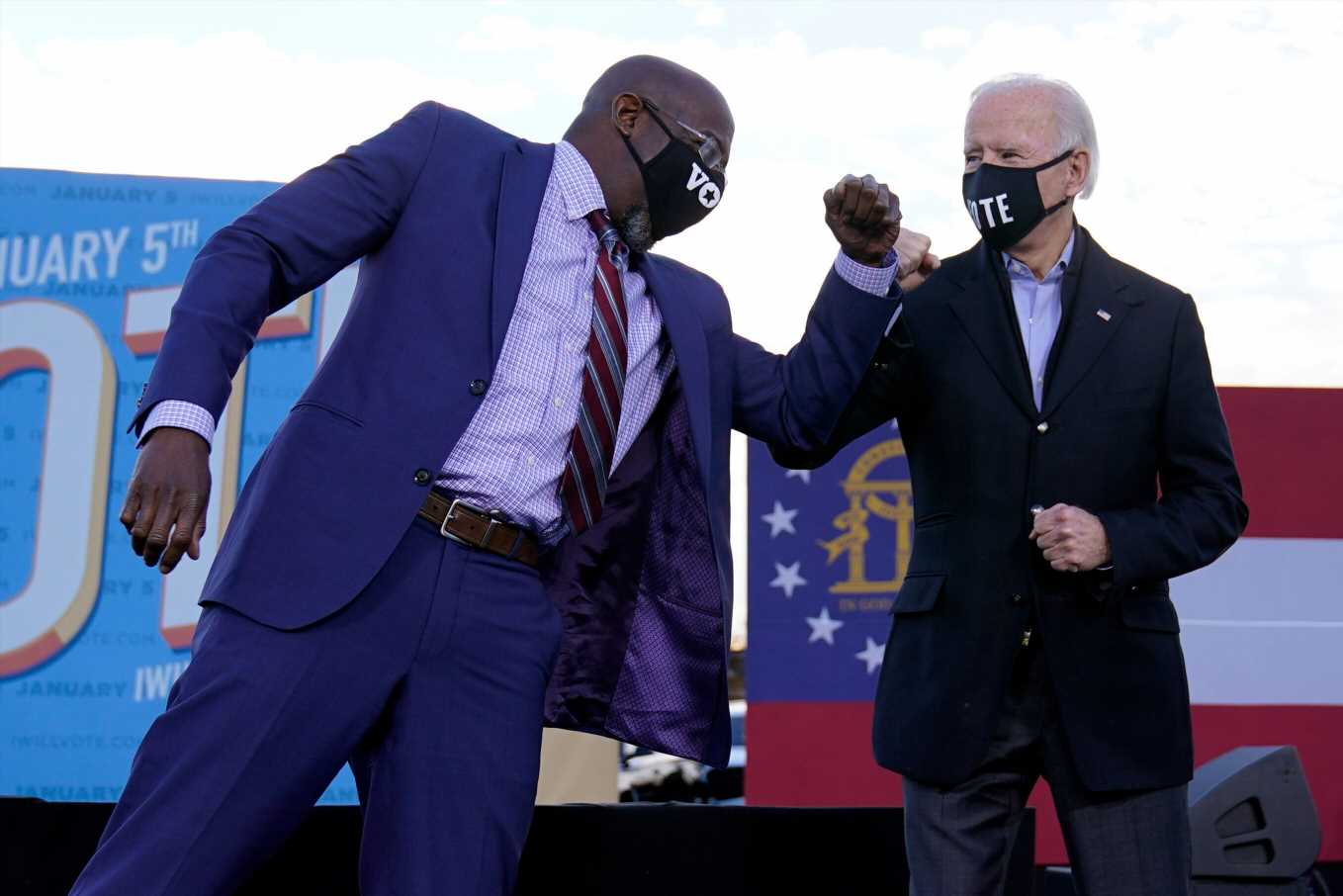 President-elect Joe Biden’s Democratic Party is on the verge of seizing complete control of the federal government by the skin of its teeth, empowering the party to make progress on key issues but likely hindering its grandest ambitions.

While neither race had been officially called by the Associated Press by early Wednesday morning, Democrats Raphael Warnock’s and Jon Ossoff’s expected victories in Georgia means the party would have a bare 50-seat Senate majority to go along with its narrow 222-seat majority in the House of Representatives. Biden is set to move into the White House on Jan. 20.

It will mark the first time Democrats had unified control of the federal government since 2010. But while President Barack Obama started with a substantial 60-seat majority in the Senate, Biden, along with Senate Minority Leader Chuck Schumer (D-N.Y.) and House Speaker Nancy Pelosi (D-Calif.), will operate with much tighter margins.

In some ways, the immediate Democratic agenda won’t change much. Biden has already announced a handful of executive actions he’ll take on his first day in office, including rejoining the Paris climate accord and ending President Donald Trump’s ban on travel that targeted several Muslim-majority countries. Progressives will continue to push Biden to be more ambitious with his executive actions, though he had indicated he would like to try working with Congress first.

There is one obvious change: Some Americans should see additional money in their pockets, since Biden promised quick approval of $2,000 coronavirus relief checks if Warnock and Ossoff won.

“If you send Jon and the reverend to Washington, those $2,000 checks are going out the door, restoring hope and decency and honor to so many people struggling right now,” he said during an election rally in Atlanta on Monday.

Unified control of Congress means Democrats will have at least three chances to pass significant pieces of legislation, provided they can keep the party’s moderate and progressive wings on the same page. The catch? All of those pieces of legislation will be considered under the budget reconciliation rules, which don’t allow for provisions that don’t directly affect the federal budget and which require the proposals to be revenue-neutral over the course of a decade.

Democrats could use reconciliation to pass major health care or climate legislation ― Biden backed both a public option for health insurance coverage and a significant investment in green infrastructure during the presidential campaign ― but it would be difficult to use the process to enact gun safety laws or large-scale immigration reform.

Other ambitious pieces of legislation will still require significant cooperation from Republicans, along with consent from moderate Democrats like West Virginia’s Joe Manchin and Arizona’s Kyrsten Sinema, to hurdle the Senate’s 60-vote requirement and avoid filibusters. Though Democrats had hopes before November, their slim Senate majority makes it almost impossible to see major filibuster reform in 2021.

But control of the Senate does have plenty of other benefits: Democrats will chair major committees, with Sen. Bernie Sanders (I-Vt.) taking over the Senate Budget Committee and Sen. Sherrod Brown of Ohio leading the Banking Committee. Democrats will also control oversight hearings, blocking Republican plans to investigate Biden’s son Hunter and other right-wing boogeymen.

The other major shift will come with nominations. Democrats and Republicans have slowly chipped away at the ability to filibuster nominees for the courts and Cabinet. This means an easier path to confirmation for potentially controversial Biden nominees, including Neera Tanden, Biden’s pick to run the White House Office of Management and Budget, whose past tweets criticizing Republican senators have drawn significant attention.

It also means Democrats can respond to Trump and Senate Republican Leader Mitch McConnell’s stacking of the federal courts over the past four years. And it means Biden can nominate justices to the Supreme Court without requiring GOP support ― potentially clearing the way for the retirement and replacement of 82-year-old liberal Justice Stephen Breyer. Biden has promised to make a Black woman his first Supreme Court nominee.