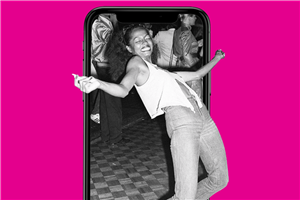 Poshmark files to go public after turning profits this year

A controversial iPhone app that promised to connect cooped-up social butterflies with the nearest pandemic party was banned by Apple — but only after a reporter tweeted about it.

Vybe Together, whose slogan is “Get your party on, Get your rebel on,” was removed from the iOS App Store this week, The Verge reports.

“Miss playing beer pong, flirting with strangers, and generally just having a blast with the crew? Vybe is here for you,” the app’s website reads.

The app had stayed largely under the radar for most of its life until New York Times reporter Taylor Lorenz tweeted about it. A day later, the app was gone.

Health experts have warned against large indoor gatherings as cases of the deadly coronavirus have spiked leading into the winter months.

It’s unclear when the party app was approved by Apple, but with only 25 reviews it appeared to be relatively new. Apple says it conducts a careful review process of the apps in its store, including “over 500 dedicated experts around the world.”

Vybe worked by allowing hosts to post about events they were hosting, which users could then apply to attend. Gatherings of more than a few people have been illegal in much of the country since the coronavirus first began shutting down the US in March.

Vybe’s Instagram page, which had just 804 followers as of Wednesday morning, had an updated description confirming that the “App Store took us down!!!” and vowed that “We Will be back!!”