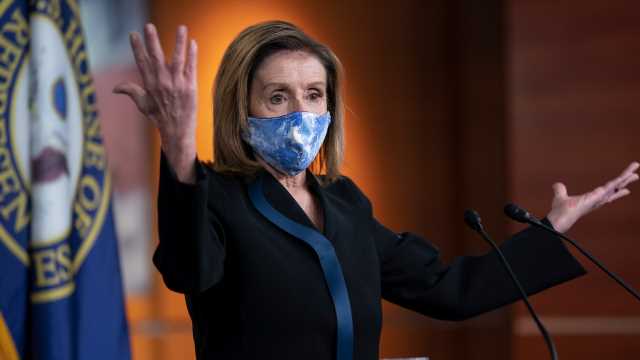 House Democrats tap Nancy Pelosi for another term as speaker

House Speaker Nancy Pelosi, D-Calif., said on Friday that she was willing to move forward with a smaller coronavirus relief package with President-elect Biden headed to the White House and a vaccine on the way.

Pelosi previously encountered criticism for not supporting a moderate Democratic proposal, insisting on a much larger price tag. The current proposal from the Problem Solvers Caucus, a group of moderate Democrats, is $908 billion, significantly less than the $1.5 trillion proposed before the election. In October, the White House had also proposed a $1.8 trillion package, roughly twice the size of the one Pelosi is now backing.

When asked about her shift on supporting the much smaller package, Pelosi cited "a new president and a vaccine."

She added that the current proposal "has simplicity, it's what we had in our bills, it's for a shorter period of time, but that's O.K. now because we have a new president."

Pelosi also clashed with a CNN reporter who asked whether it was a mistake not to accept a scaled-down relief package.

"I'm going to tell you something," she said, pointing her finger. "Don't characterize what we did before as a mistake, as a preface to your question, if you want an answer. That was not a mistake. It was a decision, and it has taken us to a place where we can do the right thing without other, shall we say, considerations in the legislation that we don't want."

The election of Joe Biden as president means Democrats don’t necessarily feel they have to hold out to get everything they want in one bill since they view Biden as a willing partner to pass additional COVID-19 relief if needed next year.

Rep. Josh Gottheimer, D-N.J., co-chair of the Problem Solvers Caucus that backed the $908 billion bill said he’s been telling colleagues this legislation is an “emergency relief short-term package” to get businesses and families through the tough winter months, and not the last chance at COVID relief. “This is just … a down payment but it covers the major priorities that we have to address right now,” Gottheimer told Fox News.

Biden similarly said this week that the scaled back relief was a "down payment."

The Speaker's comments came after months of stalled negotiations and as both sides underscored the consequences of delaying relief. Senate Majority Leader Mitch McConnell, R-Ky., had wanted to stick to a roughly $500 billion package that he said President Trump would sign into law.

McConnell shot down the $980 billion package, saying on Tuesday, "We just don't have time to waste time."

In backing the recent proposal, Pelosi and Senate Minority Leader Chuck Schumer, D-N.Y., said "the need to act is immediate."

"In the spirit of compromise, we believe the bipartisan framework introduced by Senators yesterday should be used as the basis for immediate bipartisan, bicameral negotiations," the two said in a joint statement. "Of course, we and others will offer improvements, but the need to act is immediate and we believe that with good-faith negotiations we could come to an agreement."