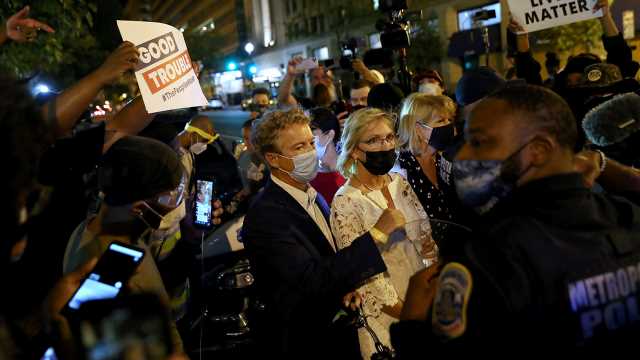 Angry protesters surrounded Sen. Rand Paul and his wife Kelley as they tried to return to their D.C. hotel after President Trump’s White House speech to the Republican National Convention.

Kelley Paul, wife of Sen. Rand Paul, R-Ky., weighed in on the violence that took place over the weekend against Trump supporters and said what she saw "brings back awful memories" that she and her husband experienced during the Republican National Convention.

More than 20 people were arrested amid violent clashes between supporters of President Trump and counterprotesters following the "Million MAGA March" in the nation's capital on Saturday.

Several videos that circulated on Twitter over the weekend show anti-Trump demonstrators shouting at families, sucker-punching people in the street, and harassing an elderly woman carrying a Trump flag.

Others were doused with liquid substances and hit with eggs.

Videos also show counterprotesters marching in the streets and tossing what appeared to be fireworks into an outdoor seating area of a restaurant while diners were seated.

On Saturday night, Kelley Paul took to Twitter and reacted to what she was seeing taking place at the nation's capital.

"Watching video of people being assaulted and mobbed by BLM / Antifa in DC tonight brings back awful memories," she wrote. "Want an example of media bias? When @RandPaul and I spoke out about our mob assault, the @AP reported our claim was 'without evidence' despite 10 minutes of video."

She was referring to the harassment she and her husband faced after leaving the White House on the final night of the GOP convention back in August.

At the time, The Associated Press ran the headline "Sen. Paul complains about 'angry mob' encounter after RNC," and began its report with "Sen. Rand Paul, who was surrounded by screaming protesters when he and his wife left President Trump's Republican National Convention speech at the White House, claimed without evidence on Friday that he had been 'attacked by an angry mob' of the type that would be unleashed in Joe Biden’s America."

Following the hostile altercation, Kelley Paul called out Politico for appearing to downplay the incident by saying "Protesters confront Rand Paul outside White House after RNC."

"No @politico, we were not ‘confronted’ by protestors. We were circled by a hateful mob shouting vile expletives, preventing us from moving," Paul tweeted.

Senator Paul's office did not immediately respond to Fox News' request for comment.