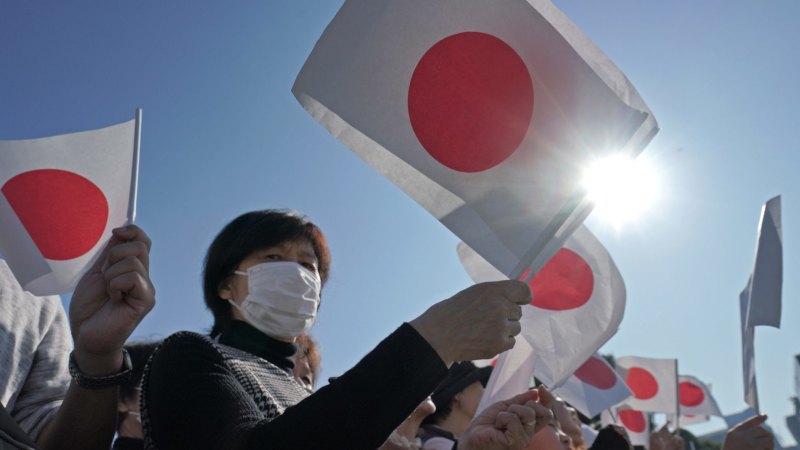 The decision to shun strict lockdown measures bore fruit for Japan as its economy surged out of recession in the third quarter, helped by a "Zoom boom".

The world's third largest economy is expected to continue its recovery next year, having signed a historic trade deal with 14 other countries after seven years of talks. 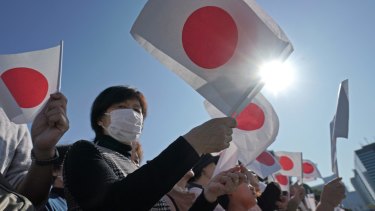 Official data showed Japanese GDP grew a better-than-expected 5 per cent in the three months to September, after three quarters of contraction, pushing stocks on the Nikkei 225 to a 29-year high.Credit:AP

Official data showed Japanese GDP grew a better-than-expected 5 per cent in the three months to September, after three quarters of contraction, pushing stocks on the Nikkei 225 to a 29-year high.

The country's economy had shrunk 8.2 per cent in the second quarter, revised figures revealed – more than the previously estimated 7.9 per cent and the worst quarterly change since comparable data became available in 1980.

Like other Asian economies, the world's biggest producers of electronic devices, Japan is benefiting from the rise in demand for computer hardware as more people work from home – what Rory Green, an economist at research firm TS Lombard, terms the "Zoom boom".

Japan has also avoided a tough lockdown, with no enforcement mechanism to shutter businesses or keep people at home, although its economy was affected by the national state of emergency imposed from April to June, particularly as incoming tourism largely vanished. Before COVID struck, Japan had experienced years of booming tourism and was one of the travel sector's biggest growth stories.

Another factor in Japan's recovery has been a massive fiscal injection, with every adult and child in the country sent the equivalent of £682 ($1228) in stimulus funds earlier this year. Last week, Yoshihide Suga, Japan's prime minister, instructed ministers to draw up a fresh economic stimulus package.

The effects of the initial measures were clear in the latest figures, with a 2.2 per cent quarter-on-quarter rise in public spending.

Naoya Oshikubo, senior economist at Sumitomo Mitsui Trust, expects GDP to keep climbing in the fourth quarter, "albeit at a slower pace", as pent-up demand stumbles due to second waves of COVID overseas. The Japanese economy is also predicted to be one of the main beneficiaries of the Regional Comprehensive Economic Partnership (RCEP), agreed on Sunday with the 10 members of the Association of Southeast Asian Nations (Asean) – Brunei, Cambodia, Indonesia, Laos, Malaysia, Myanmar, the Philippines, Singapore, Thailand and Vietnam – and Australia, China, New Zealand and South Korea. 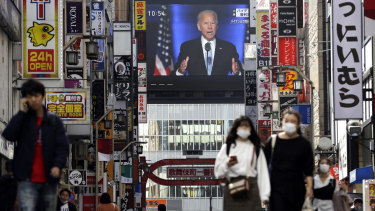 Japan has also avoided a tough lockdown, with no enforcement mechanism to shutter businesses or keep people at home.Credit:AP

RCEP's 15 members generated $26 trillion ($35.5 trillion) of GDP last year, almost a third of world output. That makes the new free trade area slightly larger than that covered by the US-Mexico-Canada Agreement and significantly bigger than the Comprehensive and Progressive Agreement for Trans-Pacific Partnership.

Negotiations had stalled when India dropped out last year, but even if New Delhi never chooses to join the bloc, by HSBC's sums, the deal will still account for more than half of global GDP by 2030. It may be shallower than the Comprehensive and Progressive Agreement for Trans-Pacific Partnership (CPTPP) but it marks a significant step towards cementing Asia as a trading zone such as Europe or North America.

The signatories were likely spurred into action by Trump's "overt disregard" for the rules-based trading system, according to Wendy Cutler, of the Asia Society Policy Institute and former acting deputy US trade representative.

"By signing the RCEP agreement, the member countries made a forceful statement in favour of trade liberalisation, open markets and the importance of rules to govern flows of goods and services," she says.

"As the Biden team re-engages globally it will find a different Asia than that of four years ago." The biggest impact of the deal will be on rules of origin, which determine where a product is made, so that something manufactured in one RCEP country will not need different paperwork to prove where it came from if exported to other member countries.

In streamlining the various overlapping preferential trading arrangements that most RCEP members already have with each other, by establishing common trade rules, the deal should help to reduce trade costs for businesses.

The agreement will also eliminate tariffs and quotas on 65 per cent of goods traded within the region, with other tariffs and restrictions expected to be liberalised over the next 20 years, eventually covering more than 90 per cent of trade within the bloc.

The terms are expected to take effect next year once the deal is approved by either half the membership or six Asean economies plus half the non-Asean countries.

As Frederic Neumann, co-head of Asian economics research at HSBC, puts it, the deal "may reinforce a trend that's been already under way for decades: that the global centre of economic gravity keeps pushing relentlessly to the East".