The Walt Disney Co. (DIS) is a global conglomerate whose diverse businesses are tied together by a strong brand that commands emotional loyalty from consumers of all ages. But the company is facing one of its biggest challenges ever in the COVID-19 pandemic. Revenue is collapsing across many of Disney's traditional businesses, such as theme parks, as people avoid crowded places amid the health crisis. The only bright spot may be Disney's young, rapidly growing streaming entertainment service, Disney+.

Investors will watch to see how the pandemic is affecting these businesses — and Disney's overall results — when the company reports earnings on November 12, 2020 for Q4 FY 2020.﻿﻿ The company's fiscal year (FY) ended in September. Analysts expect the company to report its first adjusted loss per share in at least four years as revenue plummets year over year (YOY) for the second quarter in a row.﻿﻿

Investors will focus closely on revenue from Disney's Parks, Experiences and Products segment, a key metric that includes the company's theme parks, cruise lines, resorts, and merchandise sales. This Disney segment has been most adversely impacted by the pandemic.﻿﻿ Analysts expect revenue to plunge, although not as severely as in the third quarter.﻿﻿

The performance of the Disney+ streaming entertainment business, another key metric, also will be scrutinized by investors. The online streaming service was only launched in November of last year, and has grown rapidly amid the pandemic. Analysts forecast explosive growth in Disney+ subscriptions compared to Q1 FY 2020, the service's first quarter.﻿﻿

Shares of Disney briefly outperformed the broader market around this time last year. But as news of the coronavirus began to spread in early 2020, that performance began to wane and turned to underperformance around the middle of January. The underperformance continued throughout the market crash earlier this year and the subsequent rebound. Disney's shares have provided a total return of 4.0%, below the S&P 500's total return of 14.8%. 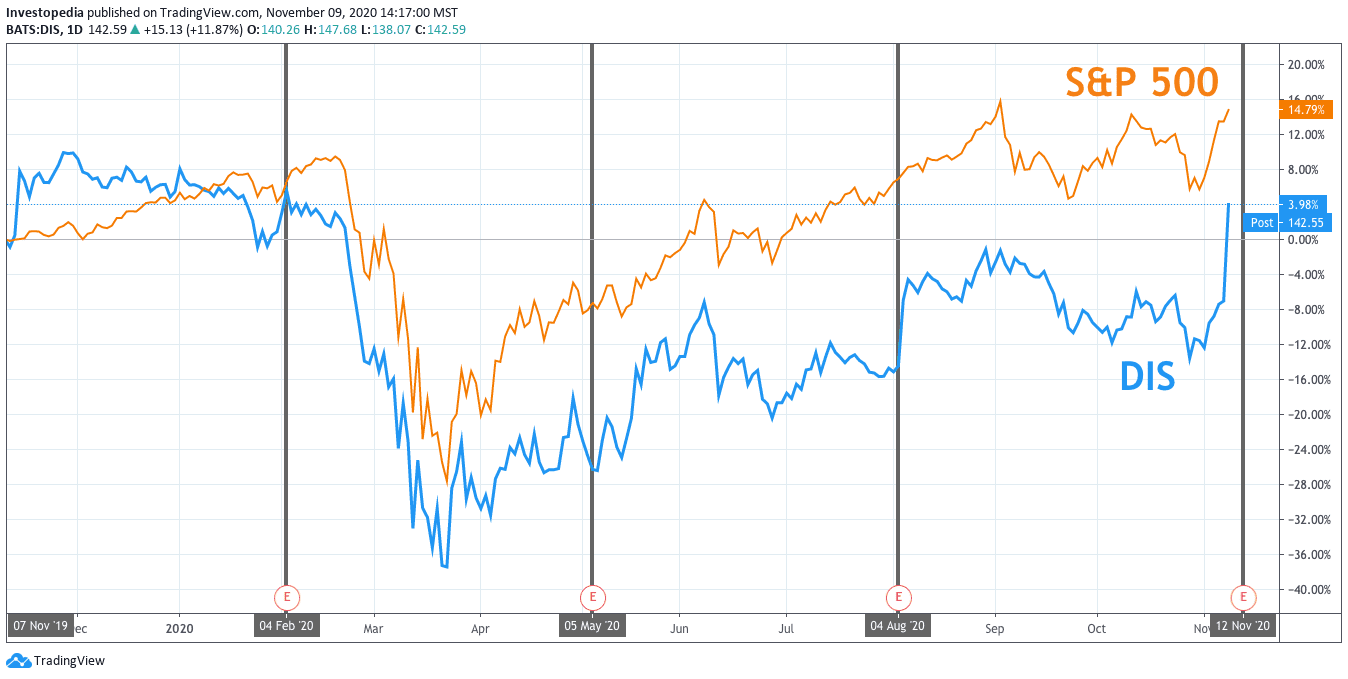 Disney's stock jumped after reporting Q3 FY 2020 earnings that beat analysts' expectations by a wide margin.﻿﻿ But it was still one of the company's worst quarterly reports in recent years. Adjusted earnings per share (EPS) plunged 94.0% as revenue sank 41.9%, marking the biggest decline in either metric in at least 15 quarters.﻿﻿ After the August 4, 2020 report, the stock made moderate gains through the end of the month, and then began to trend lower up until the start of November.

Unlike the third quarter, Disney badly missed earnings expectations in Q2 FY 2020, which ended March 28, 2020.﻿﻿ It was the first quarter that Disney's operations were affected by the pandemic. The virus forced the company to close theme parks and retail stores, suspend cruise voyages and guided tours, and delay or cancel theatrical releases, among other actions.﻿﻿ Revenue for the quarter rose 20.7% but adjusted EPS fell 62.7%.﻿﻿

Analysts are expecting Disney's poor performance to persist in Q4 FY 2020. Revenue is forecast to fall 26.8%, the second consecutive quarter of YOY declines. After seven straight quarters of falling adjusted EPS, Disney is expected to report its first adjusted loss per share in at least 16 quarters. For all of FY 2020, analysts estimate annual adjusted EPS and revenue to decline 73.1% and 7.1%, respectively. It would mark the largest decline in either metric in at least seven years.﻿﻿

As mentioned above, investors will watch the revenue performance of Disney's Parks, Experiences and Products segment, one of the company's biggest businesses. The segment includes theme parks, resorts and spas, a cruise line, vacation club, and guided tours. It also generates revenue through consumer products, which includes the licensing of trade names and other intellectual properties to manufacturers, game developers, publishers, and retailers, as well as sales of branded merchandise.﻿﻿

The Parks, Experiences and Products segment has been severely affected by COVID-19 and the related measures taken to limit its spread, including theme park closures and suspension of cruise voyages. Prior to the outbreak of the coronavirus, the segment was posting solid growth. In both Q4 FY 2019 and Q1 FY 2020, YOY revenue growth was above 8.0%. But in Q2 FY 2020, revenue fell 10.2%, the first decline in at least 13 quarters. Revenue then plunged 85.1% in Q3 FY 2020. Some of Disney's parks have reopened on a limited basis, but cruise line voyages remain suspended.﻿﻿ ﻿﻿ Analysts expect revenue for the segment to decline 67.6% in Q4 FY 2020.﻿﻿

On a positive note, the company's new Disney+ streaming entertainment subscription service is thriving in its first year of operation amid the pandemic. Millions of consumers, including entire families, are watching more movies and other entertainment as they shelter at home. Launched last fall, Disney+ offers Disney, Pixar, Marvel, Star Wars, and National Geographic branded programming, as well as thousands of additional TV series and hundreds of movies from the company’s programming catalog.﻿﻿

Disney+ has posted major growth while competing against more established streaming rivals such as Netflix Inc. (NFLX) and Amazon.com Inc.'s (AMZN) Prime Video, and also Apple Inc.'s (AAPL) Apple TV+, another new entrant. Since the end of Q1 FY 2020, the quarter in which the service was first launched, the number of Disney+ subscribers has more than doubled from 26.5 million to 57.5 million at the end of Q3 FY 2020. It took Netflix approximately 2.5 years to accomplish the same feat over five years ago.﻿﻿ Analysts expect Disney+ subscriptions to climb to 66.2 million in Q4 FY 2020.﻿﻿