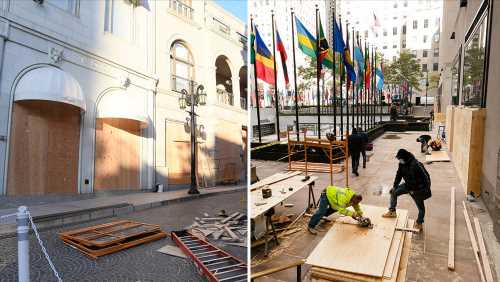 Things have been thankfully quiet so far, but law enforcement across the country are preparing for a long and potentially riotous Election Night, especially in the nation’s two largest cities and in most battleground states.

Though voting has been heavy but placid at the polls so far, the LAPD and the NYPD aren’t taking any chances, whether poll-leading Joe Biden wins or Donald Trump pulls off a reelection upset. As swaths of the bi-coastal metropolis’ are boarded up, the men and women in blue are both on high alert in case things go south and supporters of either candidate take to the streets in non-peaceful ways.

“The LAPD is communicating with our local and state emergency partners to coordinate our response and plan for any protests or groups that might become violent,” the nearly 10,000-officer strong department said in a statement issued on October 27. “The department has modified deployment to ensure a sufficient number of officers will be available to work evenings and into the weekend,” the LAPD added.

While the LAPD did not have any current plans to update its position of last week, when contacted by Deadline today, the Michel Moore-run cop shop isn’t pulling punches either.

“In line with the Department’s core value, of Quality Through Continuous Improvement, officers are receiving ongoing training on crowd control and crowd management in preparation for any protest activities related to the election,” the LAPD said last week, and reiterated today. The department will be “maximum measures to shut down any eruption,” a law enforcement source told Deadline, with shuttered DTLA and Hollywood seen as the most likely sites of unrest.

This afternoon, with several hours of voting still to go in the City of Angels, the LAPD expanded its list of “prohibited items” at demonstrations to include laser pointers and laser devices:

Over in neighboring Beverly Hills, the 130-officer equipped police force has gone into maximum deployment from October 31 to November 7. The ritzy town has been the battleground for pro-Trump and anti-Trump demonstrations and protests for weeks, some that have turned violent. With many businesses putting plywood over their windows, Rodeo Drive is closed to “vehicle and pedestrian traffic” today and tomorrow, according to Chief Dominick Rivetti.

As well as active duty BHPD officers putting in 12 hours on, 12 hours off shifts this week, the department has sub-contracted a S.W.A.T. team and 80 private security guards too. The city of Beverly Hills is as prepared as it can be,” Lt. Max Subin told Deadline today. “We are the best prepared in the country, the state and I would dare even say the nation,” he stated.

Around the nation, law enforcement is preparing if things take a turn for the worst. In no small part, that state of affairs comes after the violence that piggy backed on nationwide peaceful protests for racial justice and against police brutality earlier this year and in recent weeks. Protests that often saw vigilante forces take to the streets, sometimes fatally as in the multiple shootings by Kyle Rittenhouse in Kenosha, Wisconsin in August.

How To Watch Tuesday’s Election Coverage Online & On TV

As a self-described “unscalable” wall has been put up around the White House and additional troops are deployed to DC, Wisconsin, Illinois, Florida, about 13 other states have called out the National Guard for Tuesday. In total, about 3,500 National Guardsmen have been put on active Election Day duty today in America, including in the summer protest hot spot of Portland. As another sign of this being a very different case of democracy in action than previously, that total is more than double the number of National Guardsmen than usual on Election Days past.

The FBI is “aware of tensions” around potential actions by militia groups in Michigan, Oregon, Virginia and Pennsylvania in the case of a disputed Trump loss, says a source at the Bureau. However, as the former Celebrity Apprentice host has openly advocated his supporters to “stand by,” the FBI is keeping pretty tight lipped otherwise about what direction those circumstances could or could not take.

In NYC, tight lipped is not how one would describe the police, at least when it comes to Election Day.

As Chief Terence Monahan outlined on October 20, the NYPD has officers “at the 1,200 polling locations across the five boroughs” today. “It is no secret that this election is more contentious than in years past,” Chief Monahan added. In fact, earlier today, the department jumped into action over a “dispute” in Brooklyn.

With the 36,000-officer strong NYPD at the ready, for better or worse, Chief Monahan just gave an update in the last hour in the “zero tolerance” Big Apple. Surrounded by key cop brass, he declared that “as we are more than halfway through this Election Day, currently there are no major incidents to report across the city and we do not expect any as the day goes on.”

“The NYPD, as always, will facilitate any possible peaceful protest,” the Chief proclaimed, in full knowledge of the criticism the force has faced in the past several months. However, with “thousands of additional cops at the ready, Monahan did issue a warning for when the sun goes down: “But my message to anyone who wants to cause violence and destruction is, don’t even try it. We know who you are and you will be arrested.”

Watch Chief Monahan and other members of the NYPD update the situation in the city here:

We’ll update if necessary as the day goes on.