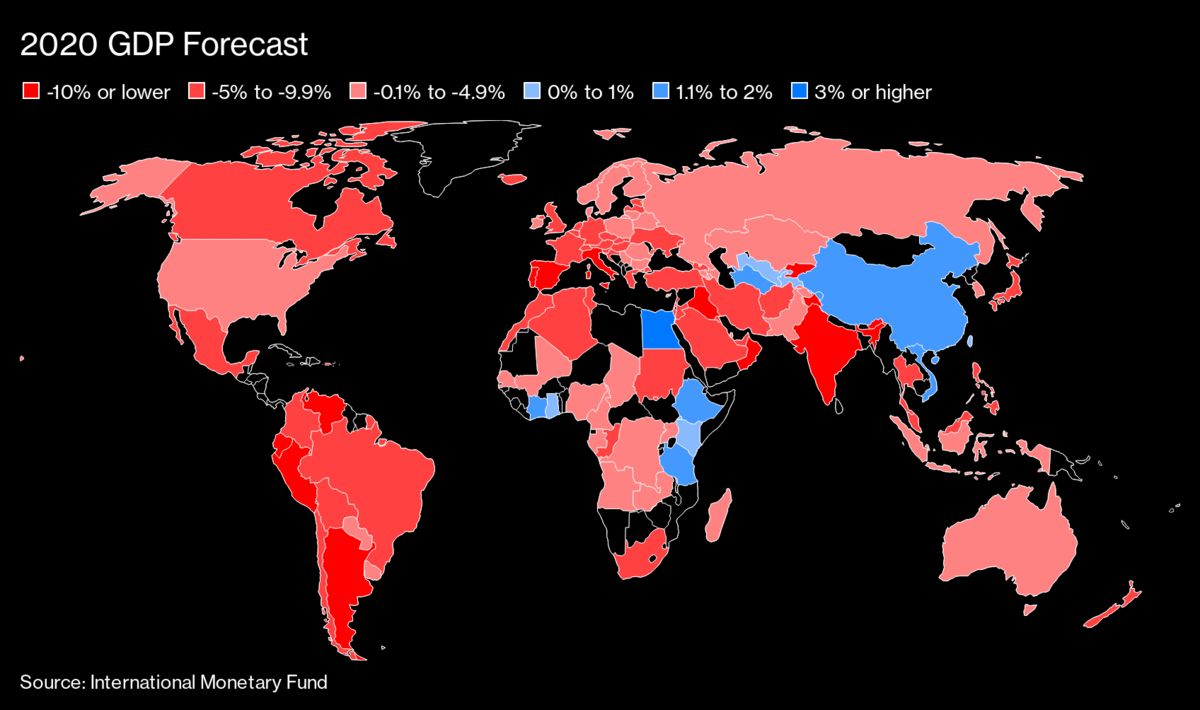 Europe is battling a resurgence of Covid-19 infections, with restrictions, curfews and pub closures to control the outbreak threatening to knock the wind out of the recovery.

This week saw governments across the continent impose new rules on movement, most notably in London and Paris, as well as a surge in cases that could add to the economic damage by curtailing consumer behavior.

Surveys of activity due next week may add to the pile-on of bad news in the region. For some European Central Bank policy makers, the arguments are already mounting that more stimulus is needed, but not everyone is on board just yet. December will be the month for action, according to Bloomberg reporting.

Here are some of the charts that appeared on Bloomberg this week, offering insight into the latest developments in the global economy:

Investor confidence in the outlook for Germany’s economy fell in October, dropping even the most pessimistic estimate in a Bloomberg survey. Excluding the move at the start of the pandemic, it was the biggest one-month decline in more than four years. According to the ZEW, the summer euphoria during the initial rebound “seems to have evaporated.”

U.K. job cuts jumped the most on record in the three months through August even as the lockdown eased. The situation could worsen further. The country is heading into a toxic mix of new restrictions and reduced job subsidies, leaving many businesses with little choice but the reduce staff numbers.

Higher unemployment means less money in pockets and the potential for financial strains that lead to a spike in defaults on mortgages, credit cards and other loans. According a Bank of England survey of lenders, banks are worried about such an outcome, and they expect default rates to increase to the highest since the financial crisis.

Retail sales topped forecasts in September with a broad-based advance, wrapping up a robust third-quarter rebound for household spending. Elevated savings, support from temporary extra jobless benefits and continued hiring have encouraged shoppers, though momentum in spending is threatened by a new acceleration in coronavirus infections and Congress’s failure to agree on a fresh stimulus package.

A pair of Federal Reserve regional factory reports showed manufacturing is sustaining its recent momentum into the fourth quarter. Data from the Philadelphia Fed showed the strongest growth in factory orders since 1973, while a report from the New York Fed included the fastest pace of bookings and shipments in three months.

China is cementing its status as the world’s dominant trading nation, confounding warnings that a once in a century pandemic combined with simmering tensions with the U.S. would derail that status.

The Covid-19 pandemic will produce lasting shifts to global growth, pushing China even more to the forefront. The proportion of worldwide growth coming from China is expected to increase from 26.8% in 2021 to 27.7% in 2025, according to Bloomberg calculations using International Monetary Fund data.

The International Monetary Fund warned that the world economy still faces an uneven recovery until the coronavirus is tamed even as it offered a less-dire view of this year’s recession following massive stimulus from central banks and governments.

Central banks put their printing presses into overdrive this year as governments opened the fiscal floodgates to cushion the economic blow from the coronavirus.

A Bloomberg Economics model of fiscal and monetary interaction in four big advanced economies during the pandemic shows fiscal policy had a material impact, especially in the U.K and the euro area, where it was generally both timely and well targeted.