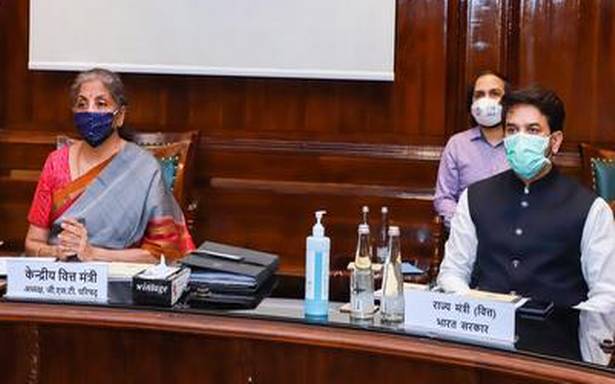 This was the third meeting in a row that discussed compensation shortfall without a decision.

The Goods and Services Tax (GST) Council failed again on Monday to reach an agreement on the contentious issue of borrowings to meet shortfalls in cess collections used to recompense the States for revenue losses from the indirect tax implementation.

Finance Minister Nirmala Sitharaman, however, said the Centre is ready to help the States who have decided to borrow to bridge the cess shortfall.

“There was no consensus arrived on a matter on which differences exist. The GST Council can certainly take a call on cess, extending the period of cess collection. That was repeatedly reiterated but among the members themselves, the question was — can the GST Council decide if the Centre should borrow or the States should borrow,” Ms. Sitharaman said.

Refusing to call the impasse a dispute or battle with 10 Opposition-ruled States who have been demanding that the Centre must borrow instead of its push for the States to do so, Ms. Sitharaman said the Finance Ministry was ready to facilitate the States who have decided to borrow themselves to meet urgent spending to counter the pandemic.

The Centre has argued that 21 States have backed this resolution.

Parrying queries on the Centre’s strategy in case some States move the apex court on the issue, Ms. Sitharaman said, “We are open to talk with all States who wants us to facilitate a borrowing. Even tomorrow morning, if they come, we are ready to do so.”

Kerala Finance Minister Thomas Isaac said Ms. Sitharaman’s announcement that she is going to permit 21 States to borrow is illegal. “Option one involves deferment of compensation payment beyond five years for which a Council decision is necessary as per the Attorney General’s opinion. No such decision has been made in the Council,” he said in a late-night tweet.

“While concluding the meeting, I did say – can the Council stop another State from what it wants to do? If the States want to, on the back of the confidence that the cess collected over an extended period will pay for the borrowings, can anyone or the Council stop a member from doing that?” the Minister said, while briefing the media late on Monday.

“I appealed to every one of the members to say what answers to give those States who need money soon… all are fighting COVID-19 on the ground. So that’s how this GST Council ended,” Ms. Sitharaman said, stressing that she doesn’t think a State can be disallowed from doing what it want to do. “Many States compared it to the UN Security Council, but is this such a Council where some States can veto a move,” she asked.

If the borrowings to meet the revenue shortfall from cess collections were done by the Centre, it would lead to an escalation in borrowing costs for the entire economy, including the private sector, the Finance Minister said.

“We have already issued a borrowing calendar and if we expand it, the yield on government securities will go up, borrowing costs will go. At a time when India is looking for more money to borrow and invest, can we afford it? The impact won’t be as much if States were to borrow,” she explained.