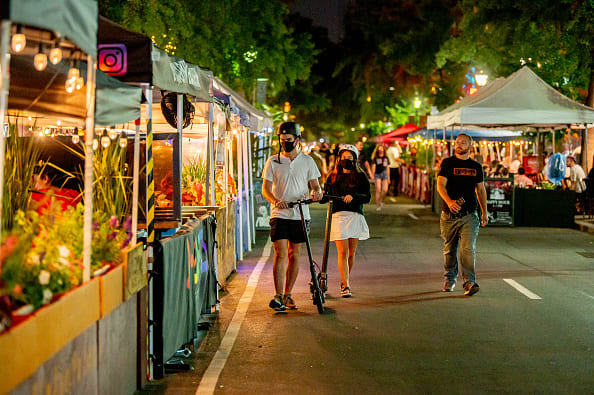 Heading into 2020, the restaurant industry was poised for another year of growth.

One of operators' biggest concerns was the shortage of workers to keep up with demand. Delivery was lifting revenue, although it remained a small part of the overall business.

But the coronavirus pandemic flipped the industry on its head, leading millions to lose their jobs and a substantial portion of restaurants to close permanently as consumers changed how and where they ate.

More than six months after states implemented stay-at-home orders, over 100,000 bars and restaurants — or 15% of all eating and drinking establishments — have permanently closed, according to National Restaurant Association estimates. The trade group forecasts $240 billion in restaurant sales will be lost this year to the pandemic.

Not all facets of the restaurant industry are in such dire straits. Fast-food chains are seeing customers return after abandoning their greasy burgers and fries years earlier in favor of healthier options. Consumers are also adopting third-party delivery apps at an accelerated pace, compressing years of growth into months.

"I think restaurateurs are going to have to think increasingly more systemically about if food in the home is going to become much more the norm," said Oliver Wright, global lead of Accenture's consumer goods and services practice. "In terms of what we eat and where we eat, it's probably going to be the biggest shakeout we've seen in our adult lifetimes."

The Paycheck Protection Program was meant to stem some of the losses, but the government plan's imperfections became more obvious as the pandemic stretched on and operators quickly ran through the eight weeks of funds it provided. In August, restaurant sales were down 34% on average, according to a restaurant association survey of more than 3,000 operators.

Relaxing zoning rules to provide outdoor dining options and reinstating indoor dining with capacity limits has brought back some sales, but each spike in coronavirus cases has usually been followed by more caution from consumers. And now the world has reached a grim milestone, the pandemic death toll has surpassed 1 million lives globally.

The devastation of the restaurant industry has also meant millions of lost jobs. The leisure and hospitality sector had the highest rate of unemployment in August at 21.3%, although it is down significantly since April, according to the Bureau of Labor Statistics. For those who have held onto their jobs, the pandemic has brought increased scrutiny to their working conditions, low wages and, in some cases, lawsuits against their employers.

Industry experts and analysts expect further decimation. Cold weather will usher in an end to outdoor dining and a potential second wave of infections, which could mean another round of lockdowns. A recent report from the Centers for Disease Control and Prevention linked restaurant dining to increased risk of contracting Covid-19, although the restaurant association has called the study's methodology flawed and said it is irresponsible to pin the spread of the virus on one industry.

"[The virus] is not a three-month, six-month challenge. This is something that is going to be long time sustained, and the restaurant sector is going to be so negatively impacted as result of this," said Wright.

In the short term, more consumers are expected to do most of their eating and drinking at home, after years of moving in the opposite direction. An Accenture survey in June of more than 8,800 consumers found that 70% plan to do most of their dining and hospitality at home for the next six months. That likely means takeout and delivery orders, as well as more cooking. Many consumers have become more adept in the kitchen after it became their only option in the early days of lockdowns.

Chain restaurants have fared much better than independent establishments, and fast-food eateries in particular have seen their sales rebound the fastest, thanks to cheap deals, quick service and the convenience of their drive-thru lanes. Technomic is projecting that the fast-food sector's market share will grow about 8% this year.

Domino's Pizza and Papa John's are among the most obvious winners, as consumers quickly transitioned to order their pizzas for delivery during lockdowns. But burger chains like McDonald's and Wendy's, which saw sales take deeper dives in March and April, also reported relatively speedy rebounds to their U.S. businesses.

The disparity between the fast-food sector and full-service restaurants is also reflected in restaurant stocks. Shares of Olive Garden parent Darden Restaurants have fallen about 8% this year, while Dine Brands, owner of IHOP and Applebee's, has seen its stock tumble 32%. On the flip side, McDonald's stock is up 11% and Wendy's shares are flat in 2020. Shares of fast-casual chain Chipotle Mexican Grill have gained more than 50% year to date, adding more than $11 billion to the company's market value.

Jim Stevens, president of the Golden Chick restaurant chain, said the company saw its sales dive 15% at its more than 190 locations in Texas, South Carolina, Oklahoma and Florida during the five weeks after stay-at-home orders were put in place. But the fried chicken chain's second-quarter same-store sales rose 21%, and its third quarter is on track for a 26% increase. Drive-thru sales account for about 85% of its business now, compared with about two-thirds before.

Stevens credits the quick turnaround in part to the $1,200 stimulus checks and higher unemployment benefits. Golden Chick didn't cut back on its marketing or advertising spending or furlough workers. It kept rolling out new products, including a popular partnership with Fletcher's Corny Dogs, a Texas State Fair icon. Stevens is predicting a full rebound for the fast-food industry next year, but he doesn't think it will completely return to its previous way of operating.

"I frankly don't ever see the idea of masks and gloves and that kind of safety precaution going away in the industry," Stevens said.

Wright expects that consumer spending will shift back to independent restaurants as their safety fears are assuaged and they want to support local businesses.

"A lot of outlets have struggled to get the message out about being open, making it easy to book, the ability to physically manage the space so consumers feel safe," he said. "In the short term, there has been a bit of flight to safety and some of those aspects."

Analytics platform Second Measure found that sales for meal delivery services grew 158% during August from a year earlier. Consumers are also less loyal to a specific delivery app than two years ago, ratcheting up pressure on the companies, although Second Measure data shows DoorDash remains the market leader.

The surge in demand, however, has also renewed scrutiny of the companies from regulators and consumers. Cities across the country, including San Francisco and New York, levied temporary caps on the fees that DoorDash and others can charge for every order. Restaurant owners had long been lobbying for such action, citing their already razor-thin profit margins.

Also, consumers increasingly are paying attention to how delivery apps operate. Under normal circumstances, restaurants can pay as much as 30% in commission fees for an order handled by the companies. Some chefs and restaurateurs took to social media to raise awareness for the kinds of fees that they have to pay, motivating their loyal customers to call directly for their orders or swing by in person.

The 132-year-old New York Katz's Delicatessen, for example, recently launched its own delivery on its website after scaling back its presence on third-party delivery websites.

"I needed customers to see how much they price gouge and how terrible they really can be, and I needed that buy-in from the customer before I could do something like this, which we've been wanting to do for a little while now," owner Jake Dell said.