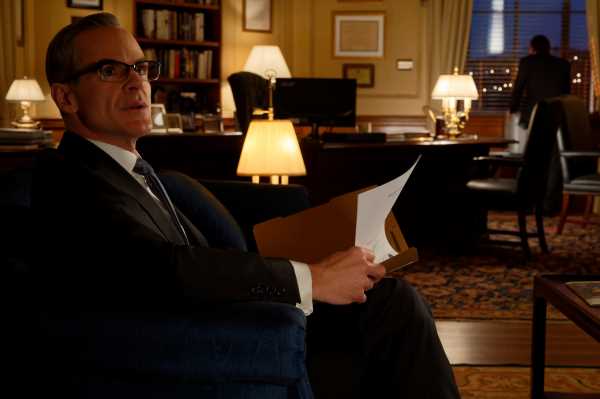 Michael Kelly says rewatching this clip from The Comey Rule with fellow actor Brendan Gleeson is as "infuriating, startling, and unnerving as it was to film."

Showtime's two-part mini-series, The Comey Rule, on President Donald Trump's relationship with the FBI Director James Comey, and the rest of the bureau before and after the 2016 election, will premiere Sunday night. Kelly portrays former FBI Deputy Director Andrew McCabe while Jeff Daniels portrays Comey and Gleeson takes on the role of Trump.

"I love it though, because it shows one of the ways in which McCabe stands up to the president when most wouldn’t," Kelly, 51, tells PEOPLE.

According to the show's official description, The Comey Rule "tells the story of two powerful figures, Comey and Trump, whose strikingly different personalities, ethics and loyalties put them on a collision course."

In the series, McCabe is a central figure in the investigation into Trump's relationship with Russia, who is currently in the midst of a court battle after alleging he was fired by the FBI in 2018 for political reasons after he fell out with Trump.

Kelly tells PEOPLE portraying McCabe was a "great honor" because he's someone he holds in "high regard."

But filming a series about a key period in the tumultuous Trump presidency while the 2020 election is on the forefront of many Americans' lives is something that left Kelly feeling unnerved, but "proud." "There is no denying there was foreign interference in our election in 2016, and there is zero doubt that it is happening again in 2020," Kelly says. "To tell this story and perhaps remind people, in a time of constant barrage of political norms being shattered, that this happened and is happening again feels good."

Among other stars in the series are Holly Hunter, who plays former Acting Attorney General Sally Yates, Jennifer Ehle as Patrice Comey, Peter Coyote as Robert Mueller and Kingsley Ben-Adir as Barack Obama.

Adapted for TV and directed by Oscar-nominated screenwriter Billy Ray, The Comey Rule will premiere Sunday at 9 p.m. ET and conclude with part two on Monday night.