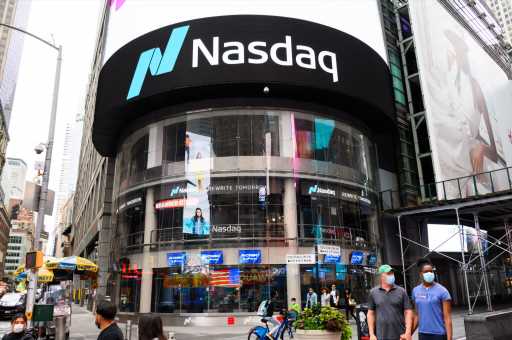 U.S. stock futures rose Wednesday, with the Nasdaq tracking for a third session of gains as tech stocks continued to dig out of last week's hole. However, the Nasdaq, as of Tuesday's close, remained more than 7% below its Sept. 2 record high. The Dow Jones Industrial Average and S&P 500, which on Tuesday each locked in three-session winning streaks, were still 5% off their record highs on Feb. 12 and Sept. 2, respectively.

The government said Wednesday morning that August retail sales rose 0.6%. Economists had expected an increase of 1.1%.

At the conclusion of its two-day September meeting Wednesday afternoon, the Federal Reserve releases its latest policy statement and its quarterly update on where central bankers see economic growth, unemployment and inflation going. Fed Chairman Jerome Powell then holds a news conference.

Snowflake, a provider of cloud-based data storage and analysis software, is set to begin trading Wednesday on the New York Stock Exchange after pricing its initial public offering above its increased range. Snowflake is selling 28 million shares at $120 each. Last week, Snowflake revealed in a filing that Berkshire Hathaway and Salesforce bought into the IPO.

Another stock that's expected to be a mover on Wall Street on Wednesday is FedEx. Shares soared about 9% in the premarket after the delivery giant reported better-than-expected quarterly earnings and revenue. Price hikes, lower fuel costs and efficiency gains countered negative impacts from the pandemic-driven surge in less-profitable residential deliveries.

Shares of Eli Lilly were higher in Wednesday's premarket after the American drug maker announced proof-of-concept data for a neutralizing antibody, showing a reduced rate of hospitalizations for Covid-19 patients. "Lilly intends to quickly publish the results of this interim analysis in a peer-reviewed journal and discuss appropriate next steps with global regulators," the company said in a press release.

Numerous design, management and regulatory failures during the development of the 737 Max preceded the "preventable death" of 346 people in two crashes of the popular Boeing jetliner, according to a damning congressional report released Wednesday. The report, in the works for about 18 months, comes as regulators are in the final stretch of work to recertify the planes. The 737 Max has been grounded worldwide since March 2019, following the second of two fatal crashes. Shares of Boeing, off over 55% in the past 12 months, were little changed in Wednesday's premarket.

4. Trump says he has no regrets about Covid-19 response

President Donald Trump denied he had downplayed the threat of the coronavirus, claiming he "up-played" the dangers through his actions. Trump, speaking Tuesday at an ABC News town hall event with voters in Philadelphia, also said he didn't regret anything about his response to the pandemic. The president's assertions came less than a week after the release of audio from a March interview for veteran journalist Bob Woodward's new book, in which Trump said, "I wanted to always play it down. … I still like playing it down, because I don't want to create a panic."

Sally made landfall early Wednesday near Gulf Shores, Alabama, as a Category 2 hurricane, with torrential rain and damaging storm surge. Forecasters expect Sally to bring "catastrophic and life threatening" rainfall over portions of the Gulf Coast, Florida panhandle and southeastern Alabama throughout the day and into the evening. More than a quarter of U.S. offshore oil production was shuttered in preparation for the storm. Sally is the 18th named storm in the Atlantic this year, and the eighth tropical storm or hurricane to hit the United States in 2020.

— The Associated Press and Reuters contributed to this report.