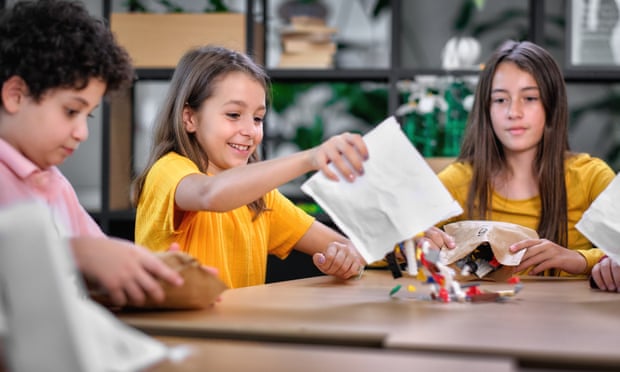 Lego is to start phasing out the single-use plastic bags used to package loose bricks in boxes from early next year, as it steps up efforts to make its products and packaging more sustainable over the next three years with a $400m (£310m) global investment.

The Danish toymaker, which aims to make all its packaging sustainable by the end of 2025, will replace the clear plastic bags with easy-to-open recyclable, sustainably sourced paper bags – certified by the Forest Stewardship Council – as part of a new trial.

Prototypes made from a range of different sustainable materials have been tested by hundreds of parents and children. Lego has already reduced the size of its boxes by 14%.

Lego’s millions of younger fans across the world have been instrumental in helping to bring the move forward, said the Lego Group chief executive, Niels B Christiansen: “We have received many letters from children about the environment asking us to remove single-use plastic packaging. We have been exploring alternatives for some time and the passion and ideas from children inspired us to begin to make the change.”

In 2015, the the family-owned toymaker, one of the world’s most popular brands, set a target to make its products from sustainable materials by 2030.

Lego bricks have been made with a strong, oil-based plastic known as acrylonitrile butadiene styrene (ABS) since 1963, although other pieces in its sets do not need such strong materials.

Two years ago the first Lego pieces made from plant-based bio-plastic sourced from sugar cane went on sale, initially more “flexible” pieces such as green leaves, bushes and trees, although since extended further to cover dragon wings and carwash brushes. The company has pledged to expand its use of this material, which currently accounts for less than 2% of all pieces.

It is continuing to search for a replacement for ABS in the majority of its bricks. Earlier in September, Lego reported a 7% global sales rise year on year in the first six months of 2020 due to more families playing together during lockdown and “more adults than ever before” buying its harder-to-build sets.