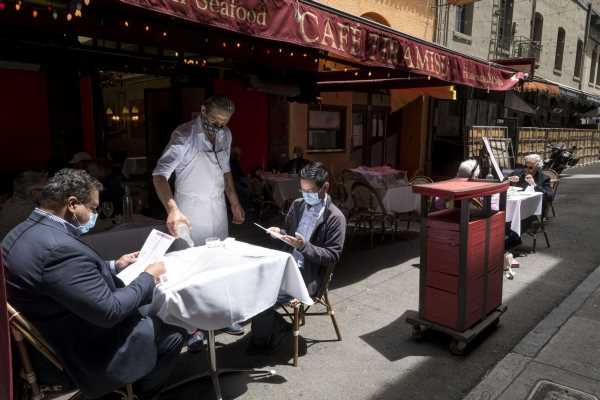 The U.S. labor market’s rebound is increasingly at risk of being cut short after a survey showed employment dropping sharply this month.

The number of employed Americans declined by about 6.7 million from mid-June through mid-July, including a 4.1 million plunge from the first to the second week of July, according to the Census Bureau’s weekly Household Pulse Survey published Wednesday.

While that figure isn’t seasonally adjusted like the main figure in the monthly jobs report, the increase of 5.5 million from mid-May through mid-June — roughly coinciding with the monthly survey for the Labor Department’s jobs report — was in line with the reported rise in unadjusted payrolls from June.

The figures add to signs of a worsening employment picture as a coronavirus surge across the South and West forces officials to pause or reverse reopenings, while business closings multiply and lawmakers clash over how to extend aid programs on the verge of expiring. Analysts were already expecting July’s job gains would — at a minimum — slow significantly from June’s 4.8 million seasonally adjusted increase.

The Census survey suggests that “the July jobs report could be not only weakened, but even possibly negative,” said Ernie Tedeschi, an Evercore ISI economist who highlighted the data Wednesday on Twitter. “That should give us pause, because it implies that the recovery hasn’t taken hold, and in fact may be reversing right now.”

While the Household Pulse Survey is a relatively new poll, it “did quite well” in predicting the June jobs report, Tedeschi said.

The data also precede Thursday’s release on initial jobless claims, which analysts forecast to be unchanged from the prior week at 1.3 million — potentially snapping a 15-week streak of declines dating back to early April. Estimates range from 1 million to 1.55 million.

Meanwhile, Kronos, a software and services company that tracks time-clock punches — and whose data were in line with labor-market pickups in May and June — said growth in worker shifts has slowed in July. Shifts have risen an average 0.7% so far in July, compared with 1.9% in June, a sign the recovery is plateauing, the firm said in a report.

— With assistance by Alexandre Tanzi, and Katia Dmitrieva