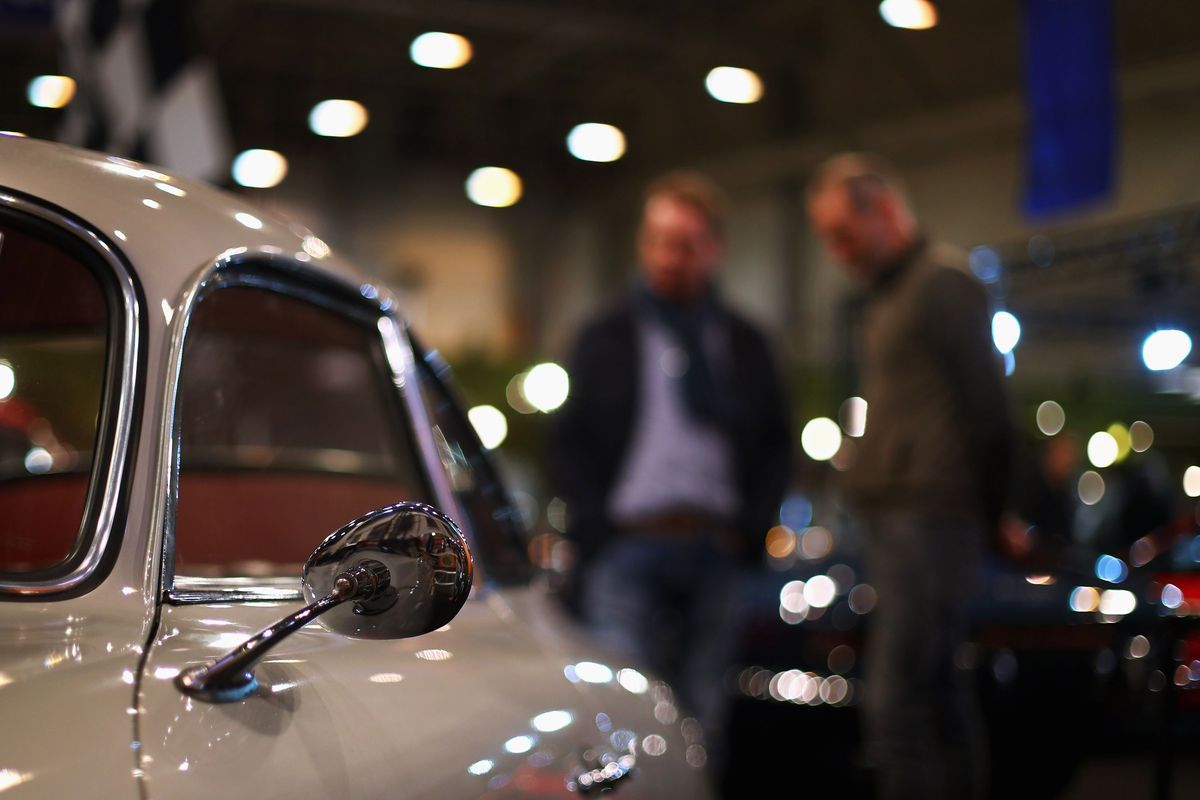 Car aficionados close to Afshin Behnia have long known that the founder and CEO of the classic car enthusiast website Petrolicious often posted messages on his personal Facebook account brandishing the #MAGA2020 hashtag, describing “lefties” as “monsters,” and advocating bullets for “liberals.”

But over the past month, Behnia’s musings grew more aggressive as the Black Lives Matter movement progressed nationally, and what was were once viewed as provocative but harmless comments among friends and insiders began to take a darker turn.

As those and similar posts were shared among larger circles they began to disturb a larger audience. As a result of the ensuing controversy, Behnia has said he is stepping down from his role as CEO and has put the company up for sale. “We have been in talks with a number of potential buyers and investors for the last 12 months,” Behnia told Bloomberg July 1. “But this has certainly pushed it over the edge.”

On July 10, he made the move official with an announcement on the Petrolicious Instagram account. “Today I have decided that it is in the best interest of Petrolicious, our fans, and its future clients, for me to step down and let new owners carry Petrolicious forward,” Behnia wrote.

On June 30, Behnia published a statement on the Petrolicous Instagram page defending his “nature and values” and noting that his Iranian heritage has made him “no stranger to racism.” But he acknowledged that the posts hurt his company image.

“I absolutely realize that my poorly worded post was also divisive and did not acknowledge the good people of the [BLM] movement and their positive contributions,” he wrote. “I’m truly sorry for that. I’m sorry to have let down our fans, and I hope to be able to re-earn your trust.”

The fall-out has cost Petrolicious sponsors and supporters, financial and otherwise. Turtle Wax, a longtime sponsor, has announced it will sever all ties with the brand and told its social-media influencer pool to avoid cross-contamination of the brands. Ditto eBay Motors. A spokesman for Hagerty, which sponsored drives and purchased advertising, said the company will no longer be working with Petrolicious. A spokesperson for Chopard, a regular advertiser, declined to comment.

A spokesman from Porsche, while noting in an emailed comment that the automaker does not currently have any advertisements with Petrolicious in the United States, said, “We’ve read the comments attributed to Afshin Behnia and strongly believe there is no place in our society for racial discrimination.” In 2017 and 2018, Porsche financed multiple marketing campaigns shot and produced by Petrolicious employees.

More than a dozen former fans and brand members reached by Bloomberg have cancelled their Petrolicious subscriptions or officially disassociated with the brand, which counts 746,000 Instagram followers and 831,000 YouTube followers. Hundreds more comments on the Instagram post announcing his departure note their disapproval and disappointment with the brand, including some saying they’ll “not follow” Petrolicious any more. There are also many commenters in the same thread who voice support for Behnia and decry the “cancel culture” of today’s internet.

“I wrote to cancel my membership,” said Noah Goldman, one of the first on social media to make public Behnia’s Facebook posts. “I’m a petrolhead, but I don’t need that.” Niki Byrne, a Petrolicious photography contributor who says Behnia once courted her for the role of managing editor for the site, posted a statement on Instagram saying she would not work for the brand again. But hundreds of other commenters offered Behnia support and disbelief at his untimely resignation.

On July 7, Petrolicious sent an email to its vendors informing them that Petrolicious “will not be accepting any invoices after 5pm PST today from anyone, even if he/she claims that the work was done.”

“The shop is being put on hold while Petrolicious transitions to new ownership,” the letter noted. It also announced that Molly Tapp, the Petrolicious director of e-commerce, had also resigned. After conversations with other Petrolicious staffers, it was unclear what other of the current Petrolicious permanent staff would remain at the company or depart.

Multiple parties are in the process of bidding to buy the company he founded in 2013, Behnia said, though he declined to name which ones. He had contemplated selling his passion project for the past year, but the events of the past week have “pushed it over the edge,” he said. Bloomberg spoke to the founder of a similar luxury lifestyle brand which at one point had been in talks to purchase Petrolicious—but who has since reconsidered as a result of the fallout from Behnia’s posts. That founder requested anonymity due to the negative attention around the issue, which the founder said has significantly devalued Petrolicious.

“Certainly there has been a negative hit,” Behnia told Bloomberg when asked about the impact of his posts on the brand.

Behnia immigrated to the United States from Iran in 1979, and began his career as a tech entrepreneur, eventually selling his legal software startup in 2011 and pooling resources with his wife, former Disney executive Kika Vigo-Behnia, to start a new brand that focused on his real love—classic Alfa Romeo cars.

He built Petrolicious first as a website to showcase and celebrate expensive vintage automobiles, especially his beloved Alfas. It soon blossomed into a global media brand with an associated Youtube channel and social media accounts, Petrolicious-sponsored drives and an online marketplace for selling used cars. It also commanded a tidy business making videos for corporate accounts and wealthy private collectors.

Signature content included indulgently-shot videos, in-depth articles and glossy photography—all expounding upon the joys of classic cars and the need to “drive tastefully,” its well-known catchphrase. At a high point in 2015, Petrolicious counted more than 400,000 monthly visitors and 250,000 total subscribers, though at that point it still had not turned a profit. Behnia did not respond to a request for comment on whether the company ever became profitable; Bloomberg could not obtain a current subscriber number.

“It was kind of a kingmaker company,” said Byrne, noting that car restorers, photographers and drivers featured on its pages earned swift acclaim—hundreds more social media followers; increased business to their workshops; buyers for their collectable BMWs, Mercedes-Benzes, Jaguars, Lancias and Porsches. “They were cranking out amazing content,” she explains.

“Afshin, in the enthusiast community, I looked at as a kingmaker,” echoes Goldman, who owns a fraud-detection software company and works in real estate. “He was like the holy grail. To be a part of his [car races]—this whole thing that he pitched and built around himself—was really incredible.”

“I can’t think of any automotive media platform that has been more inspiring and influential in my life,” said Dorian Valenzuela, an Alfa Romeo specialist collector and mechanic, in a lengthy Instagram post July 1. “To be honest I always took [Afshin] to be an intellectual and inclusive person because of the platform he had created. This is why I was shocked when after we became Facebook friends I realized what his views were.”

Valenzuela said he thought the Black Lives Matter posts were “some type of dark humor or sarcasm” but quickly realized Behnia wasn’t joking. The more recent events of 2020 seemed to further radicalize him, Valenzuela said: “I feel his feed went from ‘distasteful’ to what I consider awful.”

The recent private Facebook posts became more widely known in early June as Goldman and Valenzuela started circulating them on social media and in group text messages because they were so offended. On June 29, a blog called Tiremeetsroad.com reported about it; on June 30, Jalopnik.com did the same.

Paul Zuckerman, an attorney, discerning car collector and popular automotive podcast co-host, described the impact of the posts as their circulation expanded in the public sphere.

“It’s a form of suicide,” he said. “In this day and age for anybody with a public Instagram internet company to say what he said? Nobody wants to support people that take the positions he’s taken.”

At a company-wide emergency meeting June 29, Behnia said he had a right to post his own opinions on his own Facebook pages, telling employees that his personal beliefs did not affect corporate operations. (In an Instagram post June 30, a former Petrolicious employee, Ted Gushue, noted that Behnia actively monitored and blocked comments on the website that questioned or chastised some of his own views. Behnia did not respond to a request for comment on this statement.)

During the July 1 call with Bloomberg, Behnia said he made the posts to decry the violence he believed leaders of the BLM had perpetrated or encouraged: “When you have a leader of the BLM saying if we don’t get everything we want we are going to burn everything down…that’s what I’m speaking out against,” said Behnia, who identifies as “a very small government libertarian at heart.”

The Instagram post containing his apology statement garnered more than 13,300 likes and 3,000 comments at last check. Behnia has followed them closely.

“I’ve been very fortunate to see a lot of support,” he said. “I think roughly speaking there is maybe 30 to 40 percent of the sentiment is very negative. And then there are a lot of people chiming in saying, Hey, I don’t see anything wrong with what he said.”

Certainly, Behnia retains friends and supporters; aside from the hundreds of comments on social media, he said he has received many direct messages from people who say they agree with him.

Gushue, who now edits Porsche’s internal Type 7 magazine, told Bloomberg that although he does not endorse Behnia’s opinions, he supports Behnia’s right to express his beliefs and thoughts. “But he chose a really callous way to express them at a very sensitive time for our community and our country,” Gushue said.

Under new ownership, the brand will have to work to overcome the negative impression built by Behnia’s public posts, say current and former employees.

Behnia agrees it’s critical for him to step away. “I think it’s important to the brand that I not be involved,” he said July 1. “This way you know all the great people who have worked with Petrolicious can continue to do so.

“I like a lot of the people who work for Petrolicious—they’ve worked so hard to build it up,” said Byrne, the former contributor. “If someone else were to clean up the business, then yeah, it might recover. We would need new management, a new style, a clear apology—a totally new mission statement.”